Here we are, nearly ten years after the financial crisis. The financial services industry is so heavily subsidized as to not be properly considered to be private enterprise, yet even mid-level people get pay packages that would outrage any voter if an elected official made that much.

But the inadequate new regulations imposed in the bust and the less attractive profit prospects resulting from the super-low rates have some bankers chafing. Big-name players have been going West to the greener pastures of Silicon Valley.

By Sarah Anderson, who directs the Global Economy project at the Institute for Policy Studies and is the author of the new report Off the Deep End: The Wall Street Bonus Pool and Low-Wage Workers. Originally published at Alternet

Every year, the New York Comptroller releases a big number representing the combined value of the bonuses Wall Street banks have doled out to their employees. The state government keeps track of these payouts because a really big number boosts their local tax base. And this year’s number, released March 15, is indeed gigantic: $23.9 billion.

But imagine if those huge sums were channeled instead into the pockets of low-wage workers. The economy would get a much bigger bang for the buck because the poor tend to spend nearly every dollar they earn, creating beneficial economic ripple effects. The wealthy, by contrast, can afford to squirrel away more of their earnings. And so while the Wall Street bonus season may coincide with an uptick in luxury goods sales, a minimum wage hike would give America’s economy a much greater boost.

A new Institute for Policy Studies report includes four dramatic charts that reveal how the increase in Wall Street bonuses has far outpaced the rise in the federal minimum wage — and how this in turn has contributed to race and gender inequality.

Wall Street banks doled out $23.9 billion in bonuses to their 177,000 New York-based employees, which amounts to 1.6 times the combined earnings of all 1,075,000 Americans who work full-time at the current federal minimum wage of $7.25 per hour. 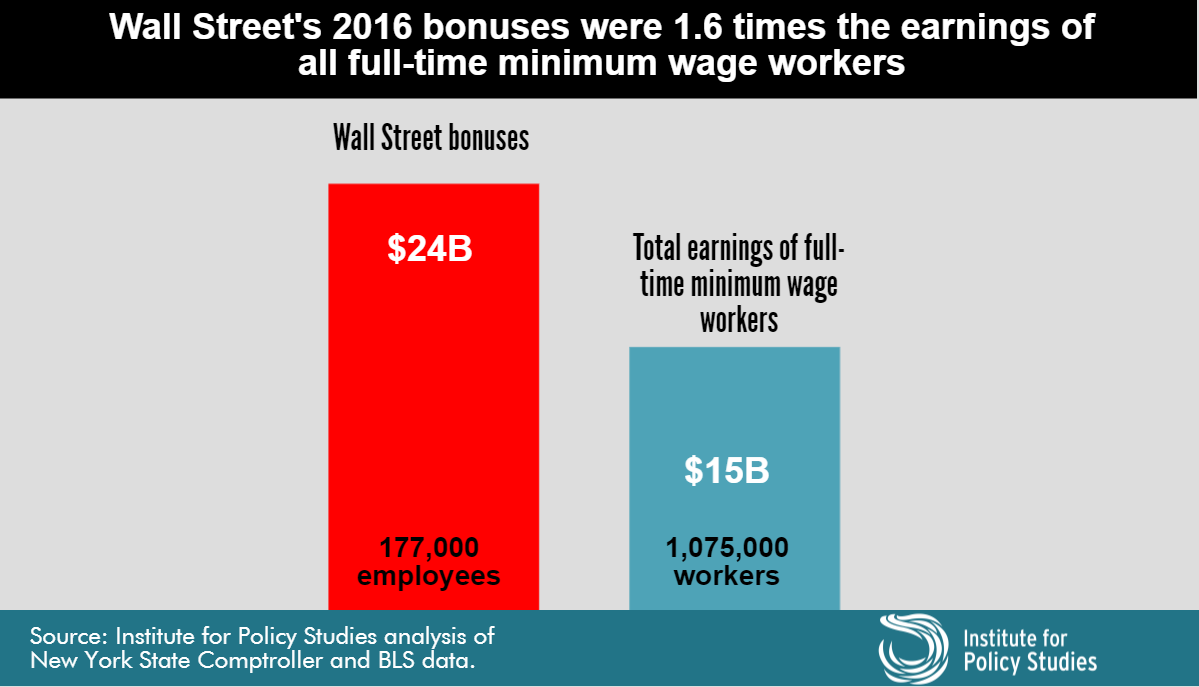 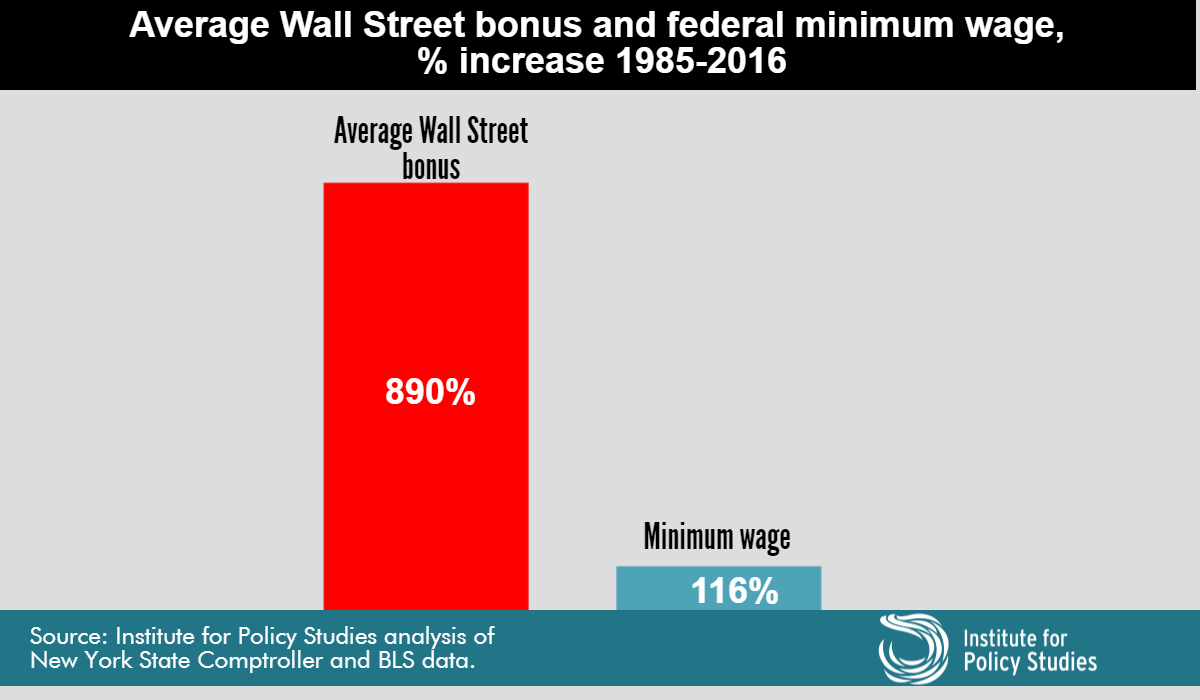 The Race and Gender Divide

Over the past three decades, the dramatic rise in average financial industry bonuses relative to the minimum wage has contributed to racial and gender inequality. Workers at the bottom of the national wage scale are predominantly people of color and female, whereas those in Wall Street’s upper echelons are overwhelmingly white and male.

At the top five U.S. investment banks (JPMorgan Chase, Goldman Sachs, Bank of America, Merrill Lynch, Morgan Stanley, and Citigroup), the share of executives and top managers who are white ranges from 84 to 87 percent and the share who are male ranges from 66 to 84 percent, according to the firms’ own reports (see sources section). By contrast, only 44 percent of minimum wage workers are white and an even smaller share, just 37 percent, are male.

For Wall Street employees, annual bonuses come as an extra reward on top of their base salaries, which averaged $388,000 in 2015, the most recent year for which data are available. According to the New York State Comptroller, this is five times higher than the average salary for other New York City private sector employees. 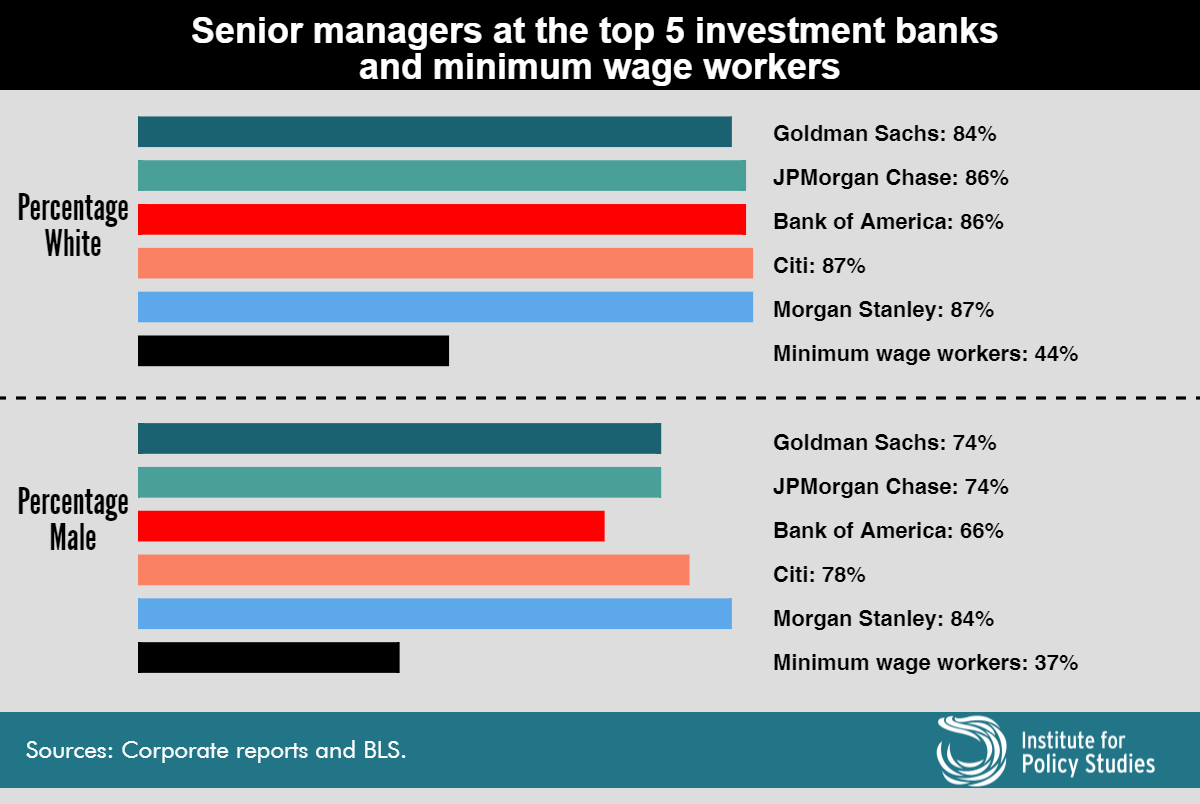 On top of their cash salary and bonuses, top Wall Street executives also typically receive massive stock options and grants, most of which are deemed fully deductible “performance-based” pay and thus fully tax-deductible for the firm. According to a 2016 Institute for Policy Studies report, the top 20 U.S. banks paid out more than $2 billion in fully deductible performance pay to their top five executives between 2012 and 2015. At a 35 percent corporate tax rate, this translates into a tax break of more than $725 million, or $1.7 million per executive per year.

While living wage campaigns have been successful in many cities, Oxfam and the Economic Policy Institute report that 44 percent of U.S. workers still earn less than $15 per hour. This is the wage level needed to cover basic living costs in most areas of the country, according to the National Employment Law Project.

The Wall Street bonus pool was large enough in 2016 to have lifted all of America’s 3.2 million fast food prep and serving workers up to $15 per hour — and still have had $776 million left over. Or that bonus pool could have raised to $15 the hourly wage of all our nation’s 1.7 million home care aides or all of our 3.1 million restaurant servers and bartenders. 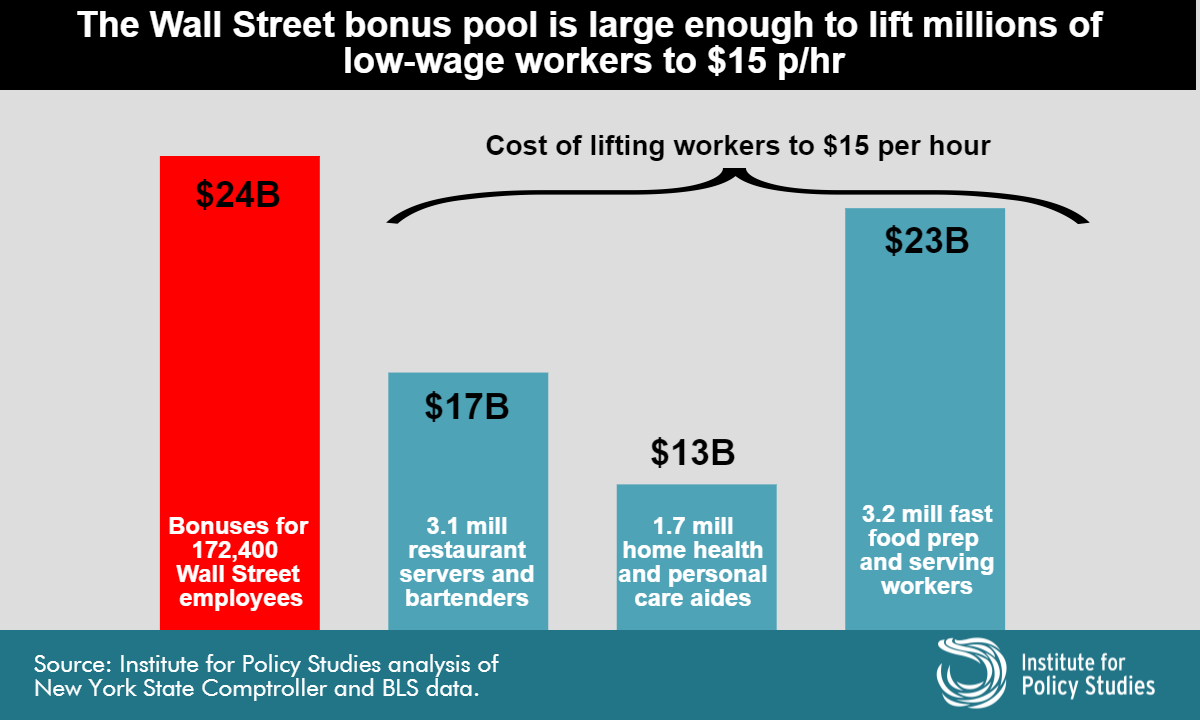 Huge Wall Street bonus payouts also encourage the sorts of high-risk behaviors that led to the 2008 financial crisis. And yet financial regulators have still not implemented a Wall Street bonus reform law that has been on the books for nearly seven years. Section 956 of the 2010 Dodd-Frank financial reform legislation prohibits financial industry pay packages that encourage “inappropriate risks.” Regulators were supposed to implement this new rule within nine months of the law’s passage.

In 2011, regulators issued a proposed rule that did not go far enough to prevent the type of behavior that led to the 2008 crash. As spelled out in detail in Institute for Policy Studies comments to the SEC, the proposed rule falls short in several areas, including overly lenient bonus deferrals, weak stock-based pay restrictions, and enforcement proposals that leave too much discretion to bank managers.

While regulators responded to criticism by agreeing to issue a new proposal, this work was not completed before the end of the Obama administration. And now with Republican control of both Congress and the White House, there is a strong chance it will be postponed indefinitely. House Republican leadership introduced a bill in the last session to repeal most of the Dodd-Frank reform package, including the Wall Street pay provision. President Donald Trump has also vowed to “do a big number” on the landmark financial reform legislation.

In the meantime, the Wall Street bonus culture that contributed to the 2008 financial crisis continues to flourish.