By Pia Hüttl, an Affiliate Fellow at Bruegel. Prior to this, Pia worked as a Trainee in the Monetary Policy Stance Division of the European Central Bank, and as a Blue Book Stagiaire at the Monetary policy, Exchange rate policy of the euro area, ERM II and Euro adoption Unit of DG ECFIN. Originally published at Bruegel

More than 55 years after the United States passed the Equal Pay Act, and 45 years after similar legislation in the UK, equal pay is still far from being a reality. In a 2016 paper, Blau and Kahn provide new empirical estimates delineating the extent of and trends in the gender wage gap and their potential explanations. The figure below shows the long-term trends in the gender pay gap over the 1955-2014 period. By 2014, women full-time workers earned about 79% of what men did on an annual basis and about 83% on a weekly basis. 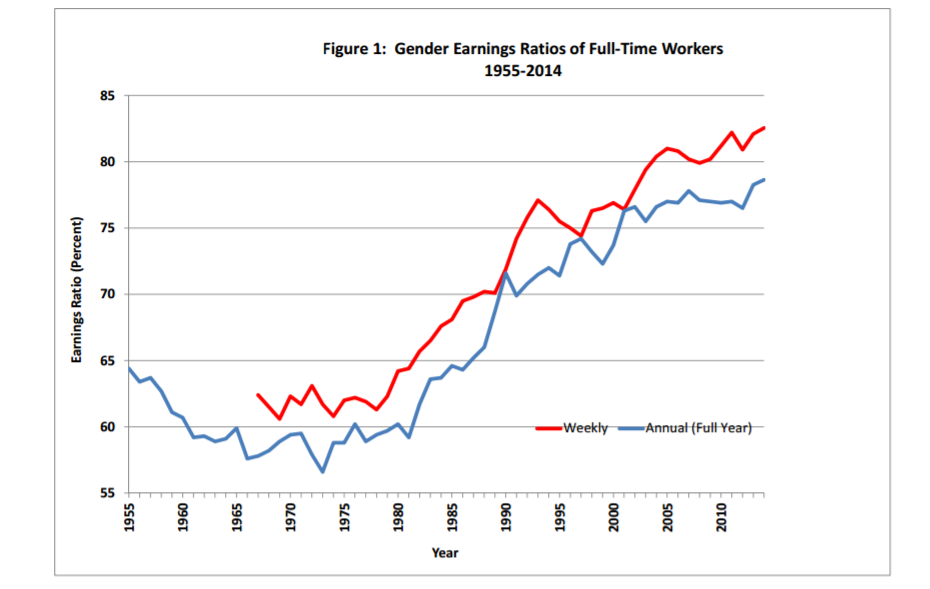 Focusing on the US, the authors find that by 2010, conventional human capital variables continue to explain little of the gender wage gap, while gender differences in occupation and industry continue to be important. Moreover, the gender pay gap declined much more slowly at the top of the wage distribution than  in the middle or on the bottom and by 2010 was noticeably higher at the top. From a literature survey they conclude that many of the traditional explanations still hold up. Women’s work force interruptions and shorter hours remain significant in high-skilled occupations, possibly due to compensating differentials. Gender differences in occupations and industries, as well as differences in gender roles and the gender division of labour remain important, and research based on experimental evidence strongly suggests that discrimination cannot be discounted.

In a study from 2010, Bertrand, Golding and Katz look at the financial industry and find that although male and female MBAs have nearly identical earnings at the outset of their careers, their earnings soon diverge. The male earnings advantage reaches almost 60 log points a decade after MBA completion.

The authors find that three proximate factors account for the large and rising gender gap in earnings: differences in training prior to MBA graduation, differences in career interruptions, and differences in weekly hours. The greater career discontinuity and shorter work hours for female MBAs are largely associated with motherhood. Controlling for these interruptions, they find no statistically significant difference in wages between male and female MBAs 10 years out.

Guy Rolnik asks himself therefore if the gender wage gap is just the consequence of unmeasured differences in the characteristics of the male and the female labour force or is it the result of discrimination against women?

Research just published by Egan, Matvos and Sera indirectly answers this question by examining another potential source of women’s discrimination in the labor market: the way they are treated when involved in misconduct. The authors find that following an incidence of misconduct, female advisers are 20% more likely to lose their jobs and 30% less likely to find new jobs relative to male advisers.

Lindemann, Rush and Tepper focus on a neglected sector when it comes to gendered income inequalities: artistic careers. Using the Strategic National Arts Alumni Project (SNAAP), a US-wide survey of 33,801 individuals who have received degrees in the arts, to assess the gendered earnings gap for artists and for non-artists, they find that the gendered earnings gap is comparable for artists and non-artists. Also, artistic careers are subject to some of the same social forces that drive disparity in other occupational realms.

Yet, surprisingly, the authors did not find the wage penalty to motherhood in the arts, which has been documented in virtually every other field. Reasons behind this may partially be related to artists’ ability to work from home and maintain flexible working hours. Another reason might be linked to the more liberal attitudes of artistically-oriented individuals. The authors cite previous research showing that artists tend to embrace more liberal ideals than those in other professions.

Maria de Paola points to similar research in the film industry, stating that such differences are of interest, as they highlight deficiencies even in the more liberal environments, because cinema reflects our society, and what we are capable of imagining. In a recent paper, Sanchez and Paniagua look at Hollywood wage structures and discrimination. Using data from the international movie database (IMDB) for the period 1980 to 2013, the authors find that there are substantial wage differences among male and female actors in Hollywood, amounting to 20% after controlling for actor and film characteristics.

The Other Gap: Employment Rates of Women and Men

Reasons to promote inclusion of women into the workforce are straightforward. On 8 March, the IMF blog published a graph on this occasion: 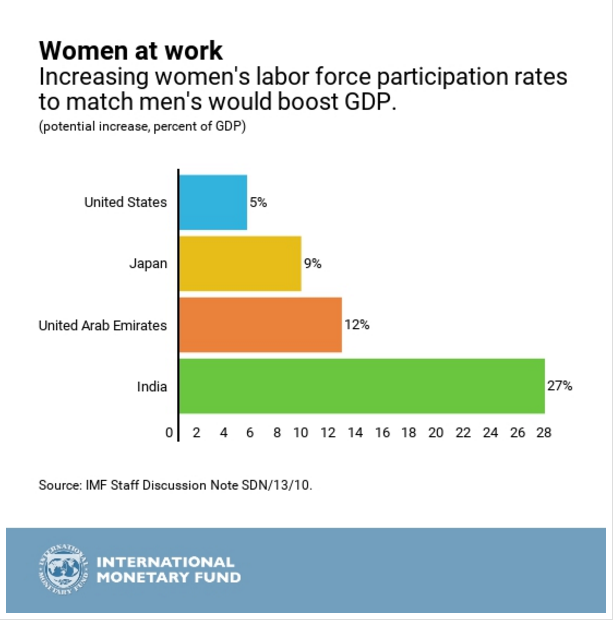 Looking at US family income between 1979 and 2013, Boushely and Vaghul from the Washington Center for Equitable Growth show that over the past four decades, women’s entry into the formal workforce has made the key difference for middle-class families and more vulnerable families on the brink.

He cites recent work by Autor, Dorn and Hanson, who state that the structure of marriage and child-rearing in U.S. households has undergone two marked shifts in the last three decades: a steep decline in the prevalence of marriage among young adults, and a sharp rise in the fraction of children born to unmarried mothers or living in single-headed households.

They find that a potential contributor to both phenomena is the decline of labour-market opportunities faced by males, which make them less valuable as marital partners. In other words, in areas where men lost manufacturing jobs to international competition, single motherhood rose sharply.

Noah Smith adds that if this negative pattern is going to be reversed, gender norms will have to change. The way forward is to accelerate the shift toward a universal view of marriage as a cooperative, equal partnership. That cultural shift will be difficult for some, but doing nothing will be even more painful.

PS: And in case you wonder how the Trump-Clinton debates would have been perceived if the genders had been reversed, click here.