Last year, Boston Fed President Eric Rosengren — considered a “dove” on the Fed’s policy-setting committee — started warning about the commercial real-estate bubble in the US and what its demise could do to banks. But in his speech on Financial Stability on March 22 in Indonesia, he added what I’ve come to call “Housing Bubble 2” to his ever more emphatic concerns.

Like all central bankers, he can’t warn publicly about an approaching problem because it could trigger the very problem he’d be warning about. In this manner, no one at the Fed saw the last bust coming. So Rosengren started out his presentation, “Financial Stability: The Role of Real Estate Values” – by clarifying this: “First, I am not here today to predict problems, but rather to suggest we continue working to head them off.

The phrase, “continue working to head them off,” is ironic because he also pointed out what has caused these problems: “very low interest rates” that were “wholly necessary” and that he “strongly supported.”

But the Risks Are Massive.

Rosengren finds that “the root cause of the financial crisis was a significant decline in collateral values of residential and commercial real estate” and “exposures across the banking system that are correlated and sizeable.”

Real estate becomes a trigger for a financial crisis because of its high leverage. For banks, these properties are collateral. When property values tank, the collateral is impaired. Defaults rise. Then broader problems spread into the economy. Property owners experience a reduction in income. Homeowners see their paper wealth evaporate and financial stress rises. At some point, banks begin to fail.

This chart shows the number of bank failures, regardless of size. In the decade before the Financial Crisis, the banks had become huge. Thus, fewer but huge banks failed: 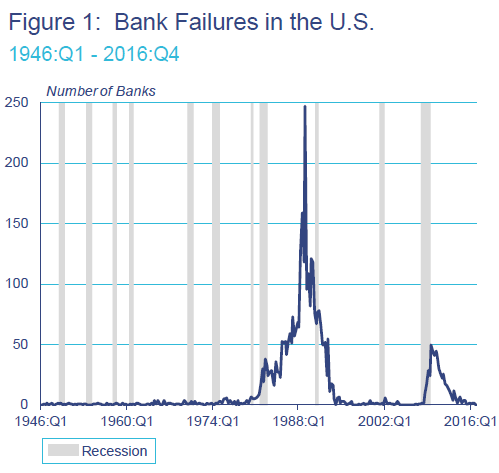 But when these fewer huge banks failed, all heck broke loose. This chart shows the asset values of the failed banks, adjusted for inflation: 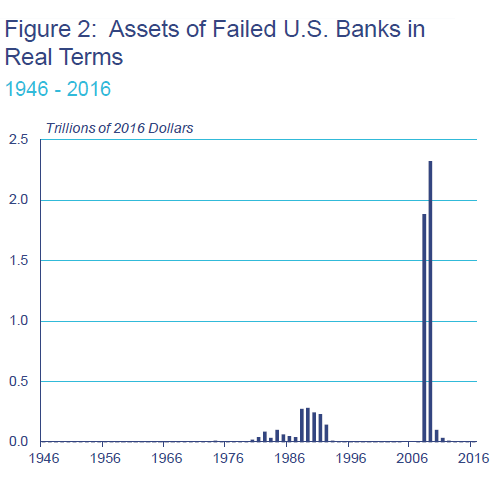 Real estate has a significant financial stability implication because real estate tends to be leveraged by the owners, and those loans represent a significant exposure for financial institutions that are themselves highly leveraged.

As losses from these assets (the loans) hit banks’ capital, the banks shrink their lending, which crushes economic activity and also makes it harder to sell properties as potential buyers cannot find banks willing to lend even at depressed prices. Liquidity in the property market dries up.

And the Magnitude Today?

And CRE lending has continued to surge. For Rosegren, the numbers are worrisome:

This growth has occurred while bank supervisors have been cautioning about the potential risks emanating from the high valuations in some sectors of the real estate market.

But the impact of the guidance from regulators over the past two years about the risks of lending to a sector in a full-blown bubble has been “modest,” he said, as lenders continued to support soaring prices, particularly in the apartment sector.

This chart shows the price increases by sector, adjusted for inflation. Prices of apartment and office buildings have soared above the crazy peak of the prior bubble. Note that retail (light blue line) is starting to strain under the collapse of brick-and-mortar retailers: 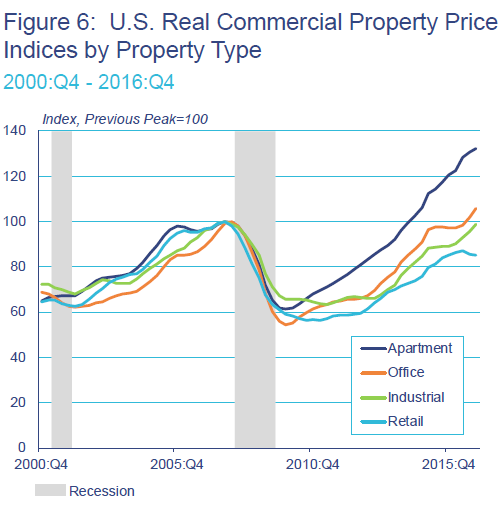 The indices, adjusted for inflation via the GDP deflator, are based on repeat-sales of properties of $2.5 million or more (Source: Real Capital Analytics, BEA, NBER, Haver Analytics).

The problem with apartments is that rental income faces the reality of maxed-out consumers and of a lot of new supply coming on the market. Though rents have soared over the past years, they have not soared nearly enough to keep up with the price increases of apartment buildings. As a consequence, “cap” rates (net operating income divided by the price of the property) have reached the lowest level in 16 years.

So what can be done about it? Raising rates significantly would stop the price increase and reverse the whole thing. But rates won’t rise enough. According to Rosengren, “there is the possibility that equilibrium interest rates may remain relatively low.”

This would require a greater emphasis on macroprudential tools if valuations became a source of concern. However, with limited macroprudential tools available and only a modest price response to date to guidance, it is prudent to keep a healthy, ongoing focus on the sufficiency of these tools and their ongoing enhancement.

In other words, rate increases may not be enough at the “equilibrium interest rate” to deal with this bubble, “guidance” hasn’t really worked so far, and macroprudential tools are too “limited.”

Reading between the lines, it appears the real-estate bubble is once again putting financial stability at risk, but the Fed, which caused this bubble via low rates and QE, is now nudging up interest rates too slowly and too late to an “equilibrium rate” that it knows is too low. And as this bubble runs its course toward a crisis, the Fed will once again pretend it isn’t happening.

Let’s hope that the problems piling up in the used vehicle market — and their impact on new vehicle sales, automakers, $1.1 trillion in auto loans, and auto lenders — is just a blip. Read…  Is this the Sound of the Bottom Falling Out of the Auto Industry?