A MarketWatch article last week by Rex Nutting posited that Amazon could destroy as many as 2 million jobs, which are as many as one study said were lost to China.

While the China estimate strikes me as low, Nutting’s math on Amazon appears reasonable. Basically, more and more people have become habituated to online shopping, even for categories like apparel. I have to confess I’ve done a fair bit of the little clothes shopping I’ve done in the last couple of years on line. On the one hand, I hate dealing with stores because finding anything is so hit or miss, but at least when you find something that looks good in the mirror, it’s usually a keeper. On the other hand, with online shopping, you can find targets more efficiently, but the “hit or miss” element shifts to fit, color, and quality of fabric/tailoring. And if you don’t have time or patience for returns, you wind up with stuff in your closet that eventually goes to a charity.

Here is the guts of Nutting’s argument: 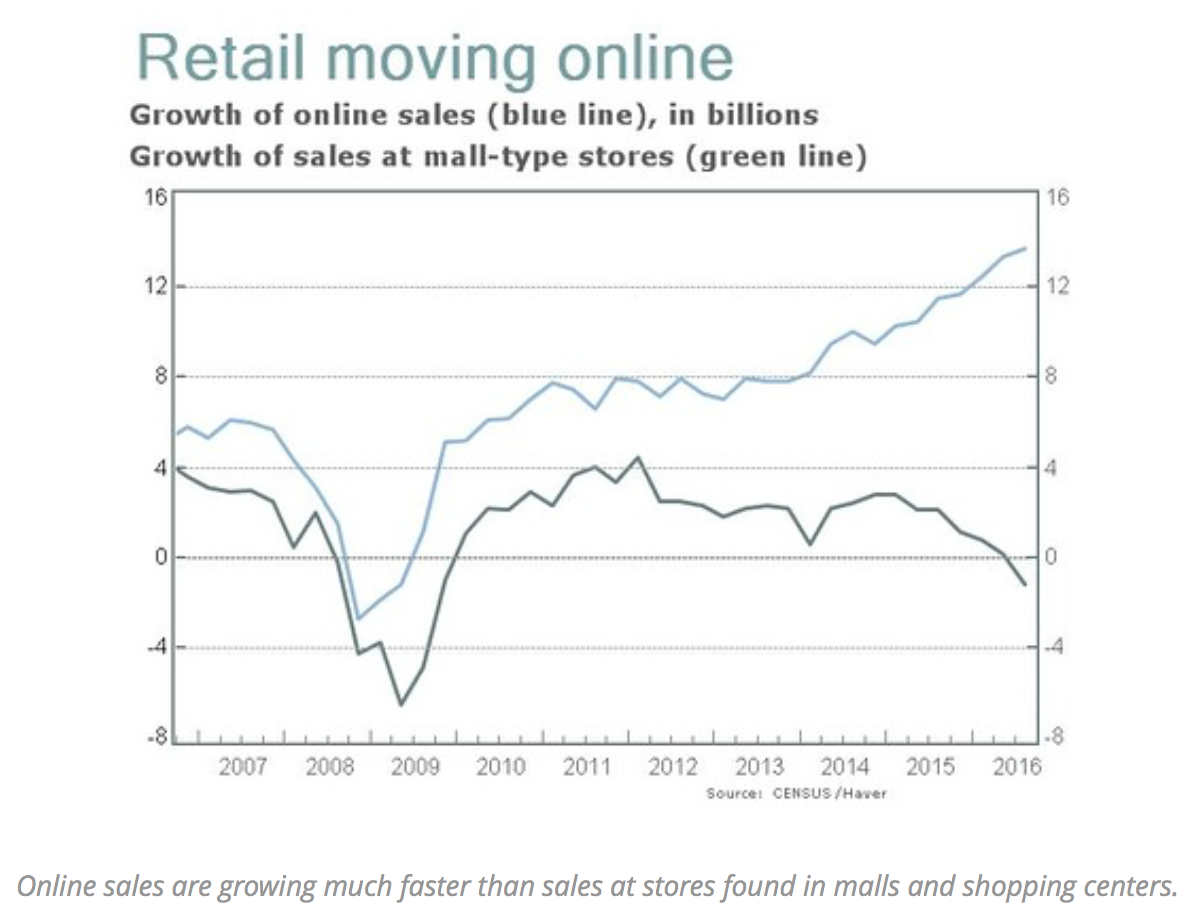 Retailers now employ 16.5 million, and Nutting backs out categories like gas stations that aren’t subject to competition from Amazon. Bear in mind that Amazon is trying to move into groceries, but Nutting deems those jobs to be safe for now. He deems the 12 million workers to be at risk, particularly the ones in stores classified as GAFO, for general merchandise (think everything from sporting goods to hardware and electronics), apparel and accessories, furniture and other sales.

GAFO merchants are still mainly brick and mortar operators, and rely heavily on malls, which is where Amazon is doing the most damage. Mall anchors like Macy’s have been particularly hard hit by competition from Amazon, and once a mall loses an anchor for good, it’s on its way to a death spiral. Nutting again:

There’s not much retailers like Macy’s, The Gap, Best Buy, and Barnes & Noble, can do about it. Their business will be much, much smaller. And now that Amazon is getting serious about groceries, even Wal-Mart is threatened.

Although retailers have been laying off workers, they probably aren’t laying off enough, considering how quickly their sales are eroding. While sales fell 0.6% in 2016, employment at the GAFO stores increased by 1.6%, or about 95,000. You don’t make money by hiring more people to sell less.

So what’s the big deal? Won’t the people who once worked at Macy’s just work at Amazon instead? Well, no. Amazon needs about half as many workers to sell $100 worth of merchandise as Macy’s does…

What’s most troubling to brick-and-mortar retailers and their workers is that Amazon’s sales growth is accelerating (19% in 2014, 20% in 2015 and 28% in 2016), and shows no sign of plateauing. Amazon isn’t just taking sales from brick-and-mortar stores; it’s also taking market share from traditional retailers’ online stores….

Could Amazon actually kill more American jobs than China did? It’s quite likely. Economists David Autor, David Dorn and Gordon Hanson have estimated China’s manufacturing exports to the U.S. may have cost as many as 2 million jobs.

If Amazon can capture 40% of the GAFO market within five years (as seems likely), about 1.5 million jobs at brick-and-mortar stores could be lost. Add in the jobs Amazon will kill at grocery stores, drugstores, warehouses and delivery services, and the total would be well over 2 million.

And unlike the manufacturing jobs lost to China, which were clustered in a comparatively few counties, those retail jobs are located in every city, town and hamlet in America.

It’s a remarkable admission of elite blindness for Nutting to depict manufacturing losses as “concentrated in a comparatively few counties.” Has he ever looked at a map of Rust Belt states? And let us not forget that Obama himself touted Amazon as generating “middle class” jobs, when its warehouse jobs are both physically exhausting yet poorly paid. As we wrote in 2013:

Obama needed a visual to show that, no, really, truly, jobs really are being created somewhere in America for yet another one of his exercises in trying to pretend that he’s on the side of ordinary Americans. But it’s hard finding any really good success stories in an economy with 12.2 million counted as unemployed and over 28 million as “disemployed” which is the number of people out of work relative to normal labor force participation rates when the economy is in good shape. So Obama chose as his backdrop an American success story, Amazon, which is opening a new a warehouse in Chattanooga and hiring 7,000 people….

If you had any doubts that that vision of middle class life was on its way to extinction, the Obama speech made it official. Amazon has been repeatedly cited here and abroad for abusive conditions in its warehouses….

So notice, first, that those 7,000 jobs aren’t in Chattanooga, but all over the US. Second, Amazon’s cash comp is markedly below local averages. And although it offers a “benefits package,” it’s not clear that it’s better than what other area employers offer. The article doesn’t add that some of these 7,000 jobs are part time and/or seasonal.

A quick look at a Chattanooga job site shows the hourly for a comparable job at $9 an hour for someone with a minimum of six months recent experience. That’s just above the living wage for a single person in that city of $8.92….

The message from Obama is clear: Americans are now expected to celebrate when companies are willing to pay at or not much above a living wage. As long as you pay enough that the workers don’t wind up having to seek public assistance in the form of food stamps or emergency rooms for medical care, you’ll now be promoted as creating better conditions for Americans. That’s true as long as you remember that the Americans that benefit from this grinding down of ordinary citizens are Obama’s backers and other members of the elite.

Sadly, the Nutting article indicates that the Amazon-induced hollowing out of America could still have a long way to go.