But don’t blame the oil bust.

Commercial bankruptcy filings, from corporations to sole proprietorships, spiked 28% in March from February, the largest month-to-month move in the data series of the American Bankruptcy Institute going back to 2012. They’re up 8% year-over-year. Over the past 24 months, they soared 37%! At 3,658, they’re at the highest level for any March since 2013.

Bankruptcy filings are highly seasonal, reaching their annual lows in December and January. Then they rise into tax season, peak in March or April, and zigzag lower for the remainder of the year. The data is not seasonally or otherwise adjusted – one of the raw and unvarnished measures of how businesses are faring in the economy.

Note that there is no “plateauing” in this chart: since the low-point in September 2015, commercial bankruptcies have soared 65%! That red spike is the mega-increase in March: 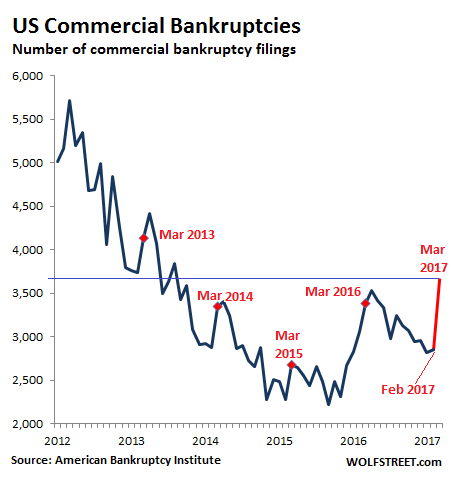 At first, they blamed the oil bust. The price of oil began to collapse in mid-2014. By 2015, worried bankers put their hands on the money spigot, and a number of companies in that sector, along with their suppliers and contractors, threw in the towel and started filing for bankruptcy protection. But now the price of oil has somewhat recovered, banks have reopened the spigot, Wall Street has once again the hots for the sector, new money is gushing into it, and oil & gas bankruptcy filings have abated.

So now they blame brick-and-mortar retail which is in terminal decline, given the shift to online sales. I have reported extensively on the distress of the larger chain stores, but brick-and-mortar retailers include countless smaller operations and stores that no ratings agency follows because they’re too small and can’t issue bonds, and many of them are even more distressed.

This is happening to other businesses too. Piling on debt in good times puts a business on the edge of a cliff, and it doesn’t take much to knock it over the cliff when adverse winds pick up.

Now come the consumers – not all consumers, but those with mounting piles of debt and stagnating or declining real incomes, of which there are many. They’d been hanging on by their teeth, with bankruptcy filings consistently declining since 2010. But that ended in November 2016.

In December, bankruptcy filings rose 4.5% from a year earlier. In January they rose 5.4%. It was the first time consumer bankruptcies rose back-to-back since 2010. I called it “a red flag that’ll be highlighted only afterwards as a turning point.”

In March, consumer bankruptcy filings rose 4% year-over-year, to 77,900, the highest since March 2015, when 79,000 filings occurred, according to the American Bankruptcy Institute data. The turning point has now been confirmed.

Total US bankruptcy filings by consumers and businesses in March spiked 40% from February and rose 4% year-over-year to 81,590, the highest since March 2015: 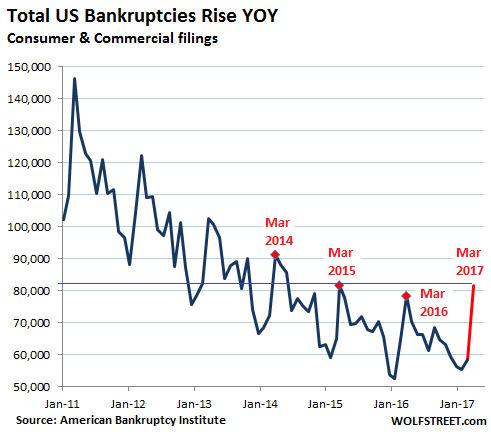 The Fed’s monetary policies have purposefully encouraged businesses and consumers to borrow. But debt doesn’t just go away. It accumulates. By now, an increasing number of businesses and consumers are suffocating under this debt overhang in an economy that never developed the “escape velocity” needed – and hyped by Wall Street for years – to outgrow this debt. Rising bankruptcies are a turning point in the “credit cycle.” They’re not exactly a positive mile-marker for the economy.

The irony is thick: In all major sentiment surveys, economic confidence has soared since November: consumers, owners of small businesses, and corporate executives are riding high on their own ebullience. But the economic reality is tough for businesses and consumers struggling under the hangover from eight years of ultra-low interest rates.