By Uuriintuya Batsaikhan, an Affiliate Fellow Bruegel and who worked at UNDP in Mongolia and the German Institute for Economic Research in Berlin. Originally published at Bruegel

What’s at stake: The oldest human in known history was a Frenchwoman called Jeanne Calment who celebrated her 122nd birthday in 1997. Thanks to advances in technology and medicine humans living until 100, if not 122, might not be an exception in the near future. Ageing, while described as a looming demographic crisis, also offers a silver lining. Business in rapidly ageing societies is already adapting their strategies to navigate the “silver economy”. This blogs review looks at the implications of the silver economy on growth, productivity and innovation as well as the opportunities offered by the silver industry.

Who is the Silver Consumer?

The population above 65 is the fastest growing demographic. This group is also referred to as the “silver generation”, “baby boomers”, the “grand generation” (GG) in Japan and the “grey wall” in China.

Euromonitor forecasts that the global spending power of the silver generation will reach $12 trillion in 2020, which would be 54% larger than the GDP of Latin America. The global average gross income of the silver consumer is around $14,500 annually, compared to the global average of $12,300. There is a large difference between the spending power of 65+ generation in the developed world vs. the developing the world. In addition consumers in developed markets hold more assets and have accumulated more savings.

However, the trend is spreading to the developing world. In BRICS, for instance, the annual average income of the over 65s is $3,500, compared to $14,000 across the developed world, but their income saw almost 30% growth in real terms between 2007 and 2012. The International Standard Organization’s Active Ageing report writes that the US baby boomer generation outspend other generations by $400bn each year. In the next 20 years 70% of US disposable income will be in the hands of those 60 and older. 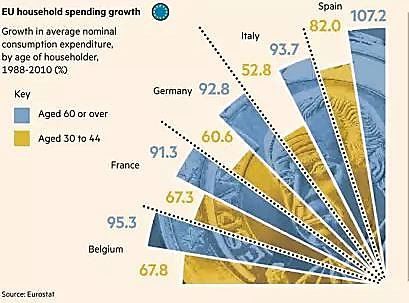 Tapping into the silver market, engaging the over 65s as consumers, offers great opportunities. The Silver Economy in southwest Europe report finds that the market for silver economy is around €450bn in Europe.  In France people aged 50+ hold almost half of the country’s purchasing power and the seniors’ market will provide 45% of total demand. Germany’s silver purchasing power is at €316bn. But Europe will soon no longer be the only “Old Continent”. By 2050, one in four people in Asia, a combined 1.2 billion people will be over 60 years old.

This means that there are great opportunities in the silver economy. Across all markets, according to BNP Paribas Cardif, people over 65 will represent more than 40% of total consumption by 2020. Communication, home and transport sectors will receive the biggest silver boost, while sectors such as e-autonomy, nutrition, health and security will also reap the opportunities offered by the silver economy.

Impact on Growth and Jobs

The silver economy is expected to create a million jobs in Germany until 2030. Schulz and Radvansky write that the silver economy will impact jobs in two ways. One is that the effect of increased demand from the elderly will generate 2.6-4.4 million new jobs across the EU until 2025. The other results from changes in demand in younger households, resulting in approximately 0.5-4.5 million jobs. The change of consumption on employment will either lead to 1.9 million jobs lost in the tough scenario or 3.9 million jobs created in the optimistic scenario. The silver economy has a potential to create jobs especially in the service oriented sectors focusing on wealthy silver consumers in the more advanced countries.

Whereas in countries with comparatively lower incomes the silver goods and services industry will have to meet the needs of the domestic economy and attract foreign interests, for instance through silver tourism, cross-border health and social services. The silver generation themselves can shape the labour market, that is if policies are directed towards considering less rigid rules to retirement, supporting life-long learning and supporting older entrepreneurs.

DIW summarises the common arguments linking ageing to growth and points out that consequently, the shrinking labor supply will decrease potential output, while the decreasing workforce will drag on per capita income. However, in some cases the quality of labour can increase productivity despite the shrinking workforce.

A paper by Aiyar, Ebeke and Shao claims that ageing lowered total factor productivity (TFP) growth by 0.1 percentage point every year in the last two decades in the EU. The future is equally bleak, such that from 2014 to 2045 ageing will intensify in Europe and reduce total factor productivity (TFP) by 0.2 percentage points, even higher in those countries with the fastest ageing populations.

Acemoglu and Restrepo, in what could be a counterintuitive study, find that there is no negative effect of the ageing population on economic growth. They argue that as the population ages, the shrinking workforce will lead to high demand for workforce and therefore higher wages. Higher wages incentivise firms to invest in technology to make labour more productive. This productivity boost will offset the reduction in economic growth. It is possible that a rapid adoption of automation and directed technological change can generate a positive relationship between ageing and economic growth.

There is a large potential for innovation in the silver economy. Opportunities include connected homes that will make mobility easier for the elderly, remote assistance to support autonomy and ensure interaction, and solutions to increase the health and wellbeing of the silver generation. According to Pew Research Center, the baby boomer generation is tech-savvy, contrary to conventional wisdom, and becoming ever more so. Internet use among the over 65s grew by 150% in 2009-2011. 71% of the elderly go online daily and around a third use social media.

According to the Economist, Japan is actively innovating for its “grand generation” since it had a comparatively earlier start. These innovations span from robotic exoskeleton suits to help with mobility to the use of robots in nursing care. Fujitsi has sold 20 million phones with larger buttons and simplified functions, which are coming to Europe.

Toyota is increasingly equipping its cars with lasers, cameras and sensors. Kohlbacher advises that in terms of the marketing strategy for the silver generation, instead of creating products only for the elderly, it is often better to create products that bridge generations. The European Commission writes that the introduction of ICT in telemedicine is estimated to improve the efficiency of health and care by 20%.

Turning the Silver Tsunami into a Silver Lining

Nesta warns that our social institutions, such as social care and labour market, are archaic and inflexible in the face of dramatic advances in medicine and science. Therefore, social institutions needs to be rebuilt taking into account today’s lifespan and changing demands. Instead of focusing on top-down issues such as pension and care, policy needs to focus on the older generation as productive and innovative members of society. The OECD busts three myths around the policy dialogue on the ageing worker: