By Jessica Goodhart. Originally published at Capital and Main

Barely 18 and fresh out of high school, George Estrada was lucky to land a job as a solar installer. He needed work, and the pay — $15 per hour — was not bad for a teenage dad willing to work hard.

The year was 2012. SolarCity – the company cofounded by Elon Musk’s cousin Lyndon Rive, had just gone public after gobbling up smaller installers across the country. While SolarCity has been an incredible job engine, for some workers the pace of growth has come at a cost. In lawsuits and interviews, workers allege being denied overtime, meal and bathroom breaks, minimum wages, and complain about managers’ inattention to quality and safety.

“At first it was good,” Estrada remembers. But four years later, after SolarCity had exploded in size, from 2,500 employees to more than 15,000, Estrada quit, disillusioned by what he says was the company’s focus on meeting sales goals over workmanship and the well-being of its employees.

Estrada had taken a ride on what some call the “solarcoaster,” joining an industry that has provided jobs and opportunity to tens of thousands of workers across the country, even as it has recently faced mass layoffs and employee lawsuits — raising concerns about how fairly workers in a fast-growing, Wall Street-fueled industry are being treated.

No company is more emblematic of the residential solar industry’s rollicking ride than SolarCity, with its recognizable fleet of green and white trucks, vast army of salespeople and installers, and its headline-grabbing chairman, Elon Musk, whose electric car company Tesla acquired SolarCity last November, several months before reporting in securities filings that the solar company had shed 3,000 jobs in 2016. 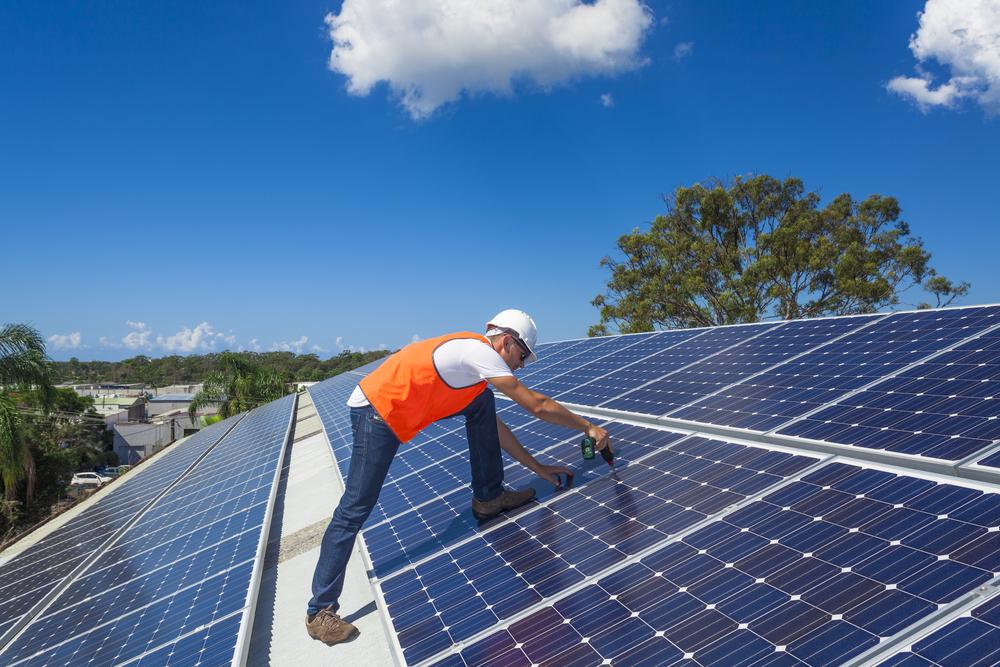 SolarCity, which is based in San Mateo, built its name on a zero-down financing model that leveraged investor dollars and federal tax credits to finance a rapid expansion that has yet to produce positive returns. Its big vision captured the imagination of environmentalists like Bill McKibben, who wrote a 2015 New Yorker article that quoted chief executive officer Rive proclaiming that his goal was to get solar on a rooftop “every three seconds.” The climate crisis seemed to demand that kind of vision and scale of operation.

The industry also includes smaller regional firms such as Sullivan Solar Power in San Diego, where Estrada went to work after leaving SolarCity. Started in 2004, Sullivan Solar Power built its customer base slowly and aimed at creating a highly trained and well-compensated workforce. Estrada would find a different pace of work there, one that he says has allowed him to focus more care on each customer and to build a future as a skilled electrician, able to find work in any industry.

At SolarCity, crews are provided with “panel pay,” a bonus system that incentivizes speed by paying installers for every panel they install if that rate is higher than their hourly wage. According to Estrada, the rapid pace led to leaky roofs when holes drilled to secure the panels weren’t properly sealed, requiring return visits after customers complained.

It is impossible to know whether the company’s incentive system led to sloppy workmanship, but complaints of roof leaks following SolarCity installations do appear on the Better Business Bureau’s website. Homes outfitted with solar are required to pass muster with city building inspectors.

Estrada claims he was asked by supervisors to accept bonuses in exchange for not reporting overtime. Because of the pace of work, he was unable to get time off to be with his family, he says. In 2016, he quit, before the company began laying off workers.

Some workers I interviewed spoke highly of the company, crediting SolarCity with providing ample training and promotion opportunities, generous benefits, as well as a chance to be part of an innovative company on the forefront of the move toward clean energy. One former installer, a graduate of Homeboy Industries’ training program, described SolarCity as “the best job I ever had” and is now earning $55,000 a year as an inspector for the company. Kevin Midei, who worked as an installer in Maryland in 2015, and who now runs his own business, says SolarCity is “cool” and “forward-looking,” and, he says, in reference to the 2016 layoffs, “like any other young industry,” it faces ups and downs.

George Estrada, however, is hardly alone in criticizing SolarCity’s employment practices. Ravi Whitworth, another installer, and four other plaintiffs, are seeking class action status in an amended complaint filed in March in U.S. District Court in San Francisco, claiming that the company denied them overtime, minimum wages, meal and rest breaks.

The company did not provide its workers access to bathrooms during worktime, requiring them to urinate in bottles or buckets while on the job, according to the lawsuit. The plaintiffs — installers from various parts of California — claim to represent 2,000 workers at the company.

One of the lawsuit’s allegations – that SolarCity failed to compensate installers for travel between jobs — was repeated in another lawsuit by former SolarCity crew leader John Zazueta, filed in Los Angeles County Superior Court in 2016.

Zazueta also alleges he was fired by SolarCity after he  refused to perform electrical work under conditions he deemed unsafe. His charge echoes Estrada’s claim that, when he worked out of the San Diego warehouse, certified electricians “would get fired if they asked too many questions.”

Some of the lawsuit allegations are also echoed by “Jake,” a Southern California field inspection coordinator for SolarCity who requested that his real name not be used in this article. He confirmed that installers clock out between jobs and also said the company was not always forthcoming with promised wages.

“There’s the thing where they promise if you get it done in a certain amount of time, you get this bonus pay, but it never happens,” he said. Jake has spent about four years in the industry, with a year and a half of that at SolarCity, and earns $16 per hour. He too hopes to become an electrician.

SolarCity is not the only firm to face adversity recently. Even though business is strong for many installers, the residential solar industry’s other large national firms, including Vivint and Sungevity, have also had a difficult year, according to Energywire. A chaotic layoff at Sungevity, which declared insolvency in March, prompted the filing of a lawsuit by workers alleging the company violated laws requiring advance notice of mass layoffs.

Nicholas De Blouw, an employment attorney, works at a firm that has brought lawsuits seeking class action status for employees at the big solar companies, including Verengo, Sunrun, Vivint and SolarCity. These companies’ focus on meeting corporate targets has caused them to run afoul of California labor law, he says.

“It’s a classic example of these big corporations caring about one thing – especially if they are filing IPOs [initial public offerings] on the stock exchange – they care about the shareholder’s bottom line.” Employees in the field “are the ones that get the squeeze,” says De Blouw.

Sitting in the backyard of an Escondido customer’s home, Estrada is happy, having finished a day’s work installing panels for Sullivan Solar Power, where he went to work in 2016 after leaving SolarCity.

Estrada is in a five-year electrical apprenticeship program—with a steady wage progression—that gives him access to full health, dental and vision benefits while he earns $17.25 per hour. It took him four months to quality for the program, a process that included tests and interviews, and that puts him on a path to be an electrician, where he will be able to earn more than $90,000 per year.

“You’re talking about a way different story,” says Estrada who, at 23, has a second child on the way. “Here we take our time,” he adds. “We replace every tile. We double-test everything.” Like every apprentice in the firm, he always works under the supervision of a journeyman electrician.

Sullivan Solar Power doesn’t have the reach of SolarCity. Since its inception in 2004, the company has served more than 6,000 homes in San Diego, Riverside and Orange counties, to SolarCity’s 300,000 in more than 20 states. Still, it is a major player in San Diego, voted by San Diego Union Tribune readers as the best solar company in the area and listed by Inc. Magazine as one of the 5,000 fastest-growing private companies in the country seven years in a row. It has about 150 employees and revenues of $50 million a year, according to its founder, Daniel Sullivan.

Sullivan brings to the job his background as an electrician and hires workers through International Brotherhood of Electrical Workers hiring halls. He acknowledges that using union labor costs more, but says that what he spends on the front end he saves by only having to do the job once. Homeowners “are installing a generating system on the roof of their most valuable asset,” he points out. The company has no customer complaints on the Better Business Bureau website.

The company also has a different approach to growth than SolarCity. Whereas SolarCity, a public company, has relied on Wall Street investors to finance its rapid expansion, Sullivan Solar Power has reinvested its profits.

Of course, the vast majority of residential solar companies do not hire union labor through hiring halls. But Sullivan Solar Power’s employment practices are the norm for firms that are building the giant, utility-scale solar arrays in the desert, according to Carol Zabin, co-chair of the University of California, Berkeley’s Donald Vial Center on Employment in the Green Economy. The benefits of union jobs in the solar industry go far beyond higher wages, says Zabin.

“The state-approved apprenticeship programs used by union firms give workers a set of skills and capabilities that can be used broadly, not only in solar, but in all kinds of other kinds of construction projects, giving workers a real career, not just a job as a solar installer, making them much more employable,” Zabin says.

The entire solar industry is becoming more serious about training and there are good jobs to be had at union and non-union firms alike, according to Brano Goluža, an associate professor at L.A. Trade Technical College, who has run a renewable training program for the past 10 years. Whereas five years ago, “companies were looking for bodies,” Goluža says, now they are requiring board certifications and are also looking for licensed electricians and other tradespeople.

A new and fast-growing industry, solar is like a “teenager” going through the expected “growing pains,” according to Goluža.

In spite of President Trump’s pro-fossil-fuel agenda, the demand for clean energy alternatives is not going away, Goluža adds. Growth has slowed in the rooftop solar industry in the past year, but many see the evolution of battery storage technology and vehicle electrification as promising for the long-term health of the residential solar industry.

And industry leaders have been cautiously optimistic that Republicans will leave be the federal Solar Investment Tax Credit (ITC), a major policy driver of rooftop solar, in spite of Trump’s efforts to roll back the Clean Power Plan.

“There is support for solar on both sides of the aisle,” according to Bernadette Del Chiaro, executive director of the California Solar Energy Industries Association. She said that the extension of the tax credit, which will ramp down over time, was “developed and passed by the same folks who remain in control of Congress.”

As long as there are more homes going solar, that’s good news for George Estrada who, after a long day on a rooftop, says he loves his work.

“You do something different every day. You’re out in the sun,” Estrada says. “Nothing’s better than this.”