We are witnessing the demise of the world’s two largest economic power blocks, the US and EU. Given deteriorating economic conditions on both sides of the Atlantic, which have been playing out for many years but were so far largely kept hidden from view by unprecedented issuance of debt, the demise should come as no surprise.

The debt levels are not just unprecedented, they would until recently have been unimaginable. When the conditions for today’s debt orgasm were first created in the second half of the 20th century, people had yet to wrap their minds around the opportunities and possibilities that were coming on offer. Once they did, they ran with it like so many lemmings.

The reason why economies are now faltering invites an interesting discussion. Energy availability certainly plays a role, or rather the energy cost of energy, but we might want to reserve a relatively larger role for the idea, and the subsequent practice, of trying to run entire societies on debt (instead of labor and resources). 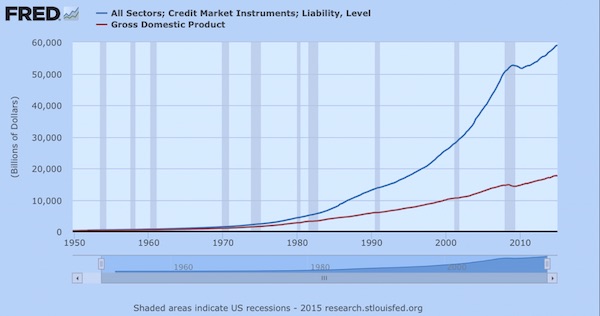 It almost looks as if the cost of energy, or of anything at all really, doesn’t play a role anymore, if and when you can borrow basically any sum of money at ultra low rates. Sometimes you wonder why people didn’t think of that before; how rich could former generations have been, or at least felt?

The reason why is that there was no need for it; things were already getting better all the time, albeit for a briefer period of time than most assume, and there was less ‘want’. Not that people wouldn’t have wanted as much as we do today, they just didn’t know yet what it was they should want. The things to want were as unimaginable as the debt that could have bought them.

It’s when things ceased getting better that ideas started being floated to create the illusion that they still were, and until recently very few people were not fooled by this. While this will seem incredible in hindsight, it still is not that hard to explain. Because when things happen over a period of decades, step by step, you walk headfirst into the boiling frog analogy: slowly but surely.

At first, women needed to start working to pay the bills, health care and education costs started rising, taxes began to rise. But everyone was too busy enjoying the nice slowly warming water to notice. A shiny car -or two, three-, a home in the burbs with a white picket fence, the American -and German and British etc.- Dream seemed to continue.

Nobody bothered to think about the price to pay, because it was far enough away: the frog could pay in installments. In the beginning only for housing, later also for cars, credit card debt and then just about anything.

Nobody bothered to look at external costs either. Damage to one’s own living environment through a huge increase in the number of roads and cars and the demise of town- and city cores, of mom and pop stores, of forest land and meadows, basically anything green, it was all perceived as inevitable and somehow ‘natural’ (yes, that is ironic). 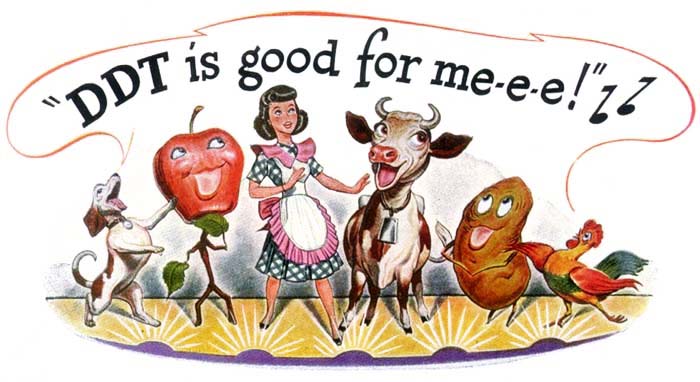 Damage to the world beyond one’s own town, for instance through the exploitation of domestic natural resources and the wars fought abroad for access to other nations’ resources, only a very precious few ever cared to ponder these things, certainly after the Vietnam war was no longer broadcast and government control of -or cooperation with- the media grew exponentially.

That leads us into another discussion. If not for the constraints, whether they emanate from energy and/or finance, would growth have been able to continue at prior levels? Both the energy and the finance/political camps mostly seem to think so.

The finance crowd mostly seems to think that if we would have followed different economic models, growth would have been for the taking. They tend to blame the Fed, or politics, loose regulation, the banking system.

Are either of them right? If they are, that would mean growth can continue de facto indefinitely if only we were smart enough to either make the right economic and political decisions, or to find or invent new sources of energy.

But what kind of growth do both ‘fields’ envision? Growth to what end, and growth into what? 4 years ago, I wrote What Do We Want To Grow Into? I have still never seen anyone else ask that question, before or since, let alone answer it.

We want growth by default, we want growth for growth’s sake, without caring much where it will lead us. Maybe we think unconsciously that as long as we can secure growth, we can figure out what to do with it later.

But it doesn’t work that way: growth changes the entire playing field on a constant basis, and we can’t keep up with the changes it brings, we’re always behind because we don’t care to answer that question: what do we want to grow into. Growth leads us, we don’t lead it. Next question then: if growth stops, what will lead us?

Because we don’t know where we want growth to lead us, we can’t define it. The growth we chase is therefore per definition blind. Which of necessity means that growth is about quantity, not quality. And that in turn means that the -presupposed- link between growth and progress falls apart: we can’t know if -the next batch of- growth will make us better off, or make our lives easier, more fulfilling. It could do the exact opposite.

And that’s not the only consequence of our blind growth chase. We have become so obsessed with growth that we have turned to creative accounting, in myriad ways, to produce the illusion of growth where there is none. We have trained ourselves and each other to such an extent to desire growth that we’re all, individually and collectively, scared to death of the moment when there might not be any. Blind fear brought on by a blind desire.

As we’ve also seen, we’ve been plunging ourselves into ever higher debt levels to create the illusion of growth. Now, money (debt) is created not by governments, as many people still think, but by -private- banks. Banks therefore need people to borrow. What people borrow most money for is housing. When they sign up for a mortgage, the bank creates a large amount of money out of nothing.

So if the bank gets itself into trouble, for instance because they lose money speculating, or because people can’t pay their mortgages anymore that they never could afford in the first place, the only way out for that bank, other than bailouts, is to sign more people up for mortgages -or car loans-, preferably bigger ones all the time. 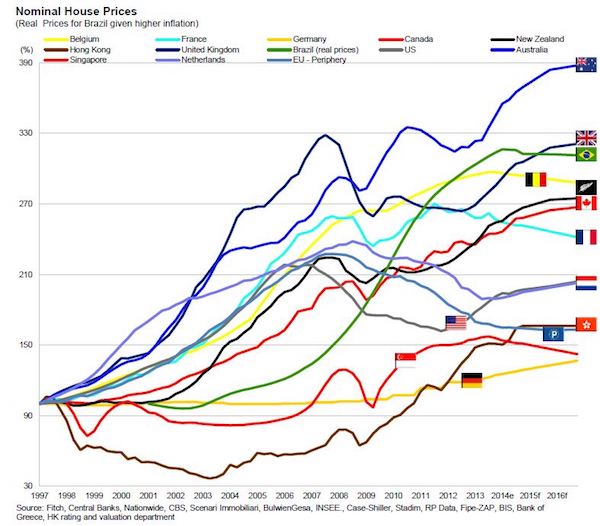 What we have invented to keep big banks afloat for a while longer is ultra low interest rates, NIRP, ZIRP etc. They create the illusion of not only growth, but also of wealth. They make people think a home they couldn’t have dreamt of buying not long ago now fits in their ‘budget’. That is how we get them to sign up for ever bigger mortgages. And those in turn keep our banks from falling over.

Record low interest rates have become the only way that private banks can create new money, and stay alive (because at higher rates hardly anybody can afford a mortgage). It’s of course not just the banks that are kept alive, it’s the entire economy. Without the ZIRP rates, the mortgages they lure people into, and the housing bubbles this creates, the amount of money circulating in our economies would shrink so much and so fast the whole shebang would fall to bits.

That’s right: the survival of our economies today depends one on one on the existence of housing bubbles. No bubble means no money creation means no functioning economy.

What we should do in the short term is lower private debt levels (drastically, jubilee style), and temporarily raise public debt to encourage economic activity, aim for more and better jobs. But we’re doing the exact opposite: austerity measures are geared towards lowering public debt, while they cut the consumer spending power that makes up 60-70% of our economies. Meanwhile, housing bubbles raise private debt through the -grossly overpriced- roof.

This is today’s general economic dynamic. It’s exclusively controlled by the price of debt. However, as low interest rates make the price of debt look very low, the real price (there always is one, it’s just like thermodynamics) is paid beyond interest rates, beyond the financial markets even, it’s paid on Main Street, in the real economy. Where the quality of jobs, if not the quantity, has fallen dramatically, and people can only survive by descending ever deeper into ever more debt. 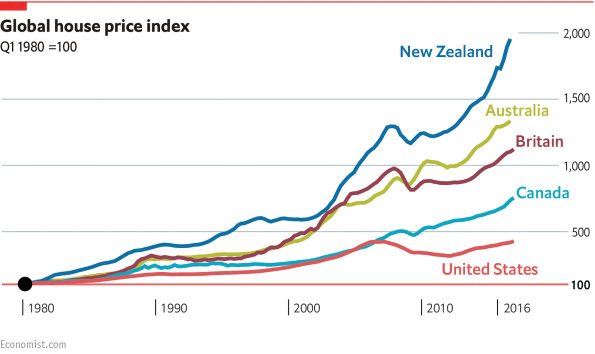 Do we need growth? Is that even a question we can answer if we don’t know what we would need or use it for? Is there perhaps a point, both from an energy and from a financial point of view, where growth simply levels off no matter what we do, in the same way that our physical bodies stop growing at 6 feet or so? And that after that the demand for economic growth must necessarily lead to The Only Thing That Grows Is Debt?

It’s perhaps ironic that the US doesn’t appear to be either first or most at risk this time around. There are plenty other housing markets today with what at least look to be much bigger bubbles, from London to China and from Sydney to Stockholm. Auckland’s bubble already looks to be popping. The potential consequences of such -inevitable- developments are difficult to overestimate. Because, as I said, the various banking systems and indeed entire economies depend on these bubbles.

The aftermath will be chaotic and it’s little use to try and predict it too finely, but it’ll be ‘interesting’ to see what happens to the banks in all these countries where bubbles have been engineered, once prices start dropping. It’s not a healthy thing for an economy to depend on blowing bubbles. It’s also not healthy to depend on private banks for the creation of a society’s money. It’s unhealthy, unnecessary and unethical. We’re about to see why.