Yves here. This sort of orthodoxy-reinforing narrative is deeply frustrating, particularly since the research side of the IMF, unlike the program side, often does very good work.

One of the big problem of reports like this is they never consider the question that income distribution is a function of political and social arrangements, and in particular, the rights of capital versus labor. It is hardly an accident that labor stopped sharing in the benefits of productivity gains in the mid 1970s, well before globalization and technology would have played much of a role. The big culprit was loss of labor bargaining power, which become official policy due to Volcker committing the Fed to creating more labor slack to keep inflation as close to his preferred target of zero as possible, and the Reagan/Thatcher “free market” fetish.

Now in fairness, some of the problems with a report like this are the difficulty of unpacking critical issues. For instance, as we’ve discussed regularly, the amount of offshoring of jobs that took place was considerably more than was justified by profit concerns. Direct factory labor is a small percentage of wholesale product cost; savings there are offset by greater managerial, finance, and transport costs, plus higher risks. In others words, offshoring and outsourcing are often, if not mainly, a transfer from low level workers to management rather than a bona-fide plus to the business. So while it is narrowly correct to say that globalization has been a big driver of middle class losses, analyses like that are misleading because they focus on proximate causes, not ultimate causes.

This report also misses another increasingly recognized driver of inequality, which is the lack of anti-trust enforcement which in turns leads to monopoly and oligopoly rent extraction. And it ignores a huge transfer from ordinary citizens to the capital-owning classes via subsidies. The banking industry is a huge example, where as we’ve written repeatedly, its operations are purely extractive (the cost of periodic crises greatly exceeds the value of the enterprises) and it enjoys such large subsidies that it should not be regarded as private enterprise. Banks should be regulated as utilities.

Similarly, an op ed in Links today describes the magnitude of subsidies extracted by WalMart: roughly $50 per American household per year. That is equivalent to 1/4 of its 2014 pre-tax profits, and an even higher percentage of its US pretax profits.

From the IMF Direct blog comes an interesting analysis of the declining share of income going to workers, which is being driven by automation and globalisation:

After being largely stable in many countries for decades, the share of national income paid to workers has been falling since the 1980s. Chapter 3 of the April 2017 World Economic Outlook finds that this trend is driven by rapid progress in technology and global integration.

Labor’s share of income declines when wages grow more slowly than productivity, or the amount of output per hour of work. The result is that a growing fraction of productivity gains has been going to capital. And since capital tends to be concentrated in the upper ends of the income distribution, falling labor income shares are likely to raise income inequality… 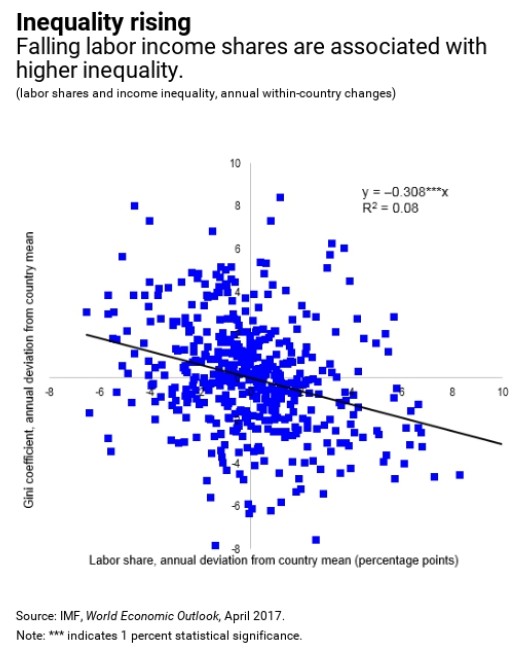 In advanced economies, labor income shares began trending down in the 1980s. They reached their lowest level of the past half century just prior to the global financial crisis of 2008, and have not recovered materially since. Labor income shares now are almost 4 percentage points lower than they were in 1970…

Indeed, as growth remains subpar in many countries, an increasing recognition that the gains from growth have not been broadly shared has strengthened a backlash against economic integration and bolstered support in favor of inward-looking policies. This is especially the case in several advanced economies…

In advanced economies, about half of the decline in labor shares can be traced to the impact of technology. The decline was driven by a combination of rapid progress in information and telecommunication technology, and a high share of occupations that could be easily be automated. 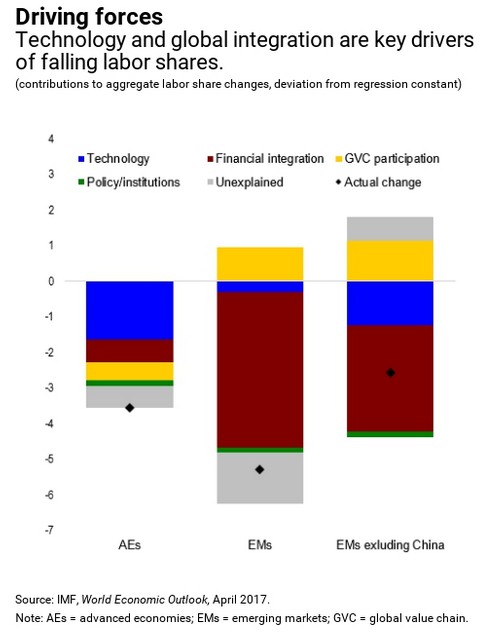 Global integration—as captured by trends in final goods trade, participation in global value chains, and foreign direct investment—also played a role. Its contribution is estimated at about half that of technology. Because participation in global value chains typically implies offshoring of labor-intensive tasks, the effect of integration is to lower labor shares in tradable sectors… Taken together, technology and global integration explain close to 75 percent of the decline in labor shares in Germany and Italy, and close to 50 percent in the United States…

Another key finding of our research is that the decline in labor shares in advanced economies has been particularly sharp for middle-skilled labor. Routine-biased technology has taken over many of the tasks performed by these workers, contributing to job polarization toward high-skilled and low-skilled occupations.

This “hollowing-out” phenomenon has been reinforced by global integration, as firms in advanced economies increasingly have access to a global labor supply through cross-border value chains…

Sadly, Australian workers has fared badly against their Advanced Nation counterparts. As shown recently by Greg Jericho, Australia’s decline in wages’ share of GDP has been particularly steep: 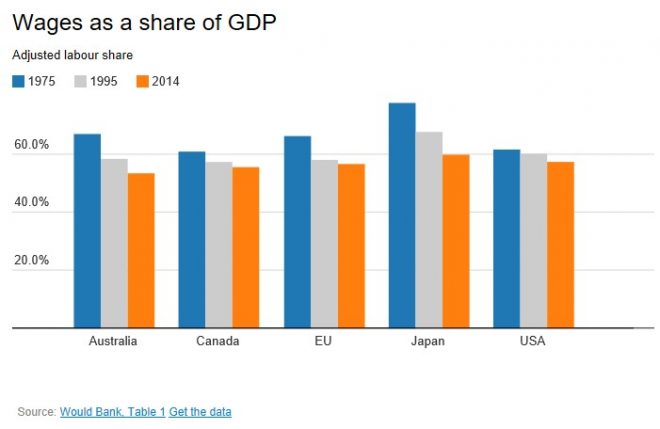 The below charts, which come from the ABS National Accounts, illustrates the decline in Australian workers’ shares.

First, the growth in average employee earnings is the lowest on record: 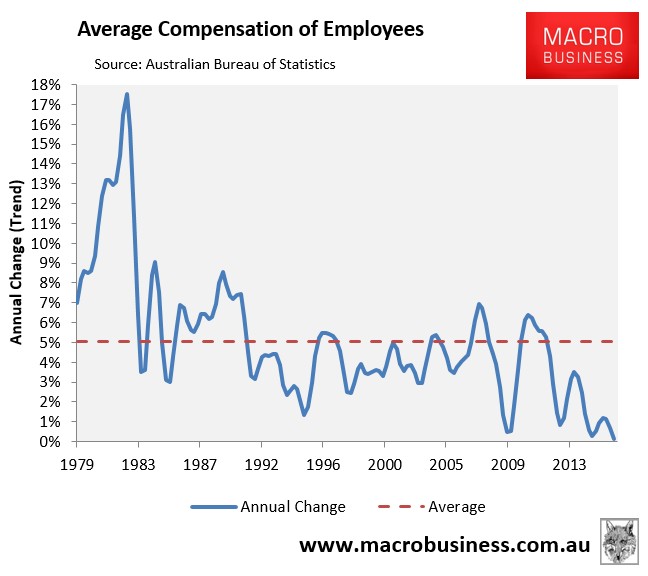 And has failed dismally to keep pace with growing labour productivity: 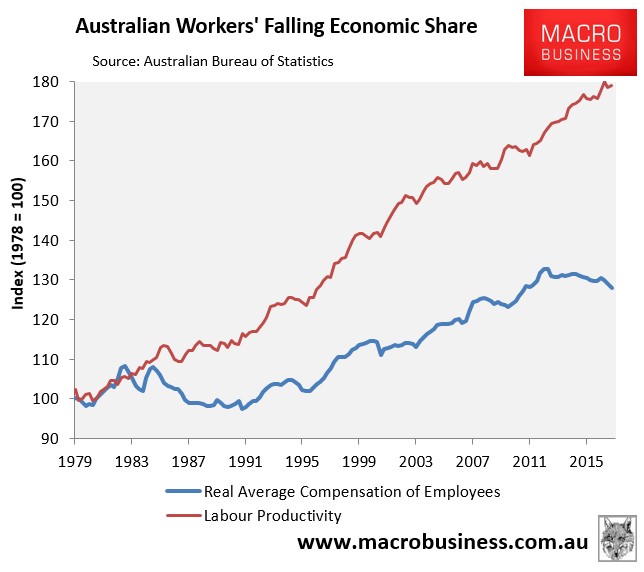 Meanwhile, the share of total factor income going to workers (as opposed to business owners) has been falling for decades: 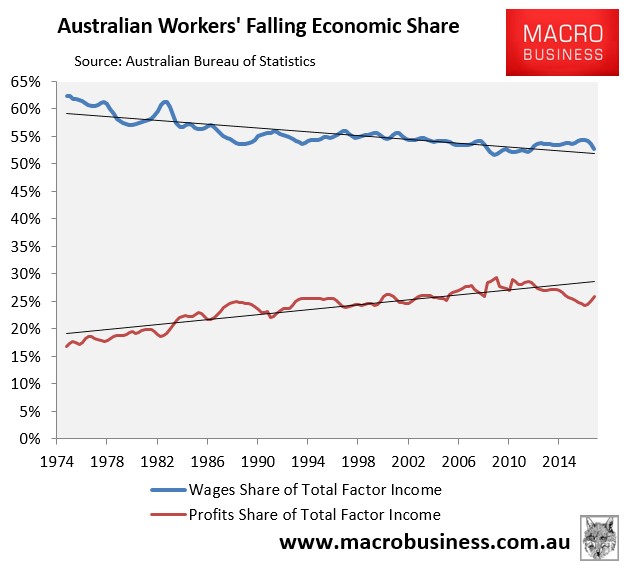 While the elites continue to sell us the economic virtues of globalisation and mass immigration, the gains are flowing primarily to the wealthy owners of land and capital, who get to privatisation the gains and socialise the losses.

These factors, above all others, help to explain the rise of fringe political movements like Brexit, Donald Trump, and One Nation at home. It’s a class war.