Yves here. Perhaps this is just a coincidence, but this is the second story in a month where Kansas is breaking with convention to help its economy. The first, as readers may recall, was the state legislature bucking the Koch brothers in voting for Medicaid expansion. This is a clever approach to help important, established local businesses operating when their owners want to retire.

One reason for running this post is in case any readers have university or business school connections and think their school might consider this idea.  RedTire has been in operation long enough that it should have most of the bugs worked out.

In Kansas, a new matchmaking service is helping transition small businesses to new hands. Could it be a model for the rest of rural America?

When asked what makes a place worth staying in, most people don’t immediately think of a pharmacy. But if there’s nowhere nearby to get a prescription filled, inconvenience can lead to relocation. In a state like Kansas, where nearly a third of the population is rural, a local establishment like a pharmacy or dentist’s office can be a stronghold of community life.

Take the city of Concordia, Kansas, with a population just over 5,000. Doug Funk set up shop here after finishing pharmacy school at the University of Kansas. “I always wanted to do something where you could be your own boss,” he says. In 1985, after working for several years in a hospital pharmacy and in other jobs, he bought Funk Pharmacy and brought his life to Concordia.

For 30 years, business was good, and the pharmacy employed as many as 12 people at a time. He had “really, really loyal customers,” Funk recalls, “your average, everyday Joes.” Over the years, Funk became a well-known and respected pharmacist.

Eventually, when he was getting into his 50s, Funk started to consider retirement. He spoke to a few folks he thought could take over the business, but none of them offered a fair deal.

“They basically wanted to steal it from me,” says Funk. “They wanted to pay a lot less than what it was worth.”

Funk would have had a hard time trying to use a traditional business broker—a professional specialized in the buying and selling of companies. Firms in small towns are less attractive to brokers, who typically only work in more densely populated areas, and for a high price.

Thankfully, Funk had heard of a program for people in his situation, and turned to them for help. The program, called RedTire, was similar to a business broker, but it was free of charge and happy to make deals in rural areas.

RedTire has nothing to do with tires; instead, the name is short for the phrase “Redefine Your Retirement.” The staff do everything from appraising the business to vetting the buyer, and even offer counsel after the deal is done. While traditional business brokers work to maximize the advantage of the party that hired them, RedTire focuses on making the fairest deal possible for both sides. As of December, it has brokered the sale of 27 businesses, which together employ more than 200 people, in sales that total $22.6 million. The program has grown steadily in the five years since it launched, and now gets more work requests than it has the capacity to take on.

Some of the businesses RedTire transitions would probably have disappeared if the service wasn’t there. Steve Kelly, the vice president of economic development at the Chamber of Commerce in Lawrence, Kansas, says that he’s seen many small businesses close when the owner couldn’t find a new person to take over. “Not only do you have a business owner that’s in a bad spot, you potentially put the whole community in a position of loss,” he said. 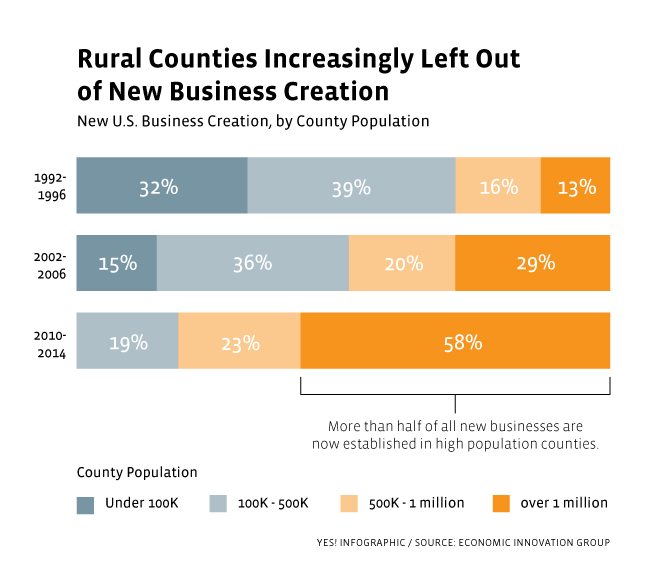 And when small towns lose businesses, people leave with them, explains Wayne Bell, the district director of the Wichita, Kansas, branch of the federal government’s Small Business Administration. “It is vital to the life of a small town to have those businesses that may have been there for some time. It’s important that they’re able to hand off the business to another owner that’s interested in retaining the services right there in the town.”

And that’s exactly what happened for Doug Funk, when an acquaintance named Robb Rosenbaum expressed interest in buying his pharmacy. RedTire made sure the deal went smoothly.

In 2015, the Rosenbaums made the move from Kansas City, Missouri, to Concordia to take on Funk Pharmacy. Robb was a bit nervous to relocate his two small children to such a tiny city. “But that has been excellent, actually,” he says. “They have done better than ever could have been expected, both of them.”

Robb now owns the pharmacy jointly with his wife, Meredith. Because Funk was running a tight ship, Rosenbaum says it’s been an easy transition. Besides filling prescriptions for individuals, the pharmacy also serves hospice patients and even the county jail.

“Out in a rural community like [Concordia], we kind of do a little bit of everything,” says Robb.

In addition to their work at the pharmacy, both Rosenbaums serve on local boards: Robb at a local foundation and Meredith at the Concordia Chamber of Commerce.

Both Funk and Rosenbaum are alumni of the University of Kansas, which hosts RedTire. The university is key to the program’s success, and students benefit from every part of it. Business students help staff the program and get a paid learning opportunity, while alumni get free help with the buying and selling of their firms.

After five years in business, the folks at RedTire are looking into how to share their model with other institutions.

There’s been plenty of interest in emulating the idea, says Denton Zeeman, program manager. But when it becomes clear that RedTire doesn’t charge its clients, many institutions tend to abandon their plans to replicate the project. “There has to be some social corporate responsibility, and therefore support from the university,” Zeeman says. He is confident that, with some personal support from RedTire, other universities could get something similar up and running.

“This need exists probably in every country, and I do believe it exists in every state in the U.S.,” says Zeeman.