Yves here. The article makes a comment in passing that bears teasing out. The inflation that started in the later 1960s was substantially if not entirely the result of Lyndon Johnson refusing to raise taxes because it would be perceived to be to pay for the unpopular Vietnam War. Richard Nixon followed that approach.

Scholars and policymakers interested in the reform of the international financial system have always looked back to the Bretton Woods system as an example of a man-made system that brought both exemplary and stable economic performance to the world in the 1950s and 1960s. Yet Bretton Woods was short-lived, undone by both flaws in its basic structure and the unwillingness of key sovereign members to follow its rules. Many commentators hark back to the lessons of Bretton Woods as an example to possibly restore greater order and stability to the present international monetary system. In a recent paper, I revisit these issues from over a half century ago (Bordo 2017).

The Bretton Woods system was created by the 1944 Articles of Agreement at a global conference organised by the US Treasury at the Mount Washington Hotel in Bretton Woods, New Hampshire, at the height of WWII. It was established to design a new international monetary order for the post war, and to avoid the perceived problems of the interwar period: protectionism, beggar-thy-neighbour devaluations, hot money flows, and unstable exchange rates. It also sought to provide a framework of monetary and financial stability to foster global economic growth and the growth of international trade.

The system was a compromise between the fixed exchange rates of the gold standard, seen as conducive to rebuilding the network of global trade and finance, and the greater flexibility to which countries had resorted in the 1930s to restore and maintain domestic economic and financial stability. The Articles represented a compromise between the American plan of Harry Dexter White and the British plan of John Maynard Keynes. The compromise created an adjustable peg system based on the US dollar convertible into gold at $35 per ounce along with capital controls. The compromise gave members both exchange rate stability and the independence for their monetary authorities to maintain full employment. The IMF, based on the principle of a credit union, whereby members could withdraw more than their original gold quotas, was established to provide relief for temporary current account shortfalls.

It took close to 15 years to get the Bretton Woods system fully operating. As it evolved into a gold dollar standard, the three big problems of the interwar gold exchange standard re-emerged: adjustment, confidence, and liquidity problems.

The adjustment problem in Bretton Woods reflected downward rigidity in wages and prices which prevented the normal price adjustment of the gold standard price specie flow mechanism to operate. Consequently, payment deficits would be associated with rising unemployment and recessions. This was the problem faced by the UK, which alternated between expansionary monetary and fiscal policy, and then in the face of a currency crisis, austerity – a policy referred to as ‘stop-go’. For countries in surplus, inflationary pressure would ensure, which they would try to block by sterilisation and capital controls.

A second aspect of the adjustment problem was asymmetric adjustment between the US and the rest of the world. In the pegged exchange rate system, the US served as central reserve country and did not have to adjust to its balance of payments deficit. It was the n-1th currency in the system of n currencies (Mundell 1969). This asymmetry of adjustment was resented by the Europeans. 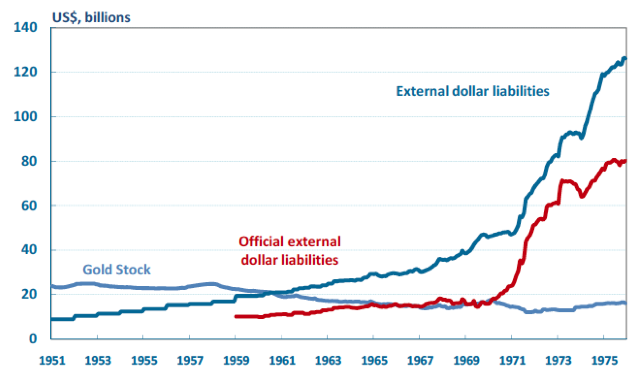 A second source of concern was the dollar’s role in providing liquidity to the rest of the world. Elimination of the US balance of payments deficits (as the French and Germans were urging) could create a global liquidity shortage. There was much concern through the 1960s as to how to provide this liquidity.

Robert Triffin (1960) captured the problems in his famous dilemma. Because the Bretton Woods parities, which were declared in the 1940s, had undervalued the price of gold, gold production would be insufficient to provide the resources to finance the growth of global trade. The shortfall would be met by capital outflows from the US, manifest in its balance of payments deficit. Triffin posited that as outstanding US dollar liabilities mounted, they would increase the likelihood of a classic bank run when the rest of the world’s monetary authorities would convert their dollar holdings into gold (Garber 1993). According to Triffin when the tipping point occurred, the US monetary authorities would tighten monetary policy and this would lead to global deflationary pressure. Triffin’s solution was to create a form of global liquidity like Keynes’ (1943) bancor to act as a substitute for US dollars in international reserves.

Policies to Shore Up the System

The problems of the Bretton Woods system were dealt with by the IMF, the G10 plus Switzerland, and by US monetary authorities. The remedies that followed often worked in the short run but not in the long run. The main threat to the system as a whole was the Triffin problem, which was exacerbated after 1965 by expansionary US monetary and fiscal policy which led to rising inflation.

After a spike in the London price of gold to $40.50 in October 1960 – based on fears that John F Kennedy, if elected, would pursue inflationary policies – led the Treasury to develop policies to discourage Europeans from conversing dollars into gold. These included:

The US Treasury, aided by the Federal Reserve, also engaged in sterilised exchange market intervention.

The main instrument used by the Fed to protect the gold stock was the swap network. It was designed to protect the US gold stock by temporarily providing an alternative to foreign central bank conversion of their dollar holdings into gold. In a typical swap transaction, the Federal Reserve and a foreign central bank would undertake simultaneous and offsetting spot and forward exchange transactions, typically at the same exchange rate and equal interest rate. The Federal Reserve swap line increased from $900 million to $11.2 billion between March 1962 and the closing of the gold window in August 1971 (see Figure 2 and Bordo et al. 2015) 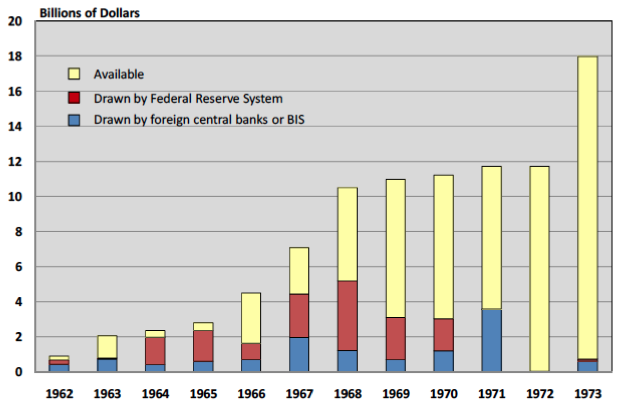 The swaps and ancillary Treasury policies protected the US gold reserves until the mid-1960s, and were viewed at the time as a successful policy.

A key force that led to the breakdown of Bretton Woods was the rise in inflation in the US that began in 1965. Until that year, the Federal Reserve Chairman, William McChesney Martin, had maintained low inflation. The Fed also attached high importance to the balance of payments deficit and the US monetary gold stock in its deliberations (Bordo and Eichengreen 2013). Beginning in 1965 the Martin Fed shifted to an inflationary policy which continued until the early 1980s, and in the 1970s became known as the Great Inflation (see figure 3). 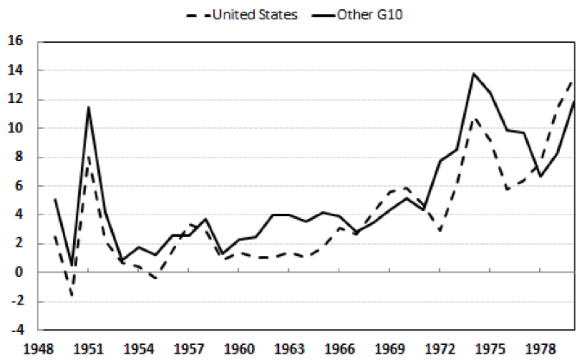 The shift in policy mirrored the accommodation of fiscal deficits reflecting the increasing expense of the Vietnam War and Lyndon Johnson’s Great Society.

The Federal Reserve shifted its stance in the mid-1960s away from monetary orthodoxy in response to the growing influence of Keynesian economics in the Kennedy and Johnson administrations, with its emphasis on the primary objective of full employment and the belief that the Fed could manage the Phillips Curve trade-off between inflation and unemployment (Meltzer 2010).

Increasing US monetary growth led to rising inflation, which spread to the rest of the world through growing US balance of payments deficits. This led to growing balance of payments surpluses in Germany and other countries. The German monetary authorities (and other surplus countries) attempted to sterilise the inflows but were eventually unsuccessful, leading to growing inflationary pressure (Darby et al. 1983).

After the devaluation of sterling in November 1967, pressure mounted against the dollar via the London gold market. In the face of this pressure, the Gold Pool was disbanded on 17 March 1968 and a two-tier arrangement put in its place. In the following three years, the US put considerable pressure on other monetary authorities to refrain from converting their dollars into gold.

The decision to suspend gold convertibility by President Richard Nixon on 15 August 1971 was triggered by French and British intentions to convert dollars into gold in early August. The US decision to suspend gold convertibility ended a key aspect of the Bretton Woods system. The remaining part of the System, the adjustable peg disappeared by March 1973.

A key reason for Bretton Woods’ collapse was the inflationary monetary policy that was inappropriate for the key currency country of the system. The Bretton Woods system was based on rules, the most important of which was to follow monetary and fiscal policies consistent with the official peg. The US violated this rule after 1965 (Bordo 1993).

The collapse of the Bretton Woods system between 1971 and 1973 led to the general adoption by advanced countries of a managed floating exchange rate system, which is still with us. Yet this outcome (at least at the time) was not inevitable. As was argued by Despres et al. (1966) in contradistinction to Triffin, the ongoing US balance of payments deficit was not really a problem. The rest of the world voluntarily held dollar balances because of their valuable service flow – the deficit was demand-determined. In their view, the Bretton Woods system could have continued indefinitely. This of course was not the case, but although the par value system ended in 1973 the dollar standard without gold is still with us, as McKinnon (1969, 1988, 2014) has long argued.

The dollar standard was resented by the French in the 1960s and referred to as conferring “the exorbitant privilege” on the US, and the same argument was made in 2010 by the Governor of the Central Bank of China. However, the likelihood that the dollar will be replaced as the dominant international currency in the foreseeable future remains remote. The dollar standard and the legacy of the Bretton Woods system will be with us for a long time.