So scream the headlines, via WSJ:

President Xi Jinping’s call for financial stability ahead of a major leadership shuffle later this year led regulators to unleash a blitz of new rules. The banking regulator under new chief Guo Shuqing has cracked down on speculative investment practices that relied on borrowed money and has also imposed sharply higher fines for irregularities.

But the new regulations, alongside tighter monetary conditions in China, have proven hard for investors to absorb. China’s main stock market has dropped 5.4% in just over a month, while yields on Chinese government bonds have risen to more-than two-year highs. Bond yields rise as their prices fall.

As a result, new corporate bond issuance in China has plunged in recent months, making life difficult for struggling private firms that have limited access to a banking sector designed to favor inefficient but politically influential state-run enterprises. Chinese companies have raised a total of 674 billion yuan via bond issuance since this year, down from 1.8 trillion yuan during the same period a year ago.

China has sent a subtle signal that it may back off from some of its aggressive financial regulation and deleveraging efforts after sell-offs in domestic stock, bond and futures markets in the past several weeks.

During a meeting with International Monetary Fund managing director Christine Lagarde on Sunday, Chinese Premier Li Keqiang said China has the ability to maintain the stability of financial markets. In a small but significant change of wording, Li put financial stability ahead of financial deleveraging and economic growth

Falling stock markets in China have been a source of concern for authorities. Photo: Reuters.

The official Xinhua News Agency ran a commentary on Sunday saying that “China should not trigger new risk from managing risks”, a tone that is slightly different from a previous series of eight commentaries that urged China to address financial risks despite short-term pain.

The change of tone reflected growing concern among investors that fast deleveraging and strict regulation will weigh down financial markets. The benchmark Shanghai composite index has dropped for five weeks, while Treasury bond yields have risen to a nearly two high of 3.7 per cent.

The slowdown was already controlled so this is not “China blinking” so much as it is China easing off the brake a little. Given the extent to which yields have run ahead it is not surprising at all. In interbank markets: 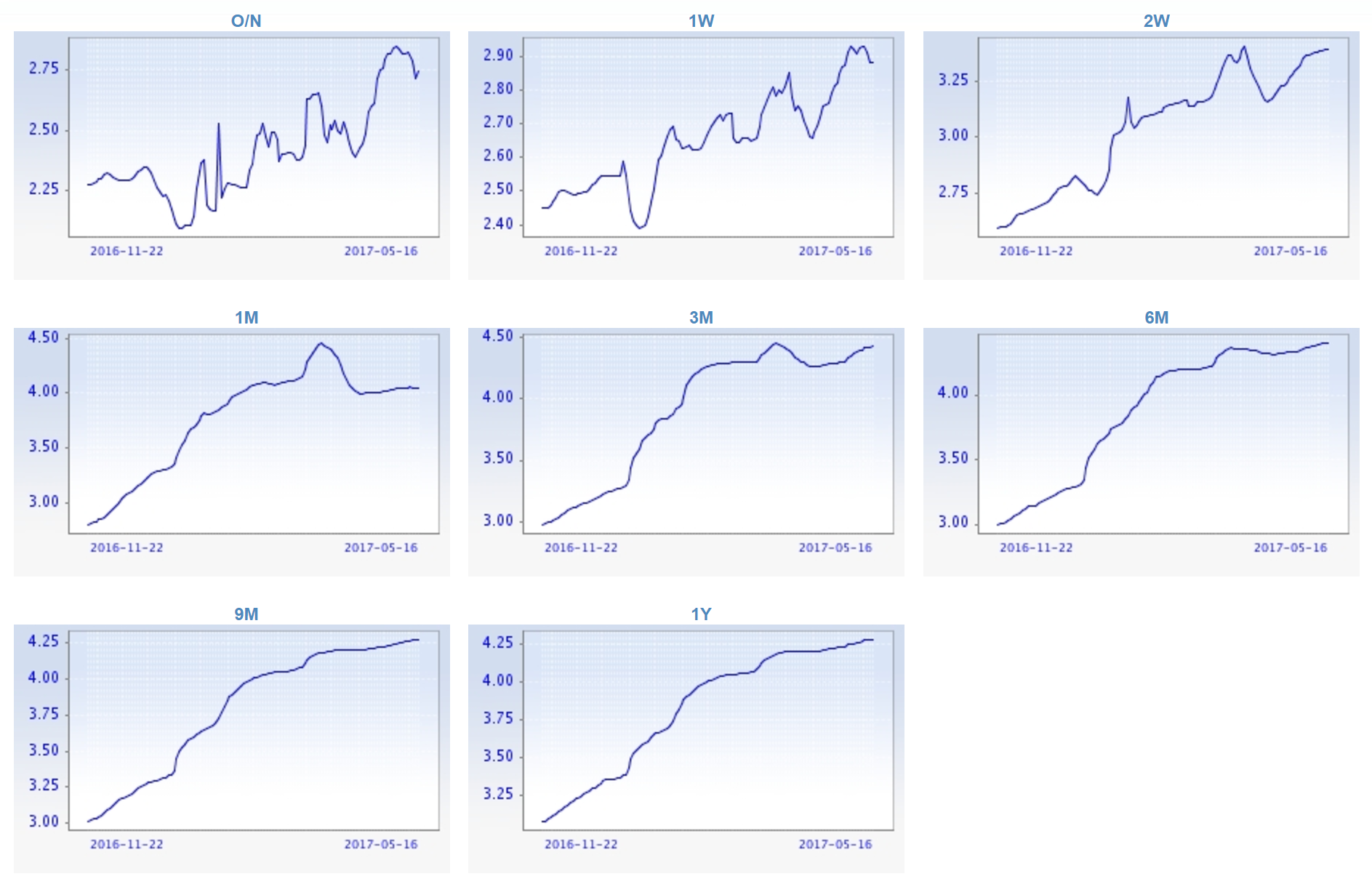 And especially bonds which have seen 135bps of tightening in six months:

For this to be China “blinking” we’d need to see rates fall back a lot. Goldman’s China stress index shows nicely where we’re at: 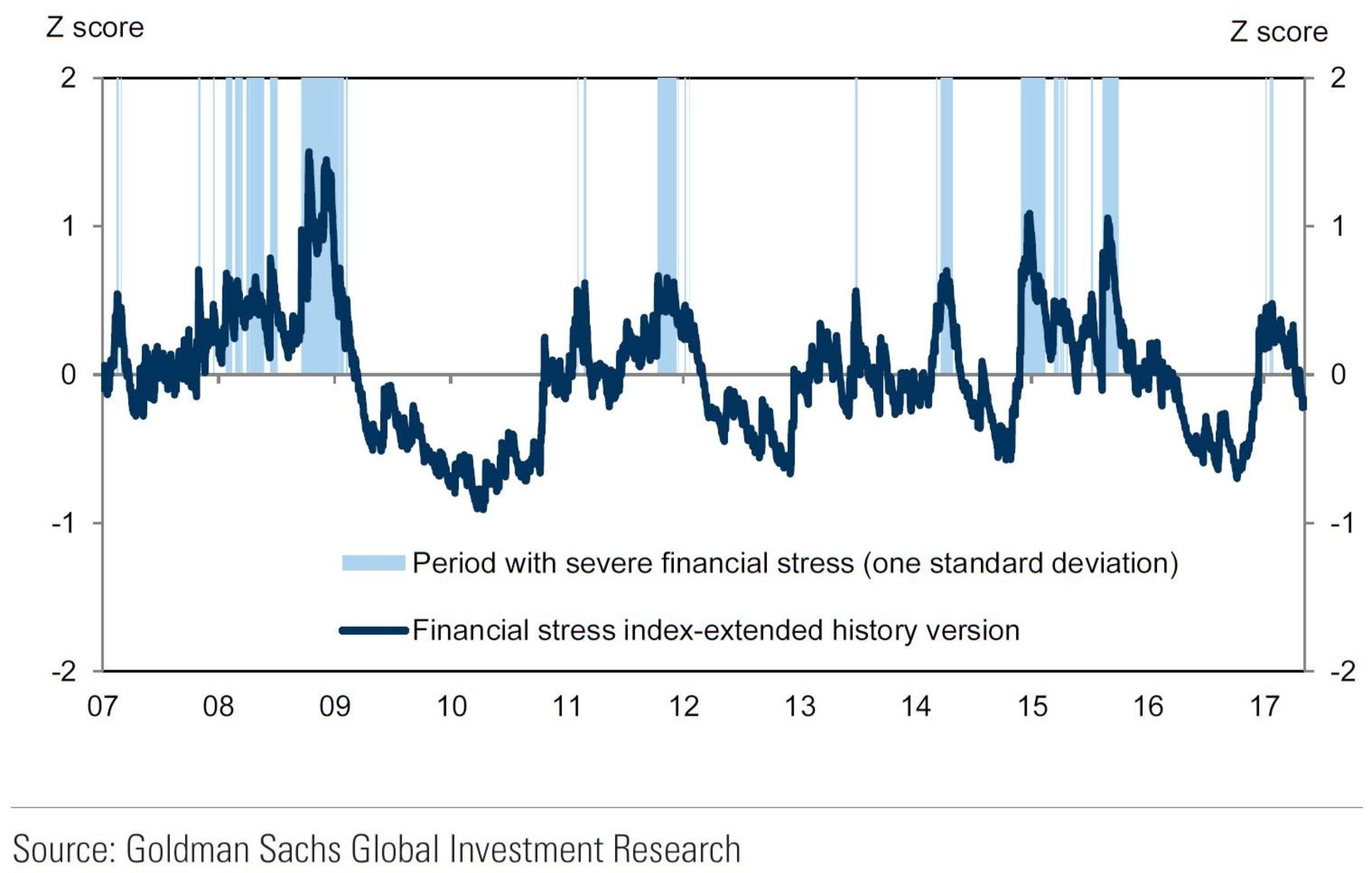 The slowdown is locked in. With Q1 growth at 6.9%, China can deliver anything down to 5.5% by year end and still hit its annual growth target around 6%. There’s no panic here, nor panic reversal.

And indeed, tightening at the margin continues, via Reuters:

China’s banking regulator is tightening disclosure rules on lenders’ wealth management products (WMP) as it tries to track risky lending practices in the shadow banking sector, the latest in a series of steps by Beijing aimed at defusing financial risks.

The China Banking Regulatory Commission (CBRC) said in a notice late on Monday it plans to launch 46 new or revised rules this year, part of which targets risks related to shadowbanking activities.

Authorities are trying to better regulate 30 trillion yuan ($4.35 trillion) of WMPs, much of it sitting off-balance sheet in the shadowbanking sector. The WMPS have been used to channel deposits into risky investments, often via many layers of asset management schemes to skirt lending and capital rules.

The CBRC will now require that banks report the underlying assets and liabilities of their WMPs, as well as all layers of investment schemes, on a weekly basis. Previously, banks were required to hand in less detailed information, and on a monthly basis.

The new rules – published by a WMP management platform under CBRC – reflect regulators’ desire to have a full picture of banks’ activities, and could slow the growth of WMPs.

Yu’E Bao, the world’s largest money-market fund, will cut its current 1 million yuan ($145,000) investment cap by more than half after receiving input from the People’s Bank of China, according to the people, who asked not to be identified discussing sensitive information. The limit may be imposed as soon as this month and will apply to new money inflows, they said.

According to the new financial reporter incomplete statistics, since mid-March this year, there have been more than 20 large and medium-sized cities to start residential ” restricted sales order “, which is no shortage of hot city hot city. Most of these cities require new purchase of commercial housing in two to three years shall not be transferred. Which is the longest selling time is Baoding, Hebei Baigou Metro – here is located in the “Central Capital Economic Circle” core area – non-local household registration in this new housing, from the date of registration within five years shall not be transferred.

So what would a backflip to more stimulus require? Capital Economics has more:

 Our central expectation is that the deceleration in the economy will be gradual. (See Chart 1.) If we’re right, the government is likely to continue its efforts to rein in financial risks over the coming months. While the PBOC toned down its language last Friday, saying that it would balance deleveraging and ensuring market liquidity remains stable, we don’t think this signals a winding down of the campaign. After all, the initiative appears to have broad support in Beijing, including from President Xi.

 But there are three developments that, if they occurred, would make officials shift course on policy. One is a sharp weakening in activity. If industrial production growth fell abruptly (e.g. by two percentage points), it would spark fresh worries about economic stability in China. The PBOC’s loosening cycles in 2008-9 and 2015 both followed sharp falls in industrial output growth.

 A surge in financial market jitters would also push officials into changing course. So far, the market reaction hasn’t been strong. The decline in equity markets has been small, the renminbi has remained stable against the US dollar, and stronger earnings have helped firms to weather the recent increase in borrowing costs. But if funding costs surged in the months ahead and caused a rise in the number of corporate bankruptcies, or if concerns about slowing growth triggered another large wave of capital outflows, officials would have to respond.

 Finally, policymakers would provide fresh support if signs of major strain appeared in labour markets. For now, the job market appears healthy. The number of new urban jobs created last quarter was 5% higher than in Q1 2016. But there are signs that conditions softened last month. The employment component of both manufacturing PMIs fell in April and by the most in nearly two years. (See Chart 2.) If conditions worsened further in the months ahead, policy would soon be eased. The last two times urban job creation slowed were in 2008 and 2015. Policymakers responded both times by easing policy.

I expect we’ll be down to high 5-handle quarterly growth by year end. Then we await Xi’s next move.