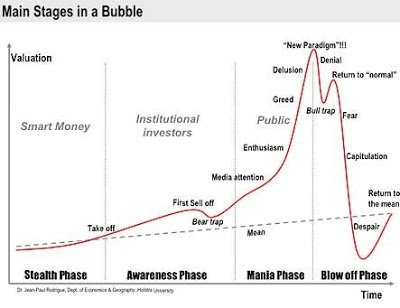 The classic shape of an economic bubble (source). Notice “New Paradigm” at the top, the point at which market participants decide “this can go forever.” Big Oil CEOs think nothing can topple the technology that turns fossil fuel into energy — that unlike every other technology in history, their technology will never be replaced.

Whom the gods would destroy, they first make mad.

—Sophocles (tr. Longfellow)
We’ve written before about the coming crisis in the fossil fuel industry, the one that extracts oil, gas and coal from deep in the earth so it can be burned as fuel. For example, this from December 13:

Despite the stranglehold Big Oil has on energy production — to enhance their wealth and for no other reason — the industry is doomed to die. There are just three questions left unanswered:

Because, make no mistake, Big Oil has a fatal disease, two of them in fact, and either or both are going to end its life as an industry. (The companies may survive, but not as carbon extraction companies; I have an interesting fantasy, in fact, about an event that would instantly kickstart a U.S. return to global climate change leadership, but I’ll save it for later.)

Disease One — Vulnerability to Climate Change Itself

The first of those diseases is the industry’s vulnerability to the inevitable climate crisis. There are only two ways our current, business-as-usual climate behavior — where we pump gigatons of CO2 into the atmosphere each year and watch ocean and atmospheric temperatures relentlessly rise — will end:

1. The Chaotic climate-response scenario — Humans don’t stop pumping carbon into the air until, as a species, we’re pre-industrial or worse; we live through the all the chaos that devolution implies; we lose the technology and numbers to do further damage; then we watch the result play out for centuries, if we survive that long. In other words, our response is to allow whatever happens to happen and try to live through it.

A chaotic, multi-decade transition from where we are now to that point (note: multi-decade, not multi-century) will be the stuff of dystopian nightmares. That transition will be global in scope, obvious as to its cause, and will play out monstrously in full view of anyone who lives into the 2030s. That’s not too many years away. In fact, the transition has started already in the Middle East and Europe. (For more, see “Climate Change in the Age of Trump“.)

Keep in mind, systemic collapses don’t always happen quickly, but many do.

2. The Voluntary climate-response scenario — Humans voluntarily and proactively end the extractive carbon industry because it’s an existential threat to survival. Whether humans do this in time to avoid the worst of what’s coming is another question. The point is that we play an effective proactive role, not a passive, reactive one, before the chaos mentioned in the Chaotic scenario overwhelms everyone.

Either of these outcomes spells the end of the fossil fuel industry. In the Chaotic scenario, the end comes when global chaos shrinks the industrial base of the planet, causing fuel prices to rocket upward because of supply shortages, then collapse because of shrinking demand. Societies in chaos don’t buy new Toyotas at anything like their old rate of purchase, and increasing the number of societies in chaos decreases the global market for all manufactured goods.

Bottom line: Climate change itself will end the industry if disease number two doesn’t do it first.

Disease Two — Vulnerability to Its Own Internal Instability

The second factor that could end this industry is described in the two pieces linked at the beginning of this one. Even in the absence of a climate crisis, the industry itself is a dinosaur, a thing of the past providing the energy source of the past. Its dominant market position is extremely unstable, since its profitability depends entirely on massive capital infusions via subsidies and on a compliant political atmosphere — and complicit politicians — to keep it afloat.

What’s more, the industry sits on a mountain of debt that can never be repaid, will never be repaid, and it’s poised between two bad pricing decisions — keep prices low, which will accelerate the industry bankruptcies caused by those debts (which will also bankrupt some banks); or raise prices higher, making the fossil fuel industry’s debt service more sustainable in the short term while driving an even faster transition to renewables in the long term.

Neither of those alternatives — death by low prices or death by higher prices — is a prescription for long life, or life at all. One alternative underfunds the industry, ultimate fatally. The other overprices its product in the midst of a decades-long recession. (For this will be a “decades-long recession,” see “America Cannot Recover from This Recession Until It Writes Down Debt to What Can Be Paid“.)

Bottom line: Even without a climate chaos event, Big Oil cannot survive as an industry because it’s critically hooked to a last-generation energy technology and has within it fatal financing flaws.

This gloomy outlook for the industry is supported by many knowledgeable insider sources. Former Guardian writer Nafeez Ahmed, an expert on the industry, and on climate change dynamics generally, recently reported on its price and debt problems for Motherboard, supporting the points I made above. Note his reference to this industry analysis, one of several he could have chosen:

We Need to Accept That Oil Is a Dying Industry

The future is not good for oil, no matter which way you look at it.

A new OPEC deal designed to return the global oil industry to profitability will fail to prevent its ongoing march toward trillion dollar debt defaults, according to a new report [pdf] published by a Washington group of senior global banking executives.

But the report also warns that the rise of renewable energy and climate policy agreements will rapidly make oil obsolete, whatever OPEC does in efforts to prolong its market share.

[A]ccording to Michael Bradshaw, Professor of Global Energy at Warwick Business School, a price hike would not solve OPEC’s deeper problems. In fact, it could speed up the transition away from oil….

As oil gets more expensive again, there is more incentive to use alternative, cheaper forms of energy—like solar photovoltaics, which can now generate more energy than oil for every unit of energy invested….

“We are not in a business as usual world,” Bradshaw said. “Higher prices for oil and gas will drive investment in efficiency and demand reduction and also substitution, so they may actually promote structural demand destruction.”

Please do note the second paragraph above. Photovoltaics can now generate more energy per unit of energy invested than oil. The technology that produced energy from fossil fuel is a dinosaur, inefficient and getting more so every day compared to what’s emerging. It’s only the political grip of the kings of that industry, the Rex Tillersons and the David Kochs, that keep it viable.

It’s not just OPEC that needs to be prepared. A report [pdf] published in October by the Group of 30 (G30), a Washington DC-based financial advisory group run by executives of the world’s biggest banks, warns investors that the entire global oil industry has expanded on the basis of an unsustainable debt bubble….

The industry’s long-term debts now total over $2 trillion, the report concludes, half of which “will never be repaid because the issuing firms comprehend neither how dramatically their industry has changed nor how these changes threaten to soon engulf them.” [emphasis added]

An $2 trillion debt burden — with $1 trillion doomed never to be repaid — will kill even the largest industry once investors become convinced they’ll never get their money back.

I’ll say again, collapses often happen quickly, especially collapses of investor confidence. And when they do, they don’t give much warning. The price floor simply gives way, and look out below.

The example most familiar to Americans is the stock market crash of 1929. But it’s by no means alone. As an earlier classic example, here’s what happened to the price of tulip bulbs, which had at one time been bid up by investors in a way that resembles the recent housing market. Once investors decided they could never get back what they paid for them — because there was no more “next fool” to sell to — the price collapsed almost immediately, each panicked seller panicking the next one.

Shown alongside that chart is the fate of the South Seas Company, a less-familiar bubble-and-bust investment of the same era. Different market, same story. 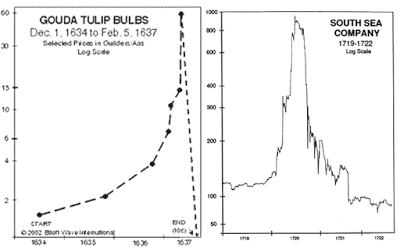 And here’s the NASDAQ price chart in the lead-up to the Dot-Com crash of 2002:

Price collapses often happen this suddenly, especially in an industry as fueled by “delusions” as this one is. See the article itself for a list of those delusions.

The Question for Americans — Not When But How

A sudden collapse that happens fairly quickly would also be chaotic, but that may not be bad, all things considered. Imagine what could happen in the country and the world if oil prices fall to, say, $25 per barrel from today’s price of about $50 per barrel. Smaller fossil fuel companies would disappear as suddenly as firefly light on a hot summer evening. The industry would be in economic turmoil, desperate for funding.

You can almost hear the cries for even greater government subsidies, added to the already massive global subsidies it now receives, $1.82 trillion, or 3.8 percent of global GDP. This would amount to our next big national bailout after the Wall Street bailout of 2009, as before with taxpayer money.

Would Americans foot the bill for a second massive bailout, so soon after the first? Would they do it if Big Oil is the recipient? I think the political chaos surrounding that public discussion would be deadly to Big Oil all on its own.

A chaotic event as well, yes, but also very welcome from a climate change standpoint. One alternative to a hated, massive Big Oil bailout would be to provide the same money as a subsidy to the renewables industry, giving it a needed “putting a man on the moon” boost to replace Big Oil. If that were the outcome of a Big Oil industry collapse, I’d take it tomorrow.