While we, as well as the few bearish peers we have, have warned of a pending “credit event” in China for some time now – admittedly incorrectly (China has proved much more resilient than expected) – the more recent red flags are among the most profound we’ve seen in years – in short, we agree with fresh observations made by some of the world’s most famous iron ore bears. Thus, while it is nearly impossible to pinpoint exactly when the credit bubble will definitively pop in China, a number of recent events, in our view, suggest the threat level is currently at red/severe.

WHERE IS CHINA AT TODAY VS. WHERE THE US WAS AT AHEAD OF THE SUBPRIME CRISIS? At the peak of the US subprime bubble (before the failure of Bear Stearns in Mar. ‘08, and subsequently Lehman Brothers in Sep. ’08, troubles in the US credit system emerged as early as Feb. ’07), the asset/liability mismatch was 2% when compared to the total banking system. However, in China, currently, there is a massive duration mismatch in wealth management products (“WMPs”). And, at $4tn in total WMPs outstanding, the asset/liability mismatch in China is now above 10% – China’s entire banking system is ~$34tn, which is a scary scenario. In our view, this is a very important dynamic to track given it foretells where a country is at in the credit cycle.

WHAT ARE THE SIGNS WE ARE SEEING? In short, we see a number of signs that point to what could be the beginning of the “popping” of the credit bubble in China. More specifically: (1) interbank rates in China are spiking, meaning banks, increasingly, don’t trust each other – this is how any banking crisis begins (Exhibit 1), (2) China’s Minsheng Bank recently issued a ghost/fraudulent WMP (they raised $436mn in funds for a CDO-like asset that had no assets backing it [yes, you heard that right] – link), (2) Anbang, the Chinese conglomerate who has used WMP issuance as a means to buy a number of assets globally (including the Waldorf Astoria here in the US),  is now having issues gaining approval for incremental asset purchases (link), suggesting global investors may be getting weary of the way in which Anbang has “beefed up” its balance sheet, (3) China’s top insurance regulator, Xiang Junbo, chairman of the China Insurance Regulatory Commission, is currently under investigation for “severe” disciplinary violations (link), implying some/many of the “shadow” forms of transacting in China could become a bit harder to maneuver (which would manifest itself in higher rates, which his exactly what we are seeing today), and (4) as would be expected from all of this, as was revealed overnight in China, bank WMP issuance crashed 15% m/m in April to 10,038 from 11,823 in March, a strong indicator that faith in these products is indeed waning. 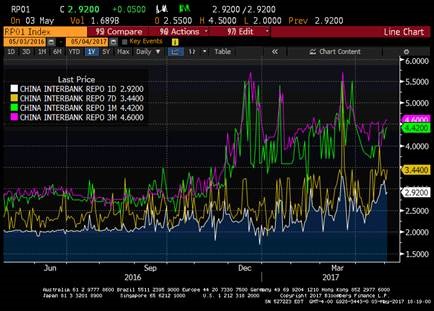 DOES CHINESE PRESIDENT XI JINPING HAVE ALL OF THIS UNDER CONTROL? In a word, increasingly, it seems the answer is no. What’s the evidence? Well, in March, interbank rates spiked WAY past the upper corridor of 3.45% to ~11% (Exhibit 2), a strong indicator that the PBoC is losing its ability to “maintain order”. And, admittedly, while there are levers the PBoC can pull, FX reserves are at scary low levels (discussed below), suggesting the PBoC is quickly running out of bullets. Furthermore, corporate bond issuance in China was negative in C1Q, which means M2 is going to be VERY hard to grow (when MO is negative); at risk of stating the obvious, without M2 growth in China, economic growth (i.e., GDP) will undoubtedly slow – this is not the current Consensus among market prognosticators who think things are quite rosy right now in China; yet, while global stock markets are soaring, the ChiNext Composite index is down -7.5% YTD vs. the Nasdaq Composite Index being up +12.8% YTD. In our view, given China’s importance to the global commodity backdrop, we see this as a key leading indicator (the folks on the ground in China are betting with their wallets, while global investors continue to place their hopes on: [a.] a reflationary tailwind that we do not believe is ever coming [China is now destocking], and [b.] hope that President Trump will deliver everything he’s promised [which, in this political environment, we see is virtually impossible]). 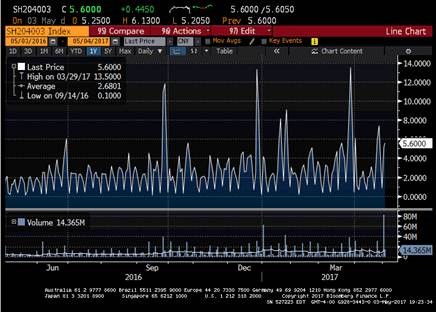 CHINA’S FOREIGN EXCHANGE (“FX”) RESERVES ARE DANGEROUSLY CLOSE TO LOW LEVELS THAT WILL LIKELY CAUSE AN INFLECTION LOWER IN THE CURRENCY. Based on a fine-tuning of its formula to calculate “reserve-adequacy” over the years, the International Monetary Funds’ (“IMF”) approach can be best summed up as follows: Minimum FX Reserves = 10% of Exports + 30% of Short-term FX Debt + 10% of M2 + 15% of Other Liabilities. Thus, for China, the equation is as follows: 10% * $2.2tn + 30% * $680bn + 10% * (RMB 139.3tn ÷ 6.6) + 15% * $1.0tn = $2.7tn of required minimum reserves. Furthermore, when considering China’s FX reserve balance was roughly $4tn just 2 years ago, we find it concerning that experts now peg China’s unofficial FX reserve balance somewhere in the $1.6-$1.7tn range. Why does this differ from China’s $3.0tn in reported FX reserves as of Feb. 2017? Well, according to our contacts, when adjusting for China’s investment in its own sovereign wealth fund (i.e., the CIC) of roughly $600bn, as well as bank injections from: (a) China Development Bank (“CDB”) of roughly $975bn, (b) The Export-Import Bank of China (“EXIM”) of roughly $30bn, (c) the Agricultural Development Bank of China (“ADBC”) of roughly $10bn, as well as capital commitments from, (d) the BRICs Bank of roughly $50bn, (e) the Asian Infrastructure Investment Bank (“AIIB”) of $50bn, (f) open short RMB forwards by agent banks of $300bn, (g) the China Africa Fund of roughly $50bn, and (h) Oil-Currency Swaps with Russia of roughly $50bn, the actual FX reserve balance in China is closer to $1.69tn (Exhibit 3).

Stated differently, based on the IMFs formula, sharply contrasting the Consensus view that China has years of reserves to burn through, China is already below the critical level of minimum reserve adequacy. However, using expert estimates that $1.0tn-$1.5tn in reserves is the “critical level”, and also considering that China is burning $25bn-$75bn in reserves each month, the point at which the country will no longer be able to support the renminbi via FX reserves appears to be a 2017 event. At that point, there would be considerable devaluation in China’s currency, sending a deflationary shock through the world’s commodity markets; in short, we feel this would be bad for the steel/iron ore stocks we cover, yet is being completely un-discounted in stocks today (no one ever expects this event to occur). 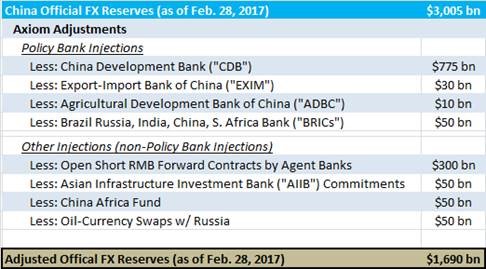 The early 2007 analogy is a good one. This is coming at some point in the next few years. I remain on guard but skeptical at this point given China does have other levers it can pull to keep the credit running and is indeed pulling them in fiscal policy. As well, the problem can always be made worse before it’s made better. Authorities are, after all, bringing this on.

It’s a fascinating question. Could China endure a “sudden stop” in credit if counter-party risk exploded, much like happened to Wall St in 2008? The usual analysis reckons that China’s publicly owned banks can always be ordered to lend more but what if they lose faith in each other? It’s probably true that Chinese authorities could still force feed credit into the economy but, equally, it’s difficult to see how an interbank crash in confidence would not slow the injection, at minimum via choked off-balance sheet vehicles like WMPs.

There is no doubt, at least, about what happens when it does arrive:

It’s the great reset event for Australia’s bloated living standards. That is why we say to you get your money offshore today. We can help you do that when the MB Fund launches in the next month with 70% international allocation.