In the US, the press has focused on student debt as a big impediment to household formation, typically a necessary but not sufficient condition for childrearing. We’ve pointed out a related obstacle, which is employment instability. Even if a young person manages to join the salaried class, as opposed to being stuck in the precariat, the average job tenure is 4.4 years. How can you make 17 plus year commitment to bringing up a child when you have no idea whether you’ll have the means to support yourself on a consistent basis, let alone your offspring?

It should be no surprise that that this week, the Center for Disease Control announced that for the first time in the US, women in their 30s were having more children than women in their 20s. While older parents are arguably more mature, and hopefully on a bit more solid footing financially, there was a lot of logic in the traditional norm of starting to have children young, as in the mother’s early to mid 20s. Younger people have more energy. It was a common lament at Goldman that men in their early 30s couldn’t handle the same level of sleep deprivation that they could eight to ten years earlier. And there is also evidence that younger parents have healthier babies, although the real break in outcomes seems to start around 40 (for instance, the odds of a Downs Syndrome baby rises markedly when the mother is over 40).

MacroBusiness describes a third impediment, which is particularly binding in the Australian context and relevant here: the cost of housing.

By Leith van Onselen, who has previously worked at the Australian Treasury, Victorian Treasury and Goldman Sachs. You can follow him on Twitter at MacroBusiness

Earlier this week, The ABC published a report arguing that childless couples will be Australia’s most common family type by 2023:

One sociologist says the trend is already happening, and future government policy will determine whether the traditional family model continues to exist.

For many millennials… changing financial and social realities are important factors in the choice to have kids.

…couples [are] delaying their decision to extend their families, a trend which paired with Australia’s ageing population means the nuclear family is in decline.

The Australian Bureau of Statistics estimates between 2023 and 2029, there will be more people in a relationship living without children than families with kids…

University of Melbourne sociologist Leah Ruppanner said while the trend of not having children varies between countries, it is already happening in Australia…

She expects the 2016 Census data, which has not been fully released yet, will show an increase in households without children.

This was followed by another article bemoaning the fact that more and more children are continuing to live with their parents well into adulthood. From The Daily Telegraph:

Get used to that childhood bedroom, you’ll be there for the next 40 years. Every week the great Australian dream seems to slip further away…

Sure they might go to uni but their industry of choice will probably change more rapidly than their qualification, which will have a hefty student debt attached anyway. Children are already priced out of the communities in which they grew up.

“A growing proportion of younger generations, while overwhelmingly maintaining a sustained appetite to live the dream, are staying home with parents — increasingly into their 30s — to save for deposits,” it says in doom-laden pages.

“It captures the degree to which parents are being expected to assist their adult children in either saving for — or paying for — a home, and reveals how families with low incomes and or young children are becoming more vulnerable to mortgage stress”…

The empty nest is the forever nest. Youth see low wage growth and being locked out of buying a home. The family dynamic is changing and from an independence point of view, that is bad news for everyone.

The above articles should hardly be a surprise to anyone, given Australia’s politico-housing complex has deliberately engineered expensive housing via the combination of:

To the above flawed housing policies you can also add increasing higher education costs (and debts), as well as poor labour opportunities for young people.

Since the GFC, overall youth employment has fallen by 3.6% in trend terms, despite the 6.9% lift in the youth population over this time, with full-time jobs down an incredible 21.2%. By contrast, the overall number of jobs for the rest of the labour force has risen by 15.3%, with full-time employment up 10.7% (see below table).

Youth underemployment was also at an all-time high 17.7% as at February (see next chart). 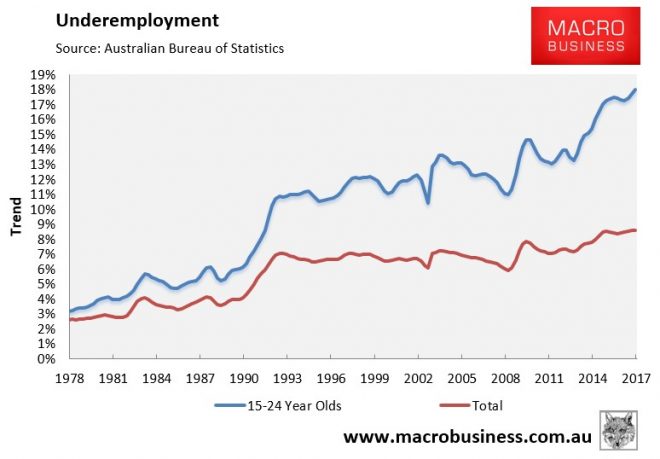 The fact is, young people need financial stability – and preferably a roof over the own heads – before they even contemplate having children. However, with one of the world’s most expensive housing markets, disappearing full-time jobs, and rising university debts, such stability is become rarer in Australia, so it’s no wonder couples are delaying (or choosing to go without) having children.

The saddest part is that policymakers’ likely response will be to ramp-up immigration even further in order to inject younger workers into the economy and ‘solve’ the fake ageing population problem (even though immigration is totally ineffective in this regard). In turn, increased mass immigration will further raise housing costs, as well as boost competition for jobs and lower wages. It will make the whole problem of Aussies not having kids and staying at home even worse.