Yves here. This post originally had the title, Intergenerational mobility and preferences for redistribution, but as you will see, it is mainly about America. The state by state breakdowns of actual versus perceived odds of rising economically is revealing. The tidbit at the end, reactions to factual information, is more predictable based on other experiments with people with pre-existing beliefs.

Americans are generally thought to view the economic system as fair and see wealth as a reward for ability and effort, while Europeans tend to believe that the economic system is unfair, and that wealth is the result of circumstances. This column tests this using new evidence on beliefs about intergenerational mobility in four European countries and the US, and confirms that Europeans do indeed tend to be overly pessimistic about moving up the social ladder compared to reality, while Americans are overly optimistic. These perceptions have important implications for how redistribution and equal opportunity policies will be received.

John Steinbeck conjectured in 1966 that there is not much support for redistribution in America because the working poor saw themselves as “temporarily embarrassed millionaires” (Steinbeck 1966). Are people willing to accept high levels of inequality if they think that everyone has a shot at climbing the social ladder? Is tolerance for inequality linked to belief in equality of opportunity?

These questions are especially relevant today, with sharply increasing inequality in many industrial economies and especially in the US. Whether or not redistribution or equal opportunity policies are supported depends on perceptions of fairness of the market system.

The (stereo)typical view on intergenerational mobility distinguishes between ‘American’ and ‘European’ attitudes. Americans are thought to view the market system as relatively fair, and to believe in the ‘American dream’. Thus, they see view wealth as a reward for ability and effort, and poverty as the result of inability to take advantage of opportunities. In contrast, Europeans tend to believe that the economic system is unfair, and that wealth is the result of family history, connections, and sticky social classes. Poverty is the result of bad luck and the inability of society to take care of the needy regardless of their effort (Alesina and Glaser 2004).

Today, however, the American dream may be more accurately described by the green light at the end of Daisy’s dock in The Great Gatsby – which Gatsby likes to contemplate and reachs for relentlessly – the embodiment of a “dream” that seems “so close that [we] could hardly fail to grasp it”, that provides Gatsby with profound motivation to work hard and succeed, and yet ends up being out of reach and unattainable. In fact, new data (Chetty et al. 2014) suggest that intergenerational mobility in the US may, in fact, not be higher on average than in Europe, even though within the US there are large geographical differences in intergenerational mobility.

Figure 1 illustrates these results. Panel A shows the average perceived probability of remaining in the bottom quintile against the real probability in each country. Points above the 45-degree line therefore indicate more pessimistic perceptions. Panel B similarly illustrates the probability of moving from the bottom to the top quintile. In this figure, being optimistic about mobility implies being above the 45-degree line. Europeans are not only more pessimistic than Americans, they are also overly pessimistic relative to reality, while Americans are overly optimistic. Americans vastly overestimate the probability of making it to the top of the ladder for children starting from the bottom. This is the embodiment of the idea of the American dream. Europeans are instead overly pessimistic about the chances of getting out of poverty – that is, out of the bottom quintile.

Figure 1A Perceptions of and actual intergenerational mobility Figure 1B Perceptions of and actual intergenerational mobility Interestingly, and this is a finding worthy of additional research, we find that Americans are especially overoptimistic about social mobility in parts of the country where actual mobility is especially low (the south and the southeast), and they are pessimistic where mobility is actually high (the north and northwest). This is shown in the three maps of Figure 2. Map A shows the different level of social mobility as measured by Chetty et al. (2014). Map B shows the perceptions of social mobility derived from our data. Even a cursory look at these two maps shows a clear inverse correlation, highlighted in Map C, which shows the ratio of perceived to actual mobility. 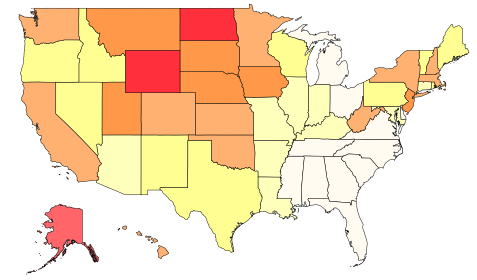 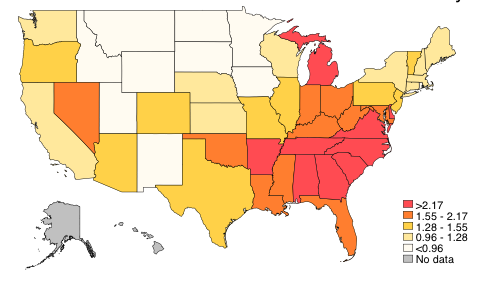 A majority of Americans tend to believe that the economic system is fair, while French and Italian respondents have extremely negative views about the fairness of the system, and show extraordinarily low levels of trust in the government regarding policies to increase opportunities. Half of US respondents agree that the system is fair, and 53% believe that everyone has a chance of making it. Only 10% and 19% of Italian and French respondents, respectively, agree that the system is basically fair. Similarly, only 13% of Americans say that they never trust the government, in comparison with 29% of Italian and 33% of French respondents.

We also uncover deeply polarised views on policy. Left-leaning respondents are pessimistic about social mobility and the more pessimistic they are, the more they see a role for government in implementing equal opportunity policies, like spending more on public health and education, and financing them with more progressive income taxes. In contrast, right-leaning respondents seem to see the government as the problem rather than the solution, and even those who are pessimistic about social mobility do not want more government spending.

In the final part of the survey, we performed a randomised experiment. To the treated group, we showed an animation meant to make them more pessimistic about social mobility. The treatment had a strong first stage, and those who saw it had more pessimistic views about social mobility than those who did not see it. It reinforced the polarisation of respondents. Left-wing respondents who saw the animation wanted even more government intervention. Right-wing respondents – even though they were made more pessimistic about social mobility by the animation – did not want the government to do anything to correct the problem. Thus, the treatment had the effect of either ‘preaching to the choir’ or ‘preaching to the deaf.’ Our findings confirm the idea that “the message of the right is increasingly: It’s not your fault that you’re a loser; it’s the government’s fault” (Vance 2016).