Lambert here: Of use despite the deceptive headline, which promises a review of “health reform in the age of Trump,” while the article discusses only the ACA and Republican efforts to “reform” it, erasing efforts to pass Medicare for All at both the state and Federal level. To be fair, perhaps one should not expect too much from professors of “public policy” (for some definition of “public”).

Editor’s note: This column first appeared as a chapter in the Vox eBook, Economics and policy in the Age of Trump, available to download here.​

The Affordable Care Act (ACA), enacted in 2010, was intended to address long- standing problems with the American system of health care and health insurance. Chief among these were spiralling costs and a substantial number of individuals – roughly 50 million in 2010 – without any insurance coverage. In addition, the exclusion of employer-paid health insurance premiums from income and payroll taxes raised the spectre of inefficiency along multiple dimensions, potentially reducing job mobility and entrepreneurship while bloating the benefits offered by employers, as well as raising equity concerns about an annual tax expenditure of over $250 billion that disproportionately benefits higher-income households.

In this column, we review the main provisions of the ACA related to insurance coverage and healthcare costs, including what is known so far about their impact. We also discuss the recent Republican attempt to ‘repeal and replace’ the law, which would have reduced and restructured both the ACA’s subsidies for the purchase of private health insurance and the Medicaid programme while eliminating many of the ACA’s taxes, largely benefiting the highest-income taxpayers. Although this proposal failed, it is unlikely to be the Republicans’ last attempt to dismantle the ACA; it thus provides useful insight into the views of the ACA’s opponents. We conclude by discussing ongoing challenges that face the US healthcare system. 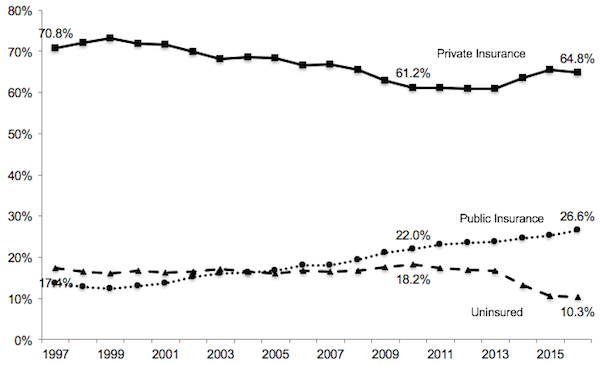 Notes: Data are from the National Health Interview Survey as reported by Martinez and Cohen (2011) and Martinez et al. (2017). Figures represent the percentage of individuals with each type of coverage at the time of the survey. Public insurance includes Medicaid, CHIP, state- sponsored or other government-sponsored health plan, Medicare, and military plans. Private insurance includes plans obtained through an employer, purchased directly or purchased through local or community programmes. Because respondents can report multiple sources of coverage, the figures for a given year add up to more than 100%. The data for 2016 pertain to the period January to September. In all other years, the estimates are based on surveys conducted throughout the year

The ACA was intended to control costs in two senses: first, by reducing (or at least not increasing) the deficit as projected by the nonpartisan Congressional Budget Office (CBO), which was critical to the ACA’s political viability; and second, by introducing a variety of policies aimed at changing economic incentives in the healthcare system with the goal of ‘bending the curve’ of health spending. The ACA succeeded in the first sense, more than paying for the increased spending associated with the ACA’s new programmes through cuts to existing programmes (primarily Medicare payments to providers and insurers) and increases in taxes (primarily on very wealthy individuals) over the initial ten-year window scored by the Congressional Budget Office (CBO 2010).

At this early stage, it is less clear whether the ACA is succeeding in bending the curve of health spending. The ACA introduced a number of programmes to move the Medicare programme away from fee-for-service payments and toward reimbursement systems that better align provider incentives to provide high-value care, such as the shared savings/ accountable care organisation programme and bundled payments for certain services. It is also true that the implementation of the ACA coincided with a period of historically low growth in US health care spending (Council of Economic Advisers 2016); the jury is still out on whether the ACA programmes are, in fact, reducing spending (Doran et al. 2016, McWilliams et al. 2014, 2015, 2016, Nyweide et al. 2015).

One ACA provision that is of particular interest to economists is an excise tax on high- cost employer-sponsored health insurance plans. This ‘Cadillac tax’ was designed not only to raise revenue, but also to give employers an incentive to consider more efficient benefit designs, and can be seen as a somewhat more politically feasible alternative to limiting the exclusion of employer-paid premiums. Nonetheless, the Cadillac tax remains in political limbo, having been postponed until at least 2020.

Repeal and Replace, Part I: The American Health Care Act of 2017

In March 2017, Donald Trump and Congressional Republicans moved quickly to make good on their promise to ‘repeal and replace’ the ACA. House Republicans drafted the American Health Care Act of 2017 (AHCA), which proposed major changes to the design of the ACA’s tax credits and to Medicaid.

Like the ACA, the AHCA included advanceable, refundable tax credits for the purchase of private health insurance. But whereas the ACA’s tax credits are based on income and the cost of coverage, so that most consumers are effectively insulated against large premium increases, the AHCA’s tax credits varied only with age, with older consumers getting slightly larger credits.

The AHCA would have made even larger changes to the Medicaid programme, changing it from an entitlement for which the financing is split between the Federal government and the states to essentially a ‘block grant’ model.

The CBO projected that the AHCA would cause the number of Americans without health insurance to increase by 18 million in the first year the policy was in place. By 2026, after the elimination of the ACA Medicaid expansion and of subsidies for insurance purchased through the ACA marketplaces, that number would increase to 32 million (CBO 2017).

Editor’s note: This column first appeared as a chapter in the Vox eBook, Economics and policy in the Age of Trump, available to download here.​

The AHCA can be seen as an attempt to find a middle ground between hard-line conservatives who wanted to repeal the ACA outright and more moderate Republicans who were uncomfortable returning to the pre-ACA status quo. At the time of this writing, the Republican leadership is working to find this middle ground. In March, they chose not to put the bill to a vote when it became clear that it would not pass. In May the bill was modified to make certain parts less objectionable to conservatives, and other parts less objectionable to moderates. Whether this compromise will attract sufficient support in the Senate remains to be seen.

The Trump administration and Republican leaders in Congress must now decide what chapter they will write in the ongoing book of health reform. They may interpret this assignment narrowly or broadly.

A narrow interpretation would lead them to focus on the question ‘what should we do about the ACA?’ On this question, there are three paths they might take.

The first is to continue trying to craft major reforms to repeal and replace the ACA. The experience with the AHCA suggests that this will be a very challenging task politically.

A second path would be to eschew major legislation in favour of quietly starving the ACA, for example by refusing to actively encourage insurers and individuals to participate in the marketplaces and discouraging additional states from expanding Medicaid. Since Republicans took control of Congress in 2011 they have claimed to be pursuing the first path, introducing numerous bills to repeal or replace the ACA. However, since there was no chance of this legislation being enacted with President Obama in the White House, these bills were political statements rather than serious legislation. As a result, their actual strategy was more along the lines of the second path.

A third path would be to acknowledge that the ACA, from an economic perspective, already represents a moderate, market-based approach to providing coverage to tens of millions of Americans, and to assume a role of stewardship for making these programmes work. This would involve fully funding cost-sharing subsidies for low-income households in the marketplaces (currently under legal attack by House Republicans); enforcing the individual mandate; extending and funding a federal reinsurance programme in order to encourage private insurers to remain in the marketplaces; and working with the 19 states that have not expanded Medicaid to find approaches they can embrace, building on the success of Republican-led states like Michigan and Ohio that have expanded Medicaid coverage through waivers.

There is, however, a broader view that this Administration might take on health reform. This broader view would require them to move beyond the current focus on the ACA to consider the problems the ACA was intended to solve.

The Administration might, for example, try to do more to address the long-run cost problems facing the Medicare and Medicaid programmes. Ideally this would be achieved not simply by pushing costs onto beneficiaries or state governments, but would also include a search for solutions that yield higher value for the government’s dollar. These solutions might involve the private provision of publicly-subsidised coverage – as in the ACA’s health insurance marketplaces, Medicaid managed care, or the Medicare Advantage programme – or they might involve the design of better provider payment models for publicly provided coverage, as in the ACA’s Medicare Shared Savings Program.

The broader view might also include an effort to impose some order on the complex tax treatment of private health insurance. The current patchwork system involves a regressive exclusion for employer-provided coverage, progressive refundable credits for marketplace coverage, and a politically unstable excise tax on high-cost employer plans to be implemented at some future date.