By Lee Camp, the creator, host, and head writer of the comedy news show “Redacted Tonight with Lee Camp” that airs every Friday on RT America and at YouTube.com/RedactedTonight. He’s a former comedy writer for the Onion and the Huffington Post and has been a touring stand-up comedian for 18 years 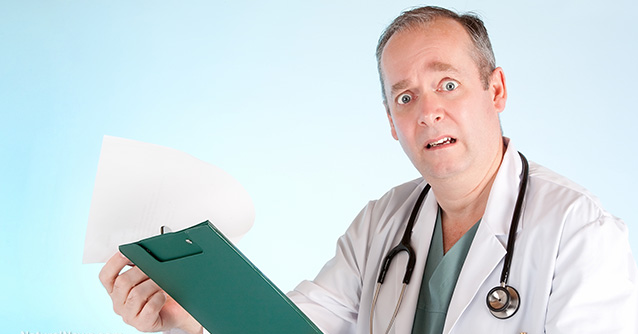 Sure, there are red-faced politicians screaming about one make-believe side or the other, but that doesn’t mean there’s a legitimate debate. In order for there to be a debate, there needs to exist two sides that – if argued well – could seem to hold merit. But that’s nowhere to be found in the current healthcare debate. Instead there are two sides, both of which are disingenuous, both of which are corrupted by big money, both of which are hardly even SIDES;  instead they’re two separate spots in the center of whatever proverbial thing we’re picturing having sides. (I’m picturing a duck. Not sure why.)

The debate SHOULD be “Is our country wealthy enough to cover the healthcare of every man, woman, and child without causing extraordinary harm to other citizens?” If the answer is yes, then the answer is do it. (And the answer is yes.) The other side of the debate should be, “Let ‘em die.” …I admit the second side of the argument is a bit terse, but not without merit –especially if the dying patient happens to be the man who gave a young Michael Bay his first camcorder, thereby putting us all on an inescapable, calamitous path to a future involving at least 7 and as many as 36 “Transformers” movies. (I mean, a small car turns into a 5-story-tall robot with heavy artillery, and hundreds of millions of viewers are just FINE with that?? It doesn’t even adhere to the law of conservation of mass! …And THAT gaping plot hole is then followed by two hours of meaningless metal pieces flying at your face in a vomit-inducing tornado of suck. God help you if that suck is in 3D!) So if that camcorder-distributing man were to get a rare lung infection generally only found in lemurs in the deep corners of the Amazon, I could quite easily be talked into joining the “let ‘em die” camp.

Don’t get me wrong. Trumpcare is undoubtedly worse. The estimates are that by 2026 as many as 51 MILLION Americans would be uninsured. As of 2016 there were still 27 million Americans without health insurance. But saying Trumpcare is worse and Obamacare is better is like saying, “It’s better to catch crabs from sleeping with a hot young lady, than to get it from a used gym towel.” Sure. I guess. But shouldn’t we just be focusing on the fact you have crabs? Who gives a shit about the towel? And shouldn’t you also switch gyms?

Our healthcare system – both Obamacare or the possible Trumpcare – is a travesty on par with your beloved dog getting hit by a truck carrying your favorite flavor of ice cream. Not only do you lose your best friend, but now your favorite ice cream tastes like profound depression and loss.

Remember, under Obamacare 27 million people still don’t have healthcare, and millions of people have filed for bankruptcy over the past decade because of healthcare costs, and rich people live on average 15 years longer than poor – partially due to the cost of good healthcare. This unmitigated failure of a healthcare system in “the wealthiest country in the world”  will get even worse under any conceivable version of Trumpcare. It will kick millions of people off their insurance and will set up what remains of Obamacare to crumble to the ground so that Trump can go, “I told you it would collapse!” (Most of Trump’s presidency seems to be premised on the idea that he can just set up everything to collapse even further and then sell ugly hats that say, “I fucking told you so!” as he rides off into the sunset in a double-wide helicopter.)

But all of these healthcare plans are simply tinkering around the edges of a unique torture device designed to suck money out of desperate Americans – or Americans when they’re at their most desperate – and place it gently into the pockets of morbidly obese insurance companies. THAT is the system. By design, that IS the system. Or rather, it’s the versions of the system that get heavy rotation on our mainstream media. Sure, ideas such as universal healthcare exist, but they’re only allowed a quick 3-minute shout-out by Bernie Sanders before MSNBC plays him off like he’s an Oscar speech that has gone on too long. “I’m sorry! That’s all the time we have for the only rational, moral course for our country to take on healthcare. Coming up next, 4 hours of Obamacare vs. Trumpcare! The battle of the titans!”

Universal healthcare is the electric fence that our politicians don’t want to touch, nor even piss on. Just last week Democrats in California killed the single-payer plan even though they could’ve passed it if they had wanted to.

We are debating between two horrific, criminal versions of healthcare designed to make people rich off of the pain and suffering of every American. Yes, Obamacare is better. Yes, Trumpcare is worse. Yes, I don’t care. By acting like this is a legitimate debate, we are subconsciously solidifying cultural hegemony for the idea that healthcare should be something exploited for profit. It should not. Stop dignifying that thought process.