By Jianwei Xu, an associate professor at Beijing Normal University, and also works as an affiliate fellow at China Academy of Social Science and a youth member of the China Finance Forum 40. Originally published at Bruegel

Pharmaceuticals are a hugely important industry for the EU and the UK. The sector creates thousands of jobs, billions of euros in exports, and is Europe’s most research-intense industry. But will Brexit mean for pharma? Border delays, disruption to R&D and regulatory divergence all pose hazards.

Despite numerous debates about the impact of Brexit, the pharmaceutical industry seems to be less eye-catching than other sectors like the manufacturing supply chain and financial services. However, pharmaceuticals are one of the EU’s most important and fastest-growing industries, and they benefit greatly from EU integration.

Pharmaceutical in the EU has increased from €125 billion to €225 billion over the past fifteen years. Employment in the sector also grew dramatically from 535000 to 725000. The pharmaceuticals sector has also become very advantageous for the EU. Exports of pharmacy products have more than tripled over the past fifteen years, with most of these gains obtained from extra-EU transactions. Pharmaceuticals are also the third largest industry in the UK, contributing 10 percent of the UK’s GDP, with an employment of 73000 people and a trade surplus of €3.3 billion.

Table 1: The rapid growth of the European pharmaceutical industry

The rapid advance of the pharmaceuticals sector over the past decade can be closely associated with the integration of the EU trade chain. In 2016, around 67% of the EU’s exports of its products were intra-EU exports; 52% of the EU’s imports of its products were intra-EU imports. According to EFPIA figures, among the EU member states the UK is undoubtedly a key player, constituting 10% of the EU’s total production and employment. Moreover, the UK runs a trade deficit of €114 billion against the other EU27 countries, implying that it is a major destination for EU pharmaceutical products.

Fortunately, the EU has long adopted zero most-favored-nation tariffs even for international extra-EU transactions for pharmaceutical products. So the worst scenario, even in a hard Brexit where the EU and UK treat each other in the WTO multilateral framework manner, would not add a specific tariff burden on pharmaceutical trade.

However, tariffs are not the only barrier to trade. There is also a possibility that other types of non-tariff barriers could be created to hamper pharmaceutical trade. In particular, with the strengthening of immigration control, border checks might be resumed which could create delays in transferring pharmaceutical products to/from the UK. Longer lead times and increased paperwork caused by these customs bottlenecks could affect service levels and margins – especially for pharmaceutical products, which have a short shelf life. Evidence has shown that, for time-sensitive industries, every 1 hour of customs delay adds 0.8 percentage points to the ad valorem trade-cost rate and leads to 5% less trade. This means that perishable pharmaceutical products are likely to cost more for UK residents, especially in the case of emergency.

The establishment of a physical border also matters particularly for Ireland. Ireland is the only country that shares a land border with the UK. Although it is hard to say what will eventually happen in the event of Brexit until the final post-Brexit model is determined, the risk has been mounting since Theresa May’s report signaling a hard Brexit. Establishing an Irish-Irish border would mean that Irish pharmaceutical products need to go across the UK border twice before entering the rest of the EU. One solution to avoid this additional processing cost is to construct a common border for two countries, which was already the case for passengers from 16 countries such as China and India to enter the region. But that undoubtedly means additional costs for Irish pharmaceutical consumers. 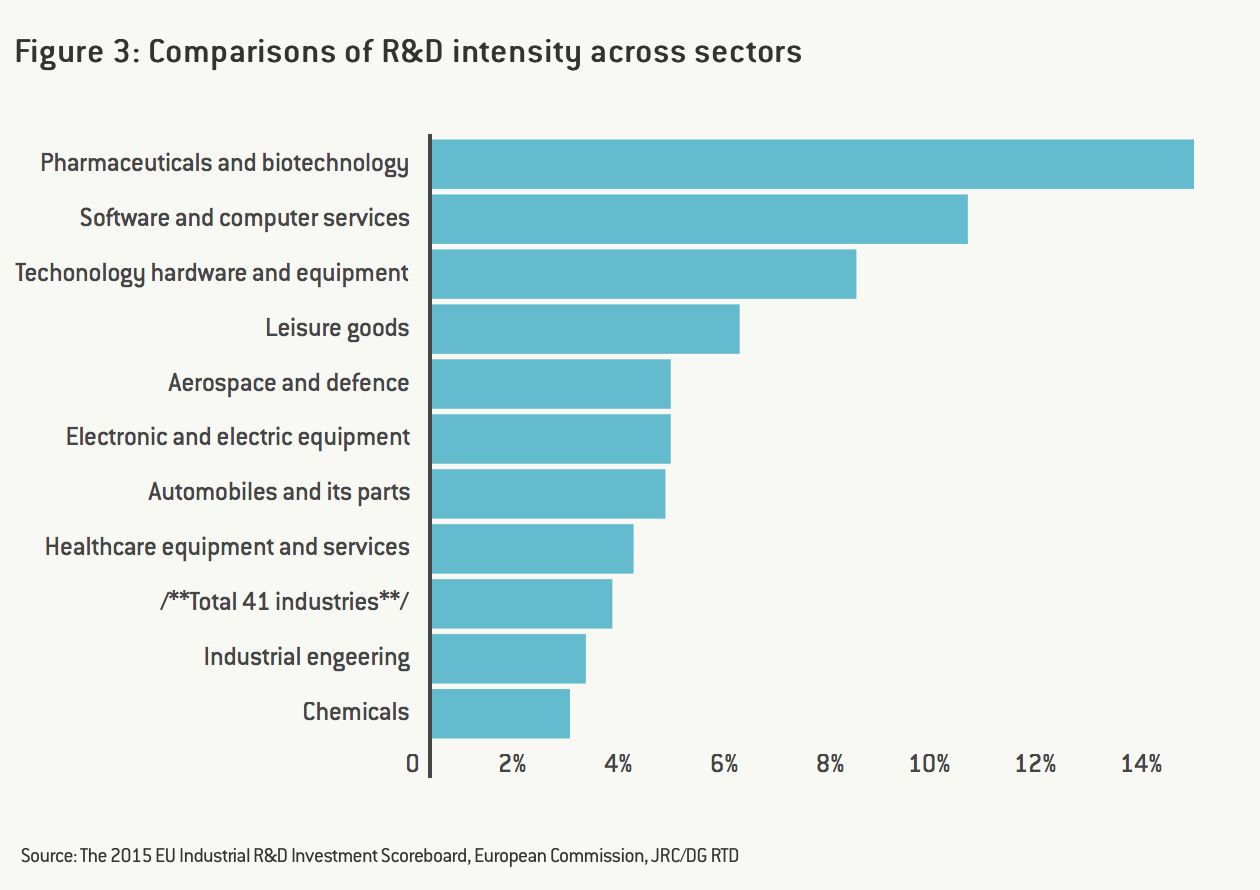 Within the pharmaceutical industry, UK has long been a center for research and development (R&D) activities. In 2015, it contributed approximately 20% of the EU’s total R&D, only slightly lower than Germany and France. As Maria Demertzis and Enrico Nano highlight, these research and development activities rely on two key factors: skilled labour supply and research funding. Both factors could be at risk in the post-Brexit era. For the former, the UK has attracted a large number of skilled workers from abroad, most of which are EU citizens. For the latter, the UK gains more research funding in the current system than any other country. Therefore, Brexit could undoubtedly have a negative impact for both factors in the pharmacy industry.