By Daniel Gros, Director of the Centre for European Policy Studies, Brussels. Originally published at VoxEU

Trade and international financial transactions have grown massively in recent decades. This phenomenon, also called globalization, is often described as a ‘mega-trend’. Business and political leaders never tire of repeating that ‘globalization’ is the future, that it delivers more jobs and higher incomes. However, more recently globalization seems to be in retreat—in 2015 trade actually fell, both in absolute terms and relative to GDP. Does this mean globalization has gone into reverse (OECD 2016, IMF 2015, 2016)?

In this column, I argue that the slogan ‘globalization equals growth’ is wrong. There is no general economic theorem that links more trade to growth and other economic benefits. Economic theory implies only that, under most circumstances, lower trade barriers will lead to more trade and more jobs. The simplification, that more trade is thus always beneficial, is not warranted. If trade increases for reasons other than the lowering of trade barriers, it is far from clear that this will benefit everybody.

The distinction between globalization driven by lower trade barriers and increases in trade driven by other factors is not just an academic point. It is the key to understanding why globalization has become so unpopular in most advanced countries, and why the recent slowdown in trade is not something to worry about.

The massive increase in trade flows over the last two decades has always been difficult to explain with ‘classic’ causes, such as trade liberalisation lowering trade costs. Tariffs (and other trade barriers) had of course been reduced radically in several stages in the 1960s, 70s, and 80s. However, by the late 1990s the remaining tariffs were already rather low; and many non-tariff barriers (such as the Multi Fibre Arrangement, which had seriously limited trade in textiles) had also been eliminated.1

Transport costs of course fell with containerisation, but this improvement had yielded most of its benefits by the late 1990s. Estimates of the overall cost of trade based on the ratio of CIF prices (which incorporate transport costs) and FoB prices (which do not) actually suggest that transport costs slightly increased over the last 20 years; before1995 they had fallen almost continuously (Baldwin and Taglioni 2004). Figure 1 shows that transport costs have fallen again very recently, but that this coincided with a slowdown of trade – the opposite of what one would expect. 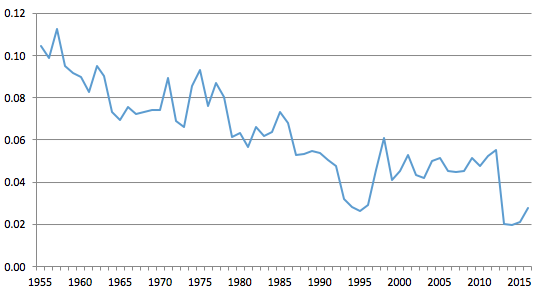 How can one reconcile ‘hyper-globalization’ (Subramanian and Kessler 2013) with stagnating tariffs and transport costs? Baldwin (2017) provides one answer. He argues that the key driver of globalization today is the falling price of ‘transporting’ ideas, as opposed to the cost of moving goods.

This contribution provides an additional, maybe complementary, explanation—higher oil (and other commodity) prices increase both trade volumes and transport costs for goods, but not ideas. The impact of oil prices on transport costs is clear—fuel is an important element of overall transport costs. A sharp increase in fuel prices can more than outweigh, at least in the short to medium run, the costs savings due to containerisation. (Cosar and Demir 2017 also argue that most of the cost savings from the latter have been realised.)

But the key point is that higher commodity prices also automatically create more trade, because commodities constitute a large fraction of global trade.

Assume that one tonne of steel and ten barrels of oil are needed to produce one car. In 2002-03, that bundle of raw materials was worth around $800, or about 5% of the value of a car priced at $16,000. This implies that during the early 2000s, industrialised countries had to export five cars for imports of 100 bundles of these raw materials. By 2012–13, the value of the raw materials needed for one car increased to about $2,000, now representing about 10% of the cost of a car (prices of cars had gone up much less). Industrialised countries thus had to export 10 cars, double the previous quantity, for the same amount of raw material imports.

An immediate objection to this example is that it looks at the value of trade, but one also finds that over the last decades the growth of trade in volume has exceeded that of the volume of real growth. However, this excess growth in trade volume also follows in this example—an industrialised country would need to double its exports in volume just to pay for an unchanged volume of raw material imports.

Since food, fuels, and raw materials make up about a quarter of global trade, the huge price movements in raw materials, especially energy, over the last few decades, must have had a big impact on aggregate trade figures. The run up in commodity, and especially crude oil, prices until about 2014 drove hyper-globalization, and the fall in prices since then has now reduced globalization. There is thus little need to look for other explanations for the recent slowdown in trade.

Figure 2 illustrates this phenomenon with three lines, each of which show three variants of the global trade/GDP ratio. The top-most line is just the ratio of total global exports to global GDP. It is the one that shows most globalization—trade accounted for a little over 15% of GDP in 1995, but 25% at the peak in 2007 (an increase of almost 10 percentage points).

The middle line shows global exports of manufacturing goods as a percentage of GDP. The difference to the first line is, of course, trade in raw materials, which increased in value along with their prices, as argued above. Trade in manufacturing goods shows much less globalization, having increased from only 13% to 17.5% of global GDP.

The lowest line takes into account the fact that higher raw material prices also means that industrialised countries have to export more manufacturing goods to pay for their more expensive raw material imports. This last line, which could be called ‘manufacturing trade net of payment for raw materials’ shows even less globalization, with the ratio relative to GDP going from 10.5% to 13.6% of global GDP (an increase of only 3 percentage points, one third of the headline increase mentioned above).

Figure 2 World trade as a percentage of GDP 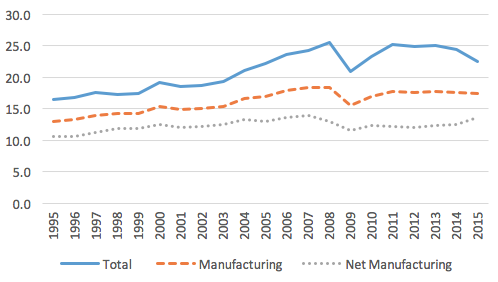 Source: Own calculations based on OECD and WTO data.

This decomposition of trade flows suggests that there has indeed been some globalization, but it has been much less strong than the hyper-globalization one sees in the aggregate data. Moreover, the recent fall in commodity prices can fully explain the fall in trade since 2014 with trade in ‘net manufacturing’ showing no ‘de-globalization’.

But back during the heyday of hyper-globalization, no responsible politician dared to explain that globalization driven by higher commodity prices would have different implications (for advanced economies) than globalization driven by trade liberalisation—this new globalization meant lower living standards in advanced countries as higher commodity prices diminished the purchasing power for OECD workers. The widespread popular disenchantment with globalization can thus be easily explained—workers in Europe and the US were told that more trade would make everybody better off. But in reality there was no ‘surplus’ to be distributed, and workers just noticed a decline in their living standards.2

But hype and exaggeration are sure ways to bring a valid cause into disrepute. This is what has happened to globalization. The decades of gradual liberalisation of trade and capital flows that followed post-war reconstruction fostered a resumption of global trade that was hugely beneficial. However, at exactly the point when economic analysis would suggest that these gains from trading more freely were largely exhausted, actual trade accelerated. This surge in trade was driven largely by higher commodity prices and could not deliver higher living standards for workers in industrialised countries.

A popular backlash was thus unavoidable and Donald Trump became its standard bearer. The political consequences in Europe are also visible—the Brexit referendum, the difficulties in ratifying the free trade agreement between the EU and Canada (CETA) and the stand-still in the negotiations on the Transatlantic Trade and Investment Partnership (TTIP) between the EU and the US are all expressions of this disenchantment with globalization.

What Could Be Done to Avoid Throwing the Baby Out With the Bath Water?

A first step would be to stop the overselling. CETA and TTIP would be useful to have, but the economic benefits can only be of second order importance (and the potential damage feared by some as well). A second step would be to look where there are still trade barriers whose removal could bring significant welfare benefits. They are likely to be found in emerging markets, whose tariffs and non-tariff barriers are still several times higher than those of the EU or the US. European trade policy should thus concentrate on free trade deals with India or China, rather than the US.