Yves here. Notice how these Universal Basic Income programs don’t even necessarily alleviate poverty. And none of these critiques pointed out the big shortcoming that was exposed with the Speenhamland system (see here for a longer explanation): that it suppressed wages and wound up being in large measure a subsidy to employers.

By Silvia Merler, an Affiliate Fellow at Bruegel. Previously, she worked as Economic Analyst in DG Economic and Financial Affairs of the European Commission. Originally published at Bruegel

What’s at stake: the concept of a Universal Basic Income (UBI), an unconditional transfer paid to each individual, was prominent earlier this year when Finland announced a pilot project. It’s now back in the discussion as the OECD published a report illustrating costs and distributional implications for selected countries. We review the most recent contributions on this topic.

The OECD recently published a policy brief and a methodological note looking into the cost and benefits of adopting Basic Income (BI) as a policy option. The simplest way of introducing a BI would be to take existing cash benefits paid to those of working age and to spread total expenditure on these benefits equally across all those aged below normal retirement age. The resulting BI amount would be very much lower than the poverty line for a single individual. Therefore, without any additional taxes, a budget-neutral BI will be very far from eradicating poverty. 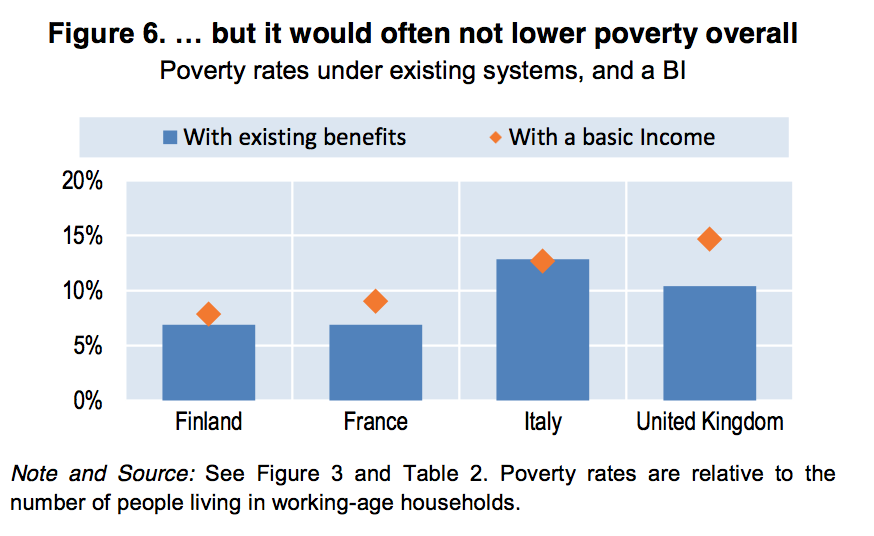 A perhaps less ambitious alternative may be to use the levels of guaranteed minimum-income benefits (GMI) in existing social protection system as an initial target value for a BI. However, many individuals receive benefits other than a GMI to pay for additional costs for specific needs that they have and they would lose out even more from a flat-rate BI. So it would be likely desirable to retain some targeted cash transfers, but this would require even greater reductions of BI amounts if expenditures are to be kept at current levels. Thus a BI at socially and politically meaningful levels would likely require additional benefit expenditures, and thus higher tax revenues to finance them.

The OECD  simulations for four countries (Finland, France, Italy and the UK) show that although a universal basic income is simple, existing benefits are not, and replacing them with a single flat rate benefit produces complex patterns of gains and losses. Those receiving social insurance benefits would normally lose out from the replacement of those with a universal basic income at GMI levels. Those not qualifying from any social benefit under existing policies would benefit as long as the increase in benefits exceeds the corresponding increase in their taxes. Lower-income households are more likely to receive means-tested income support so they are actually less likely to gain from a BI set at a similar level to GMl. 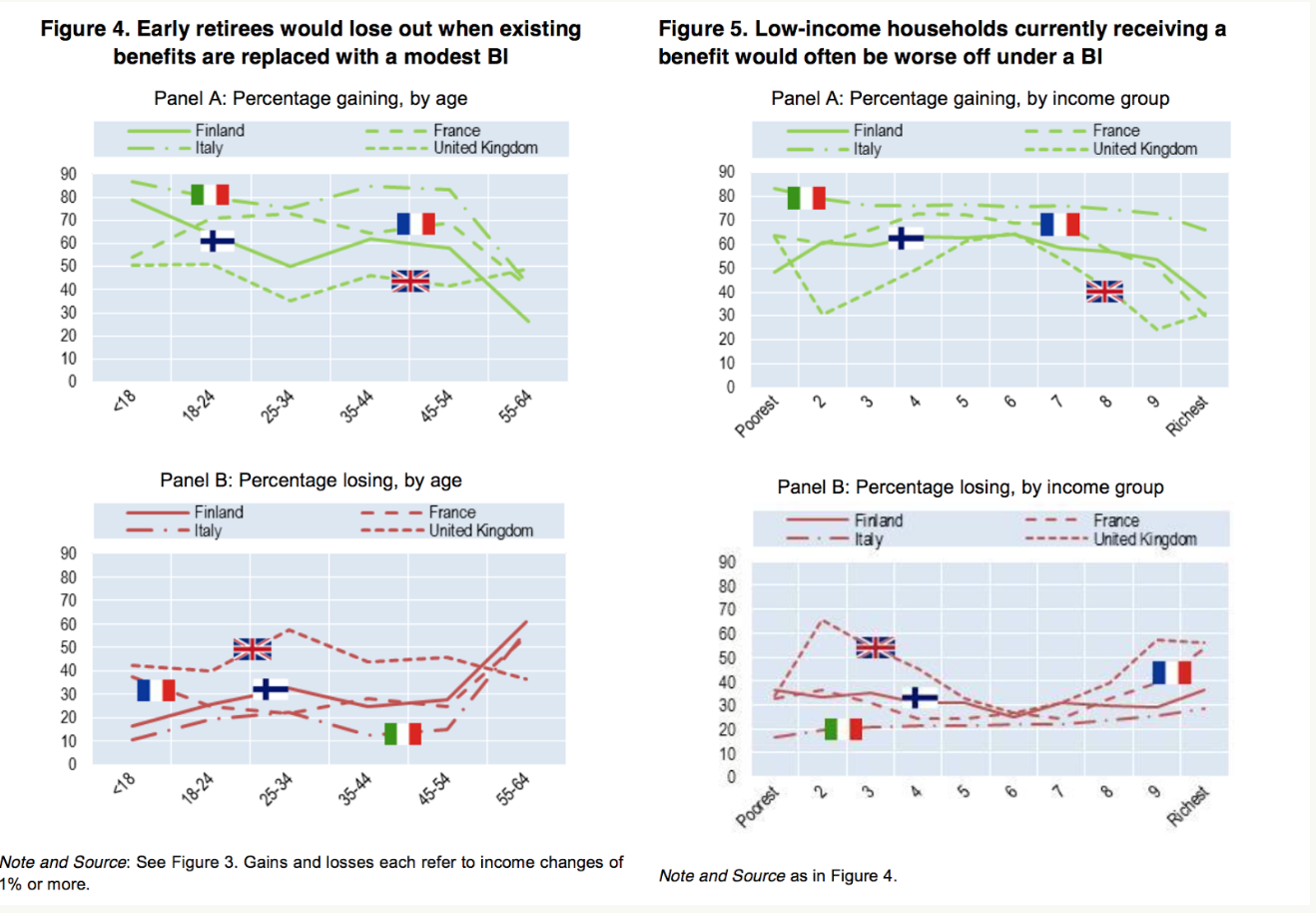 Robert Greenstein at the Centre on Budget and Policy Priorities looked specifically at the case of the US, for which Charles Murray proposed that every citizen age 21 and older could get a $13,000 annual grant deposited electronically into a bank account in monthly installments, $3000 of which should be used for health insurance, leaving every adult with $10,000 in disposable annual income for the rest of their lives. Greenstein points out that with over 300 million Americans today, an UBI of $10,000 a year would cost more than $3 trillion a year. This single-year figure equals more than three-fourths of the entire yearly federal budget and it’s also equal to close to 100 percent of all tax revenue the federal government collects. UBI’s financing challenges raise fundamental questions about its political feasibility, both now and in coming decades. UBI’s supporters generally propose UBI as a replacement for the current “welfare state”, which may  increase poverty and inequality rather than reduce them. Some UBI proponents may argue that by ending current programs, we would reap large administrative savings that we could convert into UBI payments. But Greenstein thinks that’s mistaken because the major means-tested programs – SNAP, Medicaid, the EITC, housing vouchers, Supplemental Security Income (SSI), and school meals – administrative costs consume only 1 to 9 percent of program resources, and their funding goes overwhelmingly to boost the incomes and purchasing power of low-income families.

Berk Ozler at the World Bank refers to a paper by van de Walle, Ravallion and Brown, who examine the best methods available for targeting poor people to see how they would fare in reducing poverty. The policies evaluated include a universal basic income, targeting on the basis of basic proxy-means tests (PMT), improvements to PMT they propose, and some simple categorical targeting options (such as targeting the elderly, children, widows, etc.). They find that these would reduce poverty by less than 25% depending on the choice of poverty measure. Universal Basic Income (UBI) would reduce the Headcount Index by 14.5 percent. Categorical targeting performs very similarly to UBI. They do significantly better when caring about distribution-sensitive measures of poverty (43 percent reduction in the Poverty Gap) – but only assuming an improvement upon the common PMT methods by using poverty quantile regressions or means from panel data when available. The difference between the performance of UBI and the best targeting method looks small. But that is a little deceiving: in a country of 25 million people, such as Cameroon, reducing the Headcount Index from 17.1% to 15.4% allows close to half a million people escape poverty.

Shanta Devarajan offers three reasons in favour of a Universal Basic Incomes. First, efficient use of natural-resource rents. Most of the oil-rich countries in sub-Saharan Africa suffer from poor public-spending outcomes. One reason is that oil revenues go directly to the government without passing through the hands of the citizens. If the oil revenues were transferred directly to citizens, with government having to tax them to finance public spending, citizens would know the magnitude of oil revenues and they would have a greater incentive to monitor how their tax money is being spent. Even without these changes, a simple transfer of 10 percent of oil revenues could effectively eliminate poverty in several oil-exporting countries.

Second, improving the welfare of the poor. Replacing inefficient subsidies with cash transfers would ensure at the very least that the poor are getting the intended monetary benefit. But it could also be empowering. Targeting would be preferable in principle, but in practice there are so many problems in identifying the poor that a universal scheme may do just as well. Third, adjusting to labour-saving technologies. The dilemma is that with these technologies productivity will increase but many people will lose their jobs. Managing this transition is difficult from an economic, political, and moral viewpoint. A system where part of the increase in productivity is taxed, and then distributed as cash transfers to all citizens, whether they are working or not, could help resolve some of the tension.

Rick McGahey at INET says the UBI debate should focus on the long-term weakening of labour’s bargaining power. Much of the current interest in UBI stems from a belief that technology is eliminating jobs more rapidly than new ones can be created, and that future job growth will be much lower. McGahery argues that the assumption that technology will be so disruptive as to justify discarding existing welfare state and other labour market institutions for a UBI should be treated with caution. Politically, that could result in an alliance with libertarian advocates of a UBI who want to eliminate the welfare state and use the funds to provide cash grants to individuals, with the ultimate goal of reducing public spending. Instead, the UBI debate should focus on the strengthening of business’ economic power over labour over a more than three-decade period.  Rather than a historically unique event, advanced technology may just be the latest factor impeding labour’s ability to bargain by contributing to weaker demand and growing inequality.

Nathan Keeble at Mises Wire argues that UBI would not create incentive to work, help solve unemployment, or alleviate poverty, and it could turn out to be worse in the long run than traditional, means-tested welfare systems. First, UBI does not eliminate the disincentives to work that are inherent in welfare programs; it simply moves them around as this program must be financed, and any welfare system, including the UBI, is necessarily a wealth redistribution scheme.The progressive taxation that is necessary to finance a UBI means that the more a person earns, the higher percentage of their wealth will be taken from them. The work disincentives are therefore still very much present in the tax system. They’ve simply been transferred onto different, higher income groups of people. Moreover – Keeble argues – UBI diminishes the power of consumers in directing the marketplace, as it would subsidize non-productive activities.

Bryan Capland and Ed Dolan had a long exchange earlier this year, on how libertarians should see UBI. Capland first argued that while dropping multi-faceted means-testing that characterises other types of social spending would reduce moral hazard, it would also greatly increase the number of eligible recipients. He declared himself “baffled that anyone with libertarian sympathies takes the UBI seriously”, because the welfare state is already unsustainable, largely because our means-testing by age and health isn’t stringent enough. Doland took on the challenge and offered a taxonomy of three kinds of libertarians who might take a UBI very seriously, arguing that UBI could very well be a policy for pragmatic critics of well-intentioned but ineffective government, for classical liberals, and for advocates of personal freedom.