Yves here. Waiting for Seriously Bad Stuff to start happening in China has long had a Waiting for Godot quality to it. But no large-ish export and investment led economy has made a crisis-free transition from that model to being consumption led. And China’s continued use of debt to keep its current model going says it hasn’t figured out a was to facilitate an economic restructuring of the needed magnitude. On top of that, the growth-dampening impact of its one-child policy is going to start to bite soon.

Fairfax’s Matt Wade is the latest to warn on China’s debt time bomb:

For some years now China’s economic growth has been underpinned by an explosion in corporate lending. China has accounted for half – yes half – of all new credit created globally since 2005 according to the New York Federal Reserve. That’s a huge share for an economy that now only accounts for about 15 per cent of the global economy.

Alarm bells rang last August when the International Monetary Fund pointed out the trajectory of credit growth in China was eerily similar to countries that experienced painful post-debt boom adjustments in the recent past. This includes Japan in the 1980s, Thailand prior to Asian Financial Crisis and Spain prior to the European debt crisis.

The sheer pace of lending growth makes it likely many loans are going to marginal borrowers or unviable projects. A recent Oxford University study that evaluated 65 major road and rail projects in China concluded just 28 per cent could be considered “genuinely economically productive”.

The best outcome is for what economists call a soft landing. Under this scenario Chinese authorities would accelerate reforms, somehow scale back credit growth and clean up bad debts while economic growth keeps humming along at a healthy rate…

But as economist George Magnus, an associate at Oxford University’s China Centre, says “you can’t resolve a debt problem peacefully”.

…slower Chinese growth… would hit Australia in two ways, first by reducing the price of the commodities we export but also by reducing Chinese demand for Australian goods and services.

To put China’s debt build-up into perspective, here’s a summary chart using data from the Bank for International Settlements: 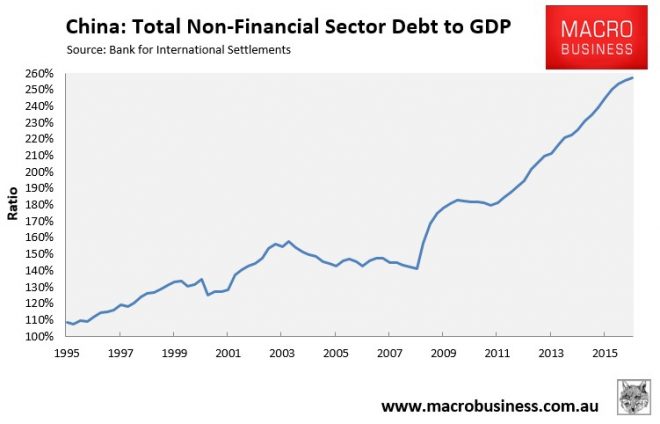 Note the explosion in Chinese non-financial sector debt over the past decade.

If Xi Jinping’s poliburo takes another crack at reform then Chinese growth could really slow and the bad loans could turn unruly.