Yves here. So having economists try to create groaf is less important to growth than commonsensical things like staying out of war, avoiding pestilence if you can, and preventing financial crises.

By Stephen Broadberry, Professor of Economic History, Oxford University and John Joseph Wallis, Professor in the Department of Economics, University of Maryland. Originally published at VoxEU

Most analysis of long-run economic performance abstracts from short-run fluctuations and seeks to explain improved performance through an increase in the rate of growth. Using data on annual rates of change of per capita income reaching back to the 13th century for some countries, this column show that improved long-run performance has actually occurred primarily through a decline in the rate and frequency of shrinking. Structural change, technological change, demographic change and the changing incidence of warfare offer at best a partial explanation; a full understanding requires a consideration of institutional change.

To date, most work on long-run economic performance has focused on ‘growing’, but recent work for the post-1950 period has suggested that economies vary as least as much in how they ‘shrink’ as in how they grow (Easterly et al. 1993). However, despite these findings on the volatility of GDP per capita in poor countries, there has been little research into why poor societies shrink so often or by so much. Furthermore, economic historians have not systematically investigated the possibility that improved long-run economic performance since the 18th century could have been due to less shrinking rather than faster growing, despite the widespread acceptance of the idea that living standards improved slowly by modern standards during the Industrial Revolution. In new research, we show that to understand economic performance over the long run, economic historians, growth economists, and development specialists need to explain a reduction in the rate and frequency of shrinking rather than an increase in the rate of growing (Broadberry and Wallis 2017).

Empirical Evidence on the Importance of Shrinking

Economic performance over time is the aggregation of short-run changes measured at the annual level. We make use of an identity to decompose long-run economic performance into the contributions of growing and shrinking. The contribution of growing is the frequency with which an economy grows multiplied by the (positive) rate at which it grows when growing (the growing rate). The contribution of shrinking is the frequency with which an economy shrinks multiplied by the (negative) rate at which it grows when shrinking (the shrinking rate). In three data sets covering the period from the 13th century to the present, we show that better long-run economic performance has generally occurred not so much because of an increase in the rate of growing, but more because of a decrease in the frequency and rate of shrinking.

Table 1, derived from the Penn World Table, sets out information on the performance of 141 countries over the period 1950-2011, broken down by level of income. The first column shows that the economies with per capita incomes above $5,000 in 2011 all saw similar net rates of change of per capita income over this period, while the poorer economies, particularly those with incomes below $2,000, saw much lower net rates of change. However, we can see from the second column that this was not because they grew slowly when growing. Indeed, the average growing rate for the poorest economies was actually higher than for the richest economies. What made the difference was the rate and frequency of shrinking: the average shrinking rate was much higher in the poorer economies than in the richest, while the frequency of shrinking was much greater in the poorest economies.

Economic Performance in the 19th and 20th Centuries

A similar analysis can be conducted for 14 European and 4 New World economies, derived from the Maddison (2010) database, and covering the period 1820-2008, broken down into four sub-periods. The first column of Table 2 shows that the annual net rate of change of per capita income increased from 1.40% during 1820-1870 to 2.55% during 1950-2008. Perhaps surprisingly at first sight, the second column shows that this was not caused by an increase in the average growing rate, which actually fell from 3.88% during 1820-1870 to 3.06% during 1950-2008. The reason for the improved economic performance can be seen in the third and fourth columns: a substantial fall in the average shrinking rate from -3.04% to -1.23%, combined with a fall in the frequency of shrinking from 34% of years to just 12%.

Table 2 Average rate of change of per capita income in all years, growing years and shrinking years, 18 European and New World countries, 1820-2008

Economic Performance Back to the 13th Century

Figure 1 plots the annual time series of per capita GDP for four European economies over the period 1270-1870. For Italy and Spain, there was a clear alternation of periods of positive and negative trend growth over periods of a decade or more, with growth booms typically followed by growth reversals, leaving little or no progress in the level of per capita incomes over the long run. Per capita GDP therefore fluctuated without a long-run trend before the mid-19th century. For the cases of Britain and the Netherlands, although there were alternating periods of positive and negative growth until the 18th century, there was also a clear upward trend over the long run, with the gains following the Black Death being retained, and the growth reversals eventually disappearing with the transition to modern economic growth in the eighteenth century. As periods of negative growth became less frequent and as the rate of shrinking decreased in northwestern Europe, Britain and Holland overtook Italy and Spain. 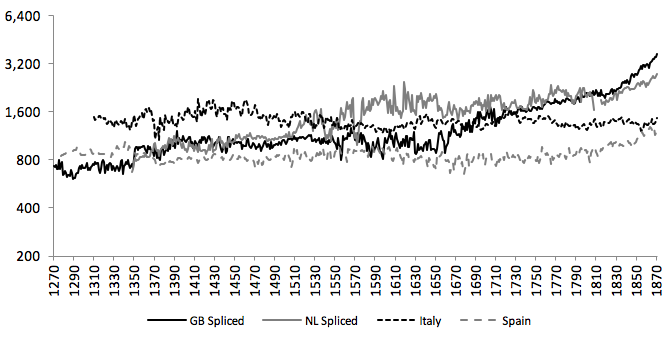 Decomposing long-run economic performance into the contributions of growing and shrinking in this long-run data set yields similar results to those obtained in Tables 1 and 2. The improvement of long-run economic performance in Britain and the Netherlands, as they overtook Italy and Spain and made the transition to modern economic growth, occurred despite a reduction in the average growing rate. The improved performance was the result of reductions in both the frequency and the average rate of shrinking.

Explaining Why Some Economies Shrink More

These empirical results suggest two social patterns. One pattern is societies with high growing rates, high shrinking rates, and high shrinking frequencies, resulting in less, little, or no growth over the long term. This pattern has dominated human history for the last 10,000 years. The other pattern is societies with low growing rates, low shrinking rates, and low shrinking frequencies, resulting in slow but steady growth over the long term. This second pattern appeared only after 1700, and then only in a handful of societies.

Historically it is too soon to tell whether the low growing, low shrinking, positive growth long-term pattern will persist. But the high growing, high shrinking, little or no long-term growth has persisted for at least as long as we have data. There is little doubt that the pattern has repeated itself with variations through time. The obvious question is: can we find corollary patterns in the historical record?

We consider four possible proximate factors: (1) structural change from an agricultural sector dependent on the vicissitudes of the weather to a more stable service sector; (2) technological change, transforming downturns from an absolute decline in output to a slower rate of positive growth; (3) demographic change with fertility control leading to the avoidance of over-population and diminishing returns; and (4) the changing incidence of warfare, with a more peaceful environment reducing disruption to trade and output. But taken together, these proximate factors do not provide a full explanation, since factors such as structural change, technological progress, and demographic transition are themselves usually seen as part of the process of development rather than ultimate causes such as institutional change.

We know that in a crude correlation sense, the institutional structure of societies in the high growing, high shrinking pattern differs predictably from the institutions in the low growing, low shrinking pattern. For obvious reasons, efforts to understand the relationships between institutions and growth have focused on the effects of institutions on the productivity of the economy. In general, more secure property rights, the rule of law and clear unbiased enforcement of commercial contracts, a modicum of civil liberties, and personal security clearly contribute to economic productivity through investments in physical and human capital, and through the size and scope of markets. However, if these institutional structures produce such good economic outcomes, it is important to ask why all societies do not possess them.

North Wallis and Weingast (2009) analysed how societies create and sustain social order, with important implications for the nature of rules. In a world where violence is endemic, powerful individuals and organisations have an incentive to enhance social order. To reach credible agreements to limit violence, powerful actors have to believe that other powerful actors will honour commitments not to use violence. Coalitions of powerful organisations manipulate economic privileges to create rents. To the extent that those rents are adversely affected by violence, powerful individuals and organisations have a credible incentive to honour their agreements not to use violence. Those agreements operate within narrow ranges of circumstances, of course. Outside of those ranges, agreements break down and economies shrink. North Wallis and Weingast call this the logic of the “natural state.”

The nature of the agreements between powerful actors that support social order in a natural state paradoxically makes it very difficult, if not impossible, for those powerful actors to commit to rules that treat everyone the same. The rules have to recognise the privileges of powerful elites, and one of these privileges is that the rules apply differently to elites, and differently to different elites. The rules that emerge in a natural state, therefore, are ‘identity rules’ whose form and enforcement differ according to the organisational identity of the individuals.

These features of identity are not flaws in the institutional structure of natural states, rather they are an inherent part of how these societies work. While identity rules may persist, they are essentially a solution to short-run problems that exacerbate long-run instability. Identity rules treat different elites differently, and therefore as elite identities change over time, how the rules apply will differ among elites. When circumstances change sufficiently, existing institutional agreements cannot solve the problem of intra-elite coordination. The result is disorder and violence, which leads in turn to shrinking. The process is much more complicated and nuanced, but the key point is that identity rules promote short-run solutions to elite conflict, yet result in long run instability.

The ‘good’ institutional rules in the developed world are enforced impersonally, i.e. they apply equally to all citizens (ideally). Impersonal enforcement of these rules means that elite agreements based on the availability of the rules do not depend on identity and the arrangements are inherently less fragile. The incentives for higher investment and effort provided by these institutional rules are an important source of growth. However, it appears from the quantitative historical record that the effect of these institutional rules on fragility and the proclivity for shrinking matters more than their direct effects on productivity.