Yves here. Notice that Russia is close to being an autarky and the sanctions appear only to have made it more so. Ooops.

If your enemy is waging economic war on you, it’s prudent to camouflage how well your farms and factories are doing. Better the attacker thinks you’re on your last legs, and are too exhausted to fight back.  A new report on the Russian economy, published by Jon Hellevig, reveals the folly in the enemy’s calculation.

Who is the audience for this message? US and NATO warfighters against Russia can summon up more will if they think Russia is in retreat than if they must calculate the cost in their own blood and treasure if the Russians strike back.  That’s Russian policy on the Syrian front, where professional soldiers are in charge.   On the home front, where the civilians call the shots,  Hellevig’s message looks like an encouragement for fight-back – the economic policymaker’s equivalent of a no-fly zone for the US and European Union.  It’s also a challenge to the Kremlin policy of appeasement.

Hellevig (right), a Finnish lawyer and investment analyst,  has been directing businesses in Russia

since 1992. His Moscow-based consultancy Awara has published its assessment of Russian economic performance since 2014 with the title, “What Does Not Kill You Makes You Stronger.” The maxim was first coined by the `19th century German philosopher Friedrich Nietzsche. He said it in a pep talk for himself. Subsequent readers think of the maxim as an irony.  Knowing now what Nietzsche knew about his own prognosis but kept secret at the time,  he did too.

Hellevig’s report can be read in full here.

The headline findings aren’t news to the Kremlin. It has been regularly making the claims at President Vladimir Putin’s semi-annual national talk shows;  at businessmen’s conventions like the St. Petersburg International Economic Forum (SPIEF);  and in Kremlin-funded propaganda -– lowbrow  outlets like Russia Today and  Sputnik News, and the highbrow Valdai Club. A charter for a brand-new outlet for the claims, the Russian National Convention Bureau, was agreed at the St. Petersburg forum last month. Government promotion of reciprocal trade and inward investment isn’t exceptional for Russia; it is normal practice  throughout the world.

The argument of the Hellevig report is that the US and NATO campaign against Russia has failed to do the damage it was aimed to do, and that their propaganda outlets, media and think-tanks are lying to conceal the failure. Small percentage numbers for the decline in Russian GDP and related measures are summed up by Hellevig as “belt-tightening, not much more”.  Logically and arithmetically, similarly small numbers in the measurement of the Russian recovery this year ought to mean “belt expanding, not much more.” But like Nietzsche, Hellevig is more optimistic. Here’s what he concludes: 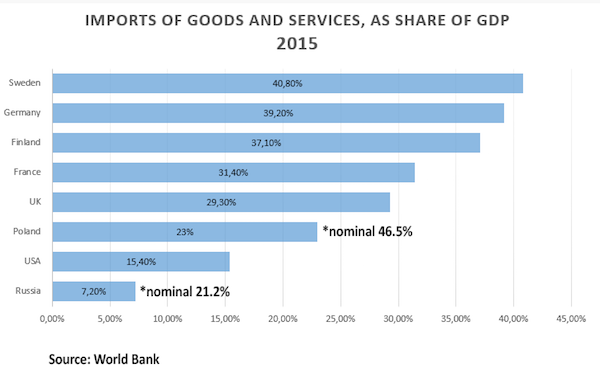 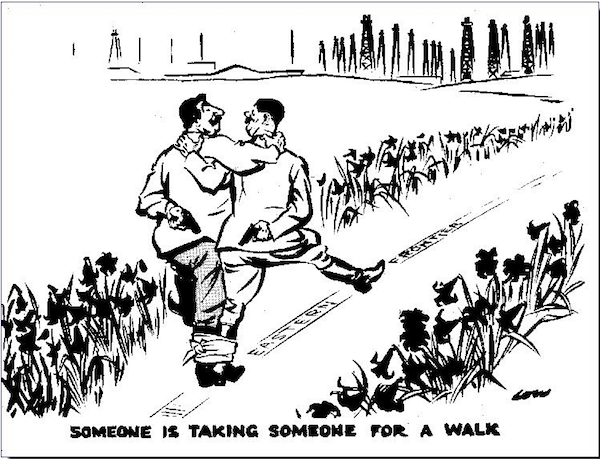 David Low’s cartoon in the London Evening Standard of October 31, 1939, two months after the Soviet-German Non-Aggression Pact was signed, and after Poland was invaded. Germany is now tied by the US and NATO to the Ukraine, and the guns are drawn openly. Not even guarded rapprochement between Germany and Russia is possible; there is no significant political support for it among German voters.

Hellevig’s point deserves repeating — the Russian economy is far more diversified than the enemy thinks. Naturally, that makes Russian targets less vulnerable, but doesn’t deter the enemy from intensifying his attack.  The enemy isn’t as simple-minded as his own propaganda sounds.

A glance at the way in which the Moscow stock exchange index (MICEX) has been moving in relation to the movement of the Brent marker price for crude oil illustrates how the markets, Russian and international,  think. The chart shows positive sentiment for the future of the Russian economy cut its tie to the value of exported energy between November of 2014 and January 2015. Since then the market assessment looks like it has been more aligned with Hellevig than with Washington.

That’s not what the chart lines mean, according to major institutional investors.  They believe the crossover occurred when Donald Trump won the presidential election on November 8; the gap between share price and oil price opened on market optimism that he would order the lifting of  sanctions and other warfare measures.  Once Trump took the oath of office on January 20, and the oil price started to rise, the lines converged.

Hellevig warns against illusions.  “Russia must understand that the Russia containment strategy of the West will be there for years to come, and will only disappear the day when they gather the courage to understand that Russia has overcome. Therefore, Russia must root all its economic strategy and development efforts in a firm understanding of this reality, and never to count on West in anything. Russia must, focus on China, the East, and the rest of the world.”

In war, feats of courage, while awarded medals after the event, are usually irrationally motivated when they happen.  Instead of courage to understand,  Hellevig may mean something more like cost-benefit analysis, as performed in the minds of voters. When American or European voters calculate that war against Russia is threatening their interests, then there may be a change  in the war policy towards Russia. For US voters to turn against war, war must hurt.

Who does Hellevig think, from Putin on down, believes these things, or is even willing to consider the case for them?

Sergei Glazyev is obvious, but he is window-dressing in the Kremlin wall. Not one of his policy recommendations has been adopted, nor even endorsed in public by the president; for details, click to open. Instead, Glazyev is treated to public dressing-downs from Putin’s spokesman, Dmity Peskov. Glazyev, to be sure, is a prickly, vain character with a voice pitch that compares unfavourably to chalk across a blackboard.   Those are not disqualifications for his ideas. 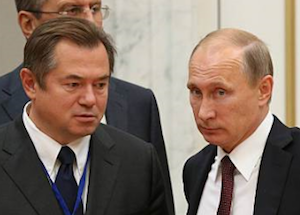 In his latest presentation on the economy, Putin sounded all of Hellevig’s findings, with the exception of the imports-to-GDP ratio and surpassing Germany.  However, Putin committed to none of Hellevig’s recommendations. For the full text of the president’s June 15 “Direct Line” broadcast, read this.  Addressing the criticism of Central Bank interest rate policy – the only Russian target Hellevig explicitly attacks — Putin agreed with the critics; he also agreed with the Central Bank.

“I very much hope that the Central Bank continues to move cautiously towards reducing the key interest rate,” Putin started. So who else is Hellewig addressing with the new report? The regrettable answer is noone in particular. Russia’s enemies are in for a long war, Hellevig acknowledges himself.  US Congress action to finalize the new sanctions bill may come this month, even before the August summer recess; for details of the new Russian targets and US weapons to be deployed, according to the new statute,  read this.  A veto by President Trump is unlikely because there are two-thirds majorities in the Senate and House of Representatives to override.

So Hellevig’s “What Doesn’t Kill You” is a report in a vacuum unless it is convincing in the domestic producers’ market, and in foreign investor markets.

Sentiment for the future of the Russian economy is measurable in what Russians with cash and capital say they plan to do. If they are producing, shipping, buying and selling more,  that will show in growth rates for electricity consumption, cargo tonnage moved on railroads, and the flow of cash and capital goods inward and outward.  The latest measures of the electricity and rail indicators show single-digit growth upon the depressed base numbers prevailing last year. However, the numbers for capital outflow, including Russian businessmen on the run, are also growing.  The closer you get to the individuals who are moving their cash abroad, the less confidence in the future you hear.

From the regular monthly polling of confidence in the future on the part of Russian businesses, it’s clear there is less optimism than Hellevig’s:  the score last month remained negative, as it had been in April and May. The minus-1 score wasn’t as bad as last December, but at minus-8 even that was nowhere near as bad as the all-time low in measured Russian business confidence – minus-20 in 2008. For more details, read this.

The sentiment of foreign investors should be estimated differently.  The long money goes into Russian debt; the short or hot money is in Russian equity. Normally, they move in parallel. But for confidence in Russian bonds and confidence in Russian shares, the trend lines this year have been running in opposite directions. By the end of June, foreign buying of Russian debt issues rose sharply, compared to April and May, with an aggregate of $2.8 billion invested last month.  For shares the situation has been the reverse. Funds holding Russian shares have been selling steadily for the past four months, and $1.6 billion has been withdrawn over this period, according to EPFR Global.