Yves here. While this article gives a very good high-level summary about how inequality is becoming institutionalized in American and the costs to those who see themselves as having lost the most, I wonder about the emphasis on hope as a remedy. Perhaps this is such a strong cultural bias in the US that there’s no escaping it as a motivator for most people. But I take to heart the interpretation of the Pandora’s Box myth that Hope being at the bottom of the box of all the evils she let loose was not a show of mercy by the gods, but simply a torment in disguise.

It’s not hard to imagine that the psychological damage done by loss of mobility and the relative status decline of lower-middle class individuals, particularly in rural areas, is made worse by media. Not only does TV show how the better-off half lives, TV and the movies regularly depict characters living in better circumstances than the incomes that go with their jobs would allow. One reason is that it’s almost impossible to shoot a scene in anything smaller than a pretty big room, so Americans (outside those meant to be upper class) in movies and TV look better housed than they generally would be in their real lives. And of course they all have great teeth.

By Carol Graham, Leo Pasvolsky Senior at the Brookings Institution and College Park Professor in the School of Public Policy at the University of Maryland. Originally published at VoxEU

Despite the long-held belief that high levels of inequality in the US signal future opportunity, a number of studies suggest that this is no longer the reality. This column examines trends in inequality from the perspective of well-being and focuses on non-economic aspects of welfare, including hope. The results reveal stark differences across people, races, and places in the US. Poor minorities – and blacks in particular – are much more hopeful than poor whites, while urban places are more hopeful than are rural ones, as are places with higher levels of diversity.

The US is as divided as it has ever been. The simplest marker – which has been a topic of discussion among economists for many years – is the stark increase in inequality of both income and opportunity. A number of studies provide compelling evidence that despite the long-held belief that high levels of inequality in the US signal future opportunity, that is no longer the reality. Chetty et. al. (2017) find that the percentage of children who are able to rise above the income levels of their parents has fallen from 90% for cohorts born in 1940 to 50% for those born in 1980. Yet technical discussions among economists based on metrics such as Gini coefficients do not seem to resonate in public debates.

Divisions in the US go well beyond the income arena, and in ways that are particularly worrisome. In a new book, I document trends in inequality from the perspective of well-being, starting with standard metrics but also exploring how these relate to non-economic aspects of welfare, such as happiness, stress, anger, and, most importantly, hope (Graham 2017).

Hope is an important channel driving people’s willingness to invest in the future. My early research on well-being work highlights its particular importance for people with less means, for whom making such investments requires a greater sacrifice of current consumption than it does for the rich (Graham et al. 2004). In addition to widening gaps in opportunity, the prosperity gap in the US has led to rising inequality in beliefs, hopes, and aspirations, with those who are left behind economically the least hopeful and the least likely to invest in their futures.

A Tale of Two Americas

There are, indeed, two Americas. Those at the top of the income distribution (including the top of the middle class) increasingly lead separate lives, with barriers to reaching the upper class being very real, if not explicit (Reeves 2017). Those at the top have high levels of hope for the future and make investments in themselves and in their children’s health, education, and knowledge more generally. Those at the bottom have much lower levels of hope and they tend to live day by day, consumed with daily struggles, high levels of stress, and poor health.

There are many markers of the differences across these two Americas, ranging from education levels and job quality to marriage and incarceration rates to life expectancy. Indeed, the starkest evidence of this lack of faith in the future is the marked increase in premature deaths – driven largely but not only by an increase in preventable deaths (such as via suicide and drug over-dose) among middle-aged uneducated whites, as described by Case and Deaton (2017).

There are even differences in the words that these two Americas use. Common words in wealthy America reflect investments in health, knowledge acquisition, and the future: iPads and Baby Bjorns, foam rollers and baby joggers, cameras, and exotic travel destinations such as Machu Picchu. The words that are common in poor America – such as hell, stress, diabetes, guns, video games, and fad diets – reflect short-time horizons, struggles, and lack of hope (Leonhardt 2015).

Based on detailed Gallup data, we find stark differences across people, races, and places in the US. Remarkably, poor minorities – and blacks in particular – are much more hopeful than poor whites. Poor blacks are three times as likely to be a point higher on the ten-point optimism scale than are poor whites, while Hispanics are about one and a half times more likely than poor whites. Poor blacks are also half as likely to experience stress – a significant marker of ill-being – on a daily basis as are poor whites, while poor Hispanics are about two-thirds as likely.

Figure 1 Odds of being on a higher level of optimism, by race group (relative to white), within each income group 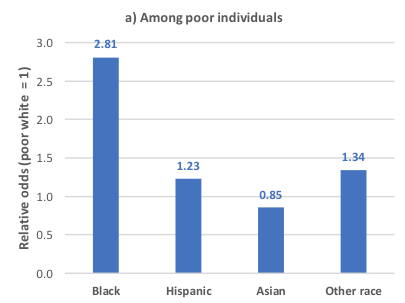 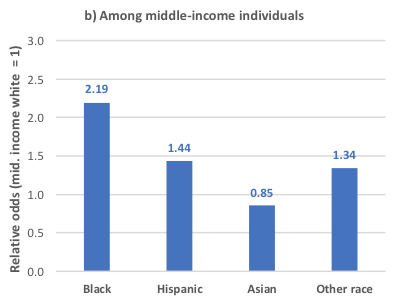 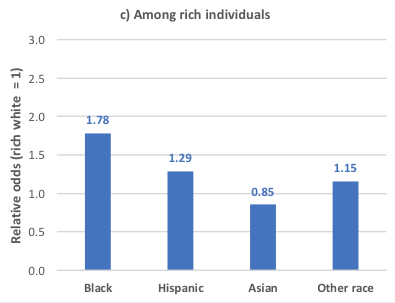 Figure 2 Odds of experiencing stress, by race group (relative to white), within each income group 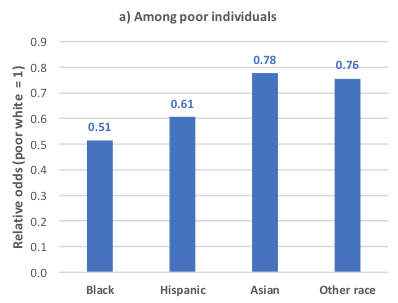 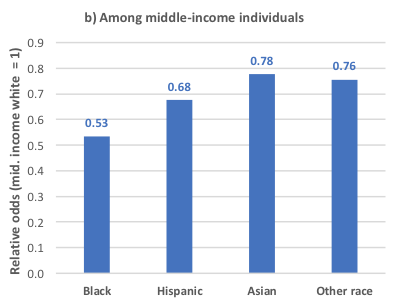 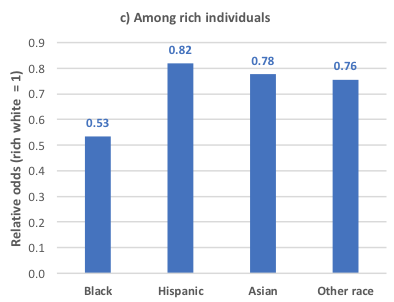 Psychological research points to higher levels of resilience among minorities compared to whites. Assari et al. (2016) find that blacks and Hispanics are much less likely to report depression and/or commit suicide in the face of negative shocks than are whites. Our research suggests that there may be an ageing effect. While younger blacks, particularly males, are more likely to be angry than their white counterparts (even though they are still more hopeful), older blacks are significantly less likely to be angry than whites.

More generally, urban places are more hopeful than are rural ones, as are places with higher levels of diversity. In recent research, Sergio Pinto and I find that the same places have healthier behaviours – such as more people who exercise and less who smoke (Graham and Pinto 2017). In contrast, we also find that the places with more respondents who lack hope for the future tend to have higher levels of premature mortality driven by ‘deaths of despair’, i.e. those driven by suicide and/or drug and alcohol addiction.

These differences are reflected across a range of inter-related trends, which again are more prevalent among uneducated whites. Reported pain, which is a gateway to both opioid addiction and suicide, is higher among whites than among blacks, and highest among rural whites. Reliance on disability insurance links to reported pain due to the injuries associated with many blue-collar jobs. Rates have increased in the past decades from just under 3% of the working age population to almost 5% for men. Premature mortality has increased dramatically for uneducated whites – particularly those in rural areas and small towns – compared to their black and Hispanic counterparts. A recent study finds that civic participation of all kinds is also much lower in rural areas, areas that also tend to have far less access to broadband internet (Kawashi-Ginsberg and Sullivan 2017). These rural–urban trends map remarkably closely, meanwhile, with political divisions, voting patterns, and even alternative sources of news in the US.

The figures below depict rough geographic regularities – via state averages – in the distribution of stress, reported pain, reliance on disability insurance, and premature mortality for poor white respondents (the cohort that is demonstrating the starkest signs of despair). Our econometric analysis discussed above identifies the specific role that lack of hope plays in this vicious circle.

What Can Be Done to Reduce Despair?

Unfortunately, there is no magic bullet for solving widespread desperation and its negative manifestations. It is even more difficult to conceive of solutions in a political cycle that hinges on daily crises and scandals. Not surprisingly, the proposals coming out of the current administration are simply to make across-the-board cuts in social programmes – far from the creative thinking required to make these programmes part of the solution. In the short run, solutions will likely be piecemeal and bottom-up, emanating from communities themselves with support from local level political actors and organisations.

There are, of course, major policy changes that could help over the longer run. Firstly, while deaths of despair are exactly as described, the all too readily available supply of opioids and other addictive drugs is an issue that policy can productively address. Another key policy area, which I highlight in the book, is the need to re-think safety net policies in the US. Food stamps, for example, tend to stigmatise recipients, and the programmes that provide cash assistance for the non-working poor have been shrinking, particularly in Republican states. Given that 15% of prime-age males are out of the labour force – and this is projected to grow to 25% by mid-century – another approach is clearly necessary.

The technological displacement of low-skilled jobs is here to stay – and is an important issue for many countries, well beyond the US. Addressing this issue will require longer-term changes, such as education and incentives that provide the young in economic desserts the tools to move to where the new jobs are. Older displaced/out-of-the-labour-force workers pose more of a challenge. Well-being research offers some lessons, such as the benefits of volunteering, participating in community activities, and other ways of avoiding the isolation and despair that accompanies unemployment.

Finally, restoring hope is not impossible, and as a start entails reaching out to those in distress with positive strategies for the future. Experimental research, such as that by Hall and Shafir (2014) and Haushofer and Fehr (2014), shows that simple interventions that introduce a source of hope to the poor and vulnerable can alter behaviour and lead to better future outcomes. The alternative is for desperation to yield even more support for politicians fostering division, exclusion, and an impossible return to the past. The associated turmoil, as recent elections and events in both the US and the UK demonstrate, is counter-productive for all, and particularly so for the most vulnerable.