Patient readers: Those of you who attended yesterday evening’s San Francisco Meetup will have seen Yves wearing a fetching black eyepatch. While on the road, she scratched the cornea of her dominant eye, which resulted in (I hope I have this right) corneal edema, followed by a tour of consumer-level West Coast emergency rooms. She should be OK by the end of the week, but in the meantime she finds it difficult to read, let alone write, and so for the next few days you will be seeing a lot more of me, Jeri-Lynn, and Outis than you usually do. –lambert

Hackers Could Confuse Driverless Cars By Manipulating What They See Jalopnik

The other Gulf conflict: How the Qatar crisis is playing out in D.C. back rooms Salon

The Brexit Diaries: 5 – On briefcases, orchestras and Winnie the Pooh Deutsche Welle

The Remainers who now chair select committees will harry the government over Brexit British Politics and Policy, London School of Economics. Dense Inside Cricket, but useful.

The new £10 note featuring Jane Austen has been revealed by Mark Carney, but it has a big problem Telegraph. Meanwhile, the Telegraph confuses sarcasm and irony, not a good look when covering Austen. Maybe they can hire a few of the copy editors the New York Times sacked.

IMF to announce Greece needs further debt-relief measures New Europe (MT). “Greek sovereign debt does not appear to be in a sustainable trajectory without an outright haircut., that is, a non-starter for European creditors.”

Analysis: What can Republicans do if they can’t repeal Obamacare? Susan Page, USA Today. “A big tax bill? That should be easy.”

Why Obamacare Passed but the GOP Health Bill Failed WSJ

‘It’s an insane process’: How Trump and Republicans failed on their health-care bill WaPo

How the nursing home lobby blocked reforms in Louisiana The Economist. Ka-ching.

Kamala Harris: The Democratic message is ‘telling the American public we see them’ Yahoo News. Next up: The sense of hearing.

Democrats Are Trying to Win the 2018 Midterms in All the Wrong Ways The Nation (Re Silc).

Jane Kleeb, Nebraska Democratic Party Chair, on How to Overcome the Rural-Urban Divide In These Times

Trump and ‘The Purloined Letter’ LRB. As coherent as anything else I’ve read on this topic, at least as far as the motives of the players go.

The Trumps and the Truth WSJ. “Everything that is potentially damaging to the Trumps will come out, one way or another. Everything.”

Trump had undisclosed hour-long meeting with Putin at G-20 summit WaPo. At a G-20 dinner for all the leaders, apparently. Beginning with the dessert course…

If Loving Putin Is ‘Right,’ I Want to Be Wrong The American Conservative

When To Trust A Story That Uses Unnamed Sources FiveEightyEight. Urges that multiple sources are more trustworthy than single ones, which rules out the possibility that a cabal of sources is, er, colluding.

Why Republicans Want the 2020 Census to Fail Rolling Stone

The Belfer Center for Science and International Affairs at Harvard Kennedy School launched a new, bipartisan initiative today called the “Defending Digital Democracy” (DDD) Project. Co-led by the former campaign managers for Hillary Clinton and Mitt Romney and experts from the national security and technology communities, including Facebook and Google, the project aims to identify and recommend strategies, tools, and technology to protect democratic processes and systems from cyber and information attacks….

[T]he project will be run by Eric Rosenbach, Co-Director of the Belfer Center and former Assistant Secretary of Defense….

“Entities.” Why do I think that hand-marked paper ballots, hand-counted in public, won’t make it onto this group’s agenda? Good to see Robbie Mook’s got some cash coming in, though. He must need it.

Dimon Says Being an American Abroad Is ‘Almost an Embarrassment’ Bloomberg

the mass defunding of higher education that’s yet to come anova. Yikes.

To My Fellow Plutocrats: You Can Cure Trumpism Nick Hanauer, Politico. Must-read.

Are You Ready To Consider That Capitalism Is The Real Problem? Fast Company (!)

Stitched up by robots: the threat to emerging economies FT

How could we cope if capitalism failed? Ask 26 Greek factory workers Guardian

When is stress good for you? Aeon

Too Many Americans Live in a Mental Fog Bloomberg (Re Silc). Yeah, and they’re running the country!

Locate Your Representative/Senator In Hell Another Word for It. News you can use!

Finance Can Be a Noble Profession (Yes, Really) HBR 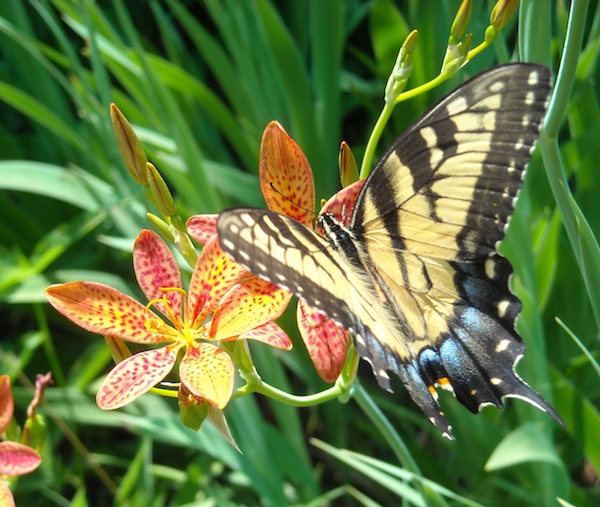 A Tiger Swallowtail nectaring in my blackberry lily patch. I was digging this afternoon (digging up quack-grass tubers — it has taken over part of my backyard and I still have veggies in pots that need to be planted, so I’m digging to clear for the planting) and this critter visited my wildflower patch. I took a break and broke out a cheap camera and took a dozen shots.