By Elizabeth McGowan, a Washington, D.C.-based energy and environment reporter. Funding for this article was provided by a Solutions Journalism Network grant. Originally published at Grist

First in a series on communities overcoming obstacles to become cleaner and greener.

Sixteen months ago, the coal-fired Huntley Generating Station, which sits on the banks of the Niagara River, stopped producing power for first time since World War I.

The impact of Huntley’s decade-long slowdown — and finally shutdown — hit this upstate New York community like a punch to the gut.

In just five years, between 2008 and 2012, Huntley’s pre-tax earnings tumbled by $113 million as it operated far below capacity, translating into a combined revenue hit of at least $6.2 million to the town, county, and local school district. That precipitous decline came when state education funds were also shrinking. Belt-tightening wasn’t enough; 140 teachers lost their jobs. Three elementary schools and one middle school closed their doors.

Rebecca Newberry, a 35-year-old former bartender and LGBT-rights activist, saw her home town facing the same fate that has befallen so many other Rust Belt communities that fell on hard times following an industrial exodus. She was determined not to let it happen to the place where she grew up. And she was fortunate enough to find a diverse group of allies who were willing to fight for their survival.

By combining the resources of her nonprofit, the Clean Air Coalition of Western New York, with area labor unions and other community groups, Newberry helped to hatch a plan for Tonawanda’s next chapter — and provide an inclusive, equitable template for other blue-collar towns facing the loss of dirty energy jobs and other polluting industries. (The jargony term for this in advocacy circles is “just transitions.”) 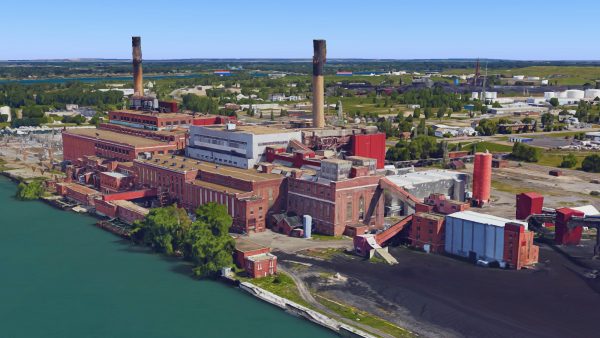 The retired Huntley Generating Station on the banks of the Niagara River. Google Earth

The group that Newberry helped form would come to be known as the Huntley Alliance. The partnership convinced New York lawmakers to provide Tonawanda with a temporary cash infusion to sustain the town as it reinvents its tax base — the first time a state has offered a financial cushion to a community that was financially reliant on a coal-fired power plant.

“It was a trauma when Huntley finally announced it was closing,” Newberry says, “so we had to come at this from a place of healing. Our goal was to stop the bleeding to the industrial and public sectors.

“Always, our key question is: How are we going to take care of our people?”

Tonawanda, a Native American word meaning swift waters, was founded by white settlers in 1836. East of the railroad tracks that run north from Buffalo to Niagara Falls, the 20-square mile town has nearly 73,000 residents and is known for its top-flight paramedic service.

But west of the tracks, it’s anything but quaint. Huntley and 50-plus industrial facilities coexist within a three-mile radius, mingled with older homes and trailer parks. Big grinding trucks assault the ears, and the air carries a distinct petroleum-rubber-chemical-exhaust stink.

The energy giant NRG purchased Huntley in 1999. Although the oldest current coal-fired unit dates back to 1942, the facility’s steam-generating history stretches back to World War I. NRG retired half of the plant’s 760-megawatt capacity in 2006 and 2007, with a corresponding drop in tax revenue.

In the fall of 2013, Peter Stuhlmiller, president of the Kenmore-Tonawanda Teachers Association, reached out to Richard Lipsitz, president of the local AFL-CIO chapter, to figure out how to save the community’s schools. They were soon joined by Newberry’s coalition, the Sierra Club, and trade unions representing steelworkers and Huntley employees.

“This country has a very poor record of rescuing communities built up around coal and heavy industries,” Lipsitz says. “Our goal was to stabilize the economy and provide income for a town that needed it desperately.” 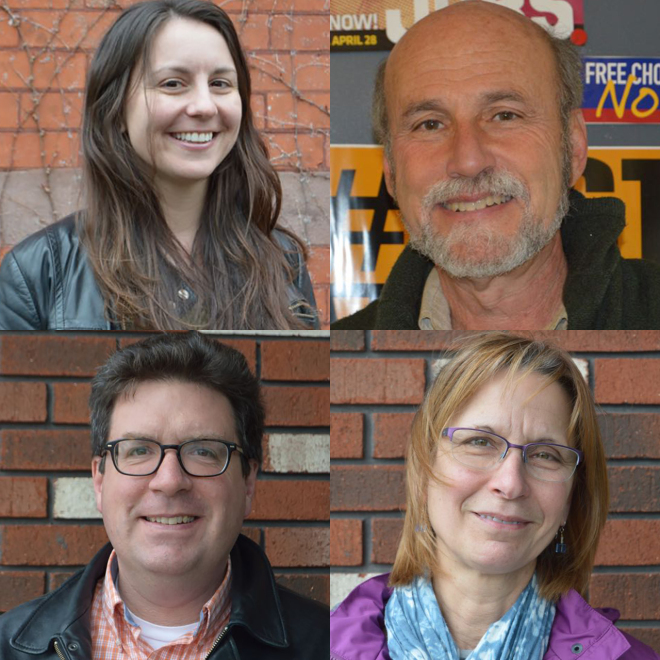 Although their goal was the same, the various factions in the early Huntley Alliance had different priorities. The united front fell apart when a local Sierra Club member organized a protest calling for Huntley’s closure — with some demonstrators wearing union shirts. Labor leaders felt the rally threatened the livelihoods of the 70-plus remaining NRG employees. Finger-pointing ensued, and the plant’s union walked away from the nascent alliance.

Then the whole effort collapsed.

To motivate the Huntley Alliance to regroup, Newberry circulated preliminary results of a study her 200-member nonprofit commissioned. “Given that the plant is located in a region with substantial excess capacity for at least the next decade, the Huntley units appear ripe for retirement,” the Institute for Energy Economics and Financial Analysis concluded in a 24-page report released in January 2014.

“Going through this helps me to visualize that we can do better as a society,” Newberry says. “We don’t always have to be fighting with one another.”

At least 1,500 members of the steelworkers union live in the Tonawanda area, many drawing paychecks at employers such as Tonawanda Coke, 3M, DuPont, and Sumitomo Rubber. They backed the alliance’s focus on job retention and creation, because they feared property taxes would spike after Huntley’s shutdown — to make up for lost revenues from the plant. That could spook existing employers and repel potential newcomers.

“We want to make sure there are good, clean, high-road, family-sustaining jobs that improve the quality of life,” says Dave Wasiura, the union’s organizing coordinator for the area.

Retired teacher Diana Strablow, a member of both the Sierra Club and Newberry’s group, was initially frustrated that the dangers of climate change sparked by coal-fired power plants weren’t the alliance’s number one priority. But Newberry helped her understand how a stumble by Huntley could mean a fall for her entire community.

“I was the angry environmentalist,” Strablow says. “I’ve learned we need to take care of both our workers and our environment.”

Once reunited, the Huntley Alliance needed clear goals — specifically ones that met the needs of the town’s residents. Through a series of listening sessions, door-to-door surveys, and voter-registration drives, the partnership channeled the hopes and anxieties of hundreds of residents. The wish list that emerged included keeping schools intact, creating good-paying jobs, expanding the tax base, and improving public health and the environment.

Those desires would be compiled with proposals and needs of businesses and other stakeholders into Tonawanda Tomorrow, a succinct blueprint for the town’s trajectory. A final version was released in June.

It was a tall order, so the alliance set about lobbying New York state legislators for “gap funds” to keep the town afloat during its transformation. After all, Newberry reasoned, Huntley had supplied electricity far beyond Tonawanda’s borders. Rather than asking lawmakers to find money for them, Newberry and her colleagues combed through the state’s budget themselves and compiled a list of potential funding pots to draw from.

By August 2015, when NRG announced Huntley’s impending retirement, a Democrat-majority State Assembly and a Republican-controlled Senate had already voted to back the alliance’s brainchild. When the 102-acre power plant went offline seven months later, the framework was in place for $30 million.

“If a state as geographically, politically, and economically complicated as New York is capable of this,” Winland says, “then other states can look for parallels.” 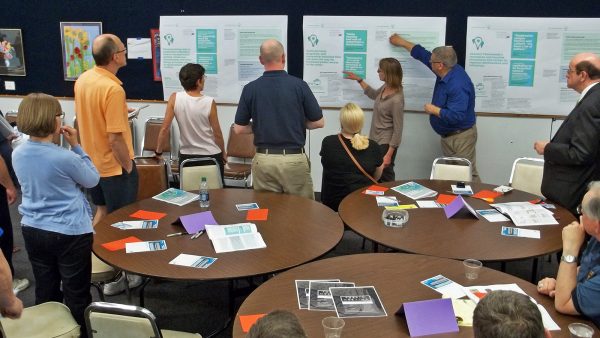 Community members give feedback on a draft of the Tonawanda Tomorrow plan at a public workshop in May. One Region Forward

This spring, legislators expanded the Huntley-inspired measure — in part due to Governor Andrew Cuomo’s announcement last year that New York would strive to be coal-free by 2020. The gap fund’s budget ballooned from $30 million to $45 million, its availability was extended from five to seven years. (It now covers communities with plants powered by any fuel source.)

The fund so far has shored-up the school system — which is no longer hemorrhaging teachers — stopped electricity bills from skyrocketing, and kept the budget for the prized paramedic unit intact.

David Schlissel, a coauthor of the 2014 report questioning the Huntley Generating Station’s viability, emphasized that the alliance’s proactive approach and the New York legislature’s response offer a vital lesson for the rest of the country.

“Instead of spending millions on propping up coal plants,” Schlissel says, “we need to spend money to help communities make an economic transition.”

The Huntley Alliance took its cues from other communities forced to evolve beyond heavy industry. Members traveled as close as Appalachia and as far as Germany, where they were amazed to witness how the German government funded worker retraining programs and recycled old production plants, as renewables supplanted fossil fuels.

“That gave us hope that a cleaner environment can be achieved in Tonawanda without leaving broken workers behind,” Newberry says.

Back home, the alliance’s efforts also benefitted from a $160,000 grant from an Obama administration initiative to help communities distressed by the demise of coal. President Trump proposed defunding the program in his 2018 budget.

Not Another Bethlehem Steel

Even with all the planning, the Huntley station’s idle smokestacks cause jitters among Tonawandans who have watched the 1,000-acre Bethlehem Steel plant idle in Lackawanna, 20 miles to the south, for three and a half decades. References to the hulking carcass send shivers down the spine of Tonawanda Town Supervisor Joseph Emminger.

“We are not going to have another Bethlehem Steel here,” he declares.

County and town planners view the reinvention of the Huntley site as a vital part of transforming 2,300-plus brownfield acres into greener ventures. Recent cleanups have allowed existing companies, such as Sumitomo Rubber, to expand and invited in newer industries, such as solar technology and warehousing operations. 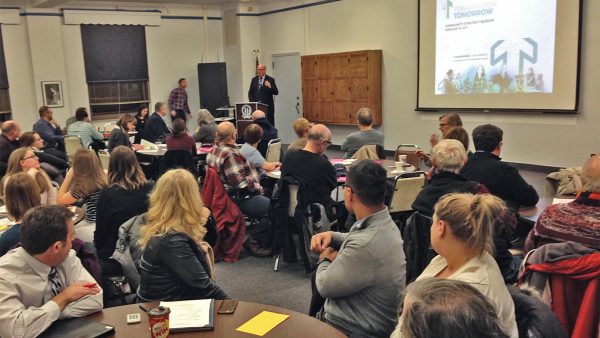 Possibilities for what could fill the Huntley site were tossed about at Tonawanda Tomorrow sessions. They included a bioenergy plant, an industrial heritage museum, and much-needed green space. River access along the town’s six miles of shoreline is now limited to one sliver of parkland south of the power plant.

That’s in contrast to the town’s northern neighbor — a significantly smaller city, confusingly also named Tonawanda — where a lush, verdant ribbon beckons visitors to the riverfront. A pockmarked bicycle/pedestrian path in the town suddenly turns pristine at the city line.

“We have a clear pathway forward,” Newberry says. But questions about what will become of the Huntley site make it clear, she adds, that “our work is not over.”

Unlike the Bethlehem Steel site, Huntley is not eligible for New York’s Superfund Program, says Erica Ringewald, a state Department of Environmental Conservation spokeswoman. However, NRG or a future owner that takes on the remediation effort could qualify for tax credits through the state’s brownfield cleanup program.

A preliminary to-do list at the site includes moving an 11-acre pile of unused Powder River Basin coal to a 116-acre NRG landfill about a mile away; closing a coal-ash lagoon; and continuing to clean 11 petroleum bulk storage tanks. But according to a state environmental assessment, contamination levels there do not “represent a significant threat to human health or the environment.”

“I don’t have a crystal ball, so I don’t know how long this takes,” NRG spokesman David Gaier says, adding that the company is just beginning the long-term decommissioning process for Huntley. “But you don’t go from a working power plant to condos in a year.”

Emminger, the town supervisor, isn’t envisioning condominiums — or any other type of housing — at the waterfront site. “Residential is too risky there,” he says, adding that light industry is more likely.

“We have a proud industrial past,” Emminger notes. “Hopefully, it’s going to be part of our future.”