The Wall Street Journal’s in-depth story, The Life of a Contract Worker Is a Grind of Snubs, Anxiety and Stagnation, focuses on workers heretofore been largely ignored by the press, in part because they are not tracked in labor surveys. Think of these contractors, typically hired by large corporations via agencies, as long-ish term temps. An overview section: 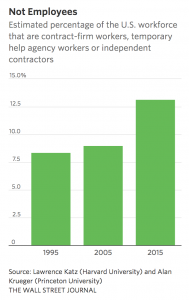 Millions of contractors now do heavy lifting, paper pushing and other jobs for American companies that have replaced employees with outside workers. Within the next four years, nearly half of the private-sector workforce in the U.S. will have spent at least some time as a contractor, temporary employee or other type of outside job, estimates MBO Partners, a provider of support services to self-employed professionals.

The costs hit home in every paycheck and every day on the job…Outside workers usually aren’t surprised when they get no paid holidays, sick days, employee-sponsored health insurance, 401(k) plan or other perks routinely offered to traditional employees at the same companies.

What wounds more deeply are things taken for granted or barely considered at all by regular employees, outside workers often say. The work lives of contractors frequently feel like a series of tiny slights that reinforce their second-class status and bruise their self-worth. Even when contracting jobs are easy to get, they can vanish instantly, and turning a series of contract assignments into a real career remains out of reach…

No one knows how many Americans work as contractors, because they don’t fit neatly into the job categories tracked by government agencies. Rough estimates by economists range from 3% to 14% of the nation’s workforce, or as many as 20 million people. The surge might help explain a riddle of today’s labor market—jobs are plentiful, but many Americans feel anxious and insecure about their finances and careers.

This situation parallels that of “freeters” in Japan, which became common in the wake of their financial crisis. Because large companies had offered career employment, to preserve their workforces, Japanese firms compressed wages (as in the wage gap between entry level workers and top executives which was already narrow by Western standards, became even tighter) and cut back on the number of hires out of college who were on a lifetime employment track. Many were hired as temps, with no job security and no solid attachment to their employer. Because identification with social groups is central to Japanese culture, being in but not really part of a company is stressful. And even thought corporate freeters are generally better paid than other underemployed workers like convenience store clerks, they are not seen as good marriage material.

Even for supposedly thicker-skinned Americans, the second class citizen status is trying:

At many companies, contractors aren’t allowed to attend important meetings, go to the company gym or bring their kids to Take Your Child to Work Day. They keep quiet because only full-time employees are expected to speak up. Working harder, smarter or longer offers little advantage when applying for a job directly with the company.

Nothing is loathed more than the nametags or identification badges that advertise the lowly ranking of contractors in the workplace pecking order. Technical writer Don Cwiklowski Jr. worked as a contractor at Mastercard Inc. for four years. He says co-workers often glanced at the badge dangling from his neck, saw the red color that signaled his contractor status and looked right past him.

He got a green badge when he was hired as a full-time employee at Mastercard in St. Louis in 2012. Some of the same people who had shunned him started saying hello in the hallways, says Mr. Cwiklowski, 53.

If this Journal’s sample is representative, most of the US contractors, by contrast, worked for some of their careers in traditional corporate jobs but fell into contractor roles. As author Lauren Weber stresses, “People usually don’t go looking for contract work. It finds them.”

And even though the ones profiled want full time jobs, making the transition from contractor to employee is rare.

Bear in mind that these workers are not consultants and are effectively temps. By contrast, a consultant writes his own proposal for an engagement, specifies what the end product will look like, works on his own schedule, and supplies his own materials. Consultants typically also charge a large premium to what an employee in the same general skill areas would be paid. The reason is that consultants typically have more highly developed expertise and fancier credentials than staff in the same area of most clients, plus it is understood that the client is paying more to rent specific skills than if it bought them.

By contrast, these corporate contractors work like employees but without the benefits. They have to show up at the office like everyone else and usually work on premises and report to a manager. They do not get benefits like vacations, sick days, 401 (k)s and medical coverage. Most important, they are hired for gigs that typically run for months at a time, but can still be terminated early. And their pay is typically lower than that of the employees with which they work. And the corporation hiring their services does not pay employer FICA taxes.

Mind you, this approach is long-standing, but the Journal indicates that it is becoming more common. I’m sure readers have their own stories, but for instance, on Wall Street, many if not most of the IT professionals that looked like employees were on long-term contracts. Similarly, an ex-sister-in-law was the manager of a small unit at Ford for seven years…as a Kelly Girl. Another example is the use of adjuncts who are often paid around $30,000 a year despite having advanced degrees.

The Journal also describes how contracting also being implemented to treat the contractors a more like second-class citizens, out of a view that that reduces the tax risk of having the contractors deemed to be employees and have the company that engaged them hit with a tax bill. This key paragraph comes well into in the story:

Ever since Microsoft agreed to pay $97 million in 2000 to settle an eight-year-old class-action lawsuit filed by “permatemps” who accused the tech giant of using temps to do the work of employees, companies have tried to keep their outside workers at a distance.

An article at Fast Company at the time of the settlement described the problem for workers:

To be a permatemp is to sit in the oxymoronic crosshairs of the new economy. You enjoy — or you suffer — the worst of both worlds. Free agents choose to work as independent contractors because they want to, because it gives them more leverage in the job market and more control over their lives. Permatemps work as not-so-independent contractors often because they feel as though they must. They’re stuck — or at least that’s how they feel. The ones who worked at Microsoft are case studies of the dark side of free agency, examples of how an experimental human-resources policy that was intended to encourage flexibility can have unintended consequences.

And it and other commentaries made clear that the legal win didn’t necessarily help workers all that much, as this article attests. Microsoft’s solution was to make sure no contract workers had an assignment of more than a year, with breaks of at least 100 days. If you can’t line up a new gig when the Microsoft assignment ends, that means no income. Although the Journal article does not say so, at least right after the Microsoft settlement, many companies also adopted the “one year maximum” rule. Weber also intimates that the other measures that make contractors into second-class citizens were to bolster the case that they weren’t de facto employees.

On the one hand, given how more and more jobs are McJobs, it may seem misguided to depict these contractors as downtrodden. They work, presumably most of the time, for more than Amazon warehouse workers make, in not-physically taxing jobs in corporate offices.

But like adjuncts at universities, the fact that things are not as bad as they might be does not mean that they are good. These workers are mainly downwardly mobile, visible examples of the decline of the middle class. Uncertain incomes and the lack of benefits, particularly health care, makes it hard for them to plan and save, and even get by. Pressure to keep your head down at work even more than employees do adds to financial stress.

Even though many of the comments on the article took the “this is how the market works, too bad” posture, there was some pushback, such as:

It’s also interesting to remember that Americans elect Socialist-minded Presidents like FDR and LBJ when they are relentlessly exploited by anti-social employers who beat them out of their paychecks and pensions, and then hog all the wealth that the workers created for the 1%. More Liberals and Socialists are waiting in the wings, including Bernie Sanders.

Agreed. I think this all started when we outlawed child labor. Now, kids expect their parents to pay for everything. Also, why do we have Social Security? People used to work until they dropped dead, and that’s what the free market said was right.

I take the arguments among Wall Street Journal readers as a sign that even well-heeled individuals are becoming less and less enamored of businessmen squeezing workers. Some of them said as employers they paid more not just to get better workers but to reduce turnover, and they had a better bottom line as a result. But the trend still seems to be more and more towards labor-squeezing. So Sewell may be right. If short-sighted employers can’t save themselves from their worst impulses, the pressure for a fairer deal will have to come through political channels.