I don’t recall ever seeing a situation like this with a major story in the ten-plus years I have been blogging. At 1:23 PM EDT, the Wall Street Journal published a story as its lead item, Japan’s SoftBank Wants Big Chunk of Uber, But at Steep Discount. We’ll describe the article in greater detail below, but it’s describes as as much as $10 billion but with all but $1 billion at a 30% discount from the $68 billion valuation as of its last funding, although the deal would make a gesture of honoring the old valuation by putting in that $1 billion at the old level.

Over 12 hours later, no major financial or tech publication has re-reported it. Look at Recode as an example: 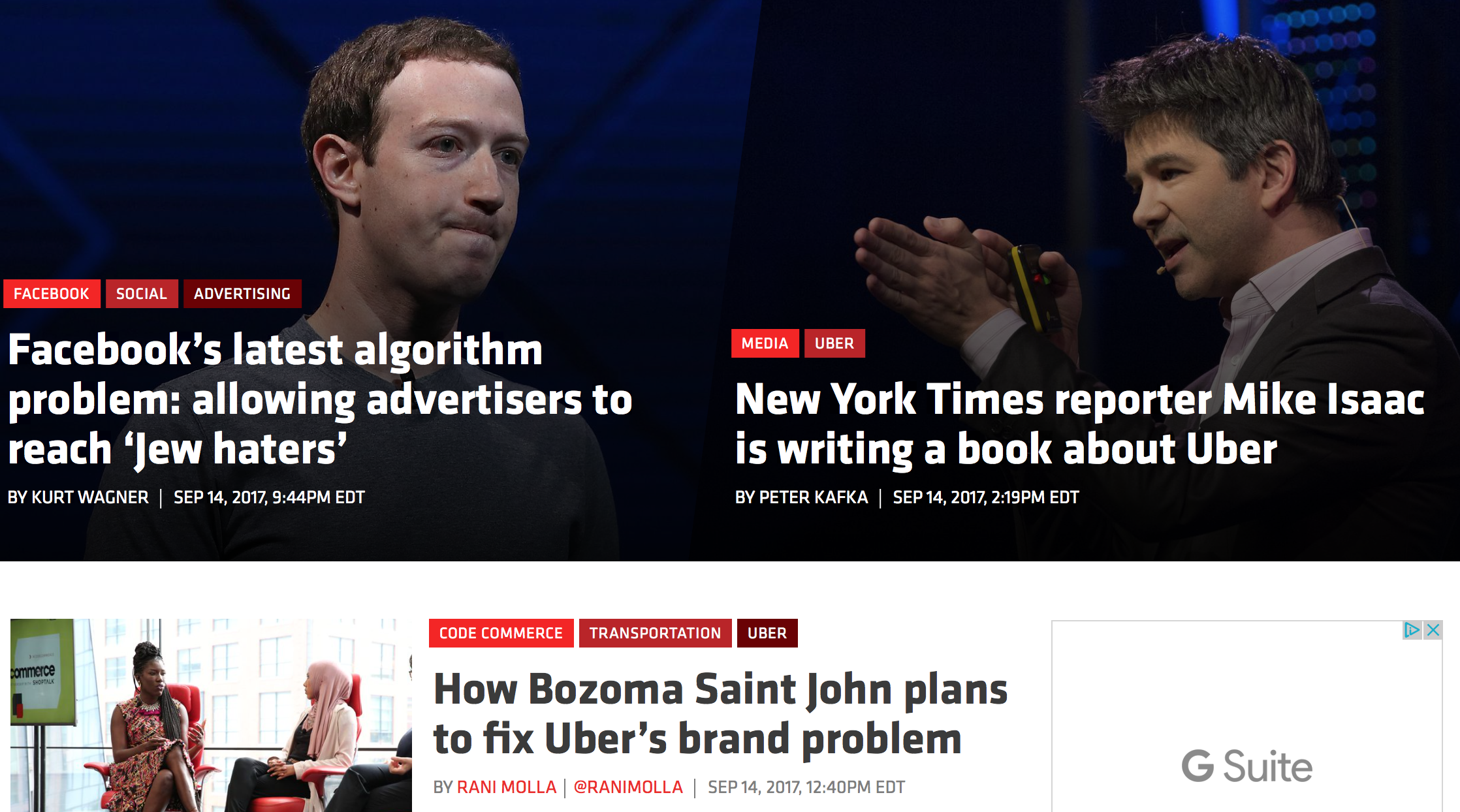 A search at the Financial Times on “SoftBank” shows these as the most recent stories: 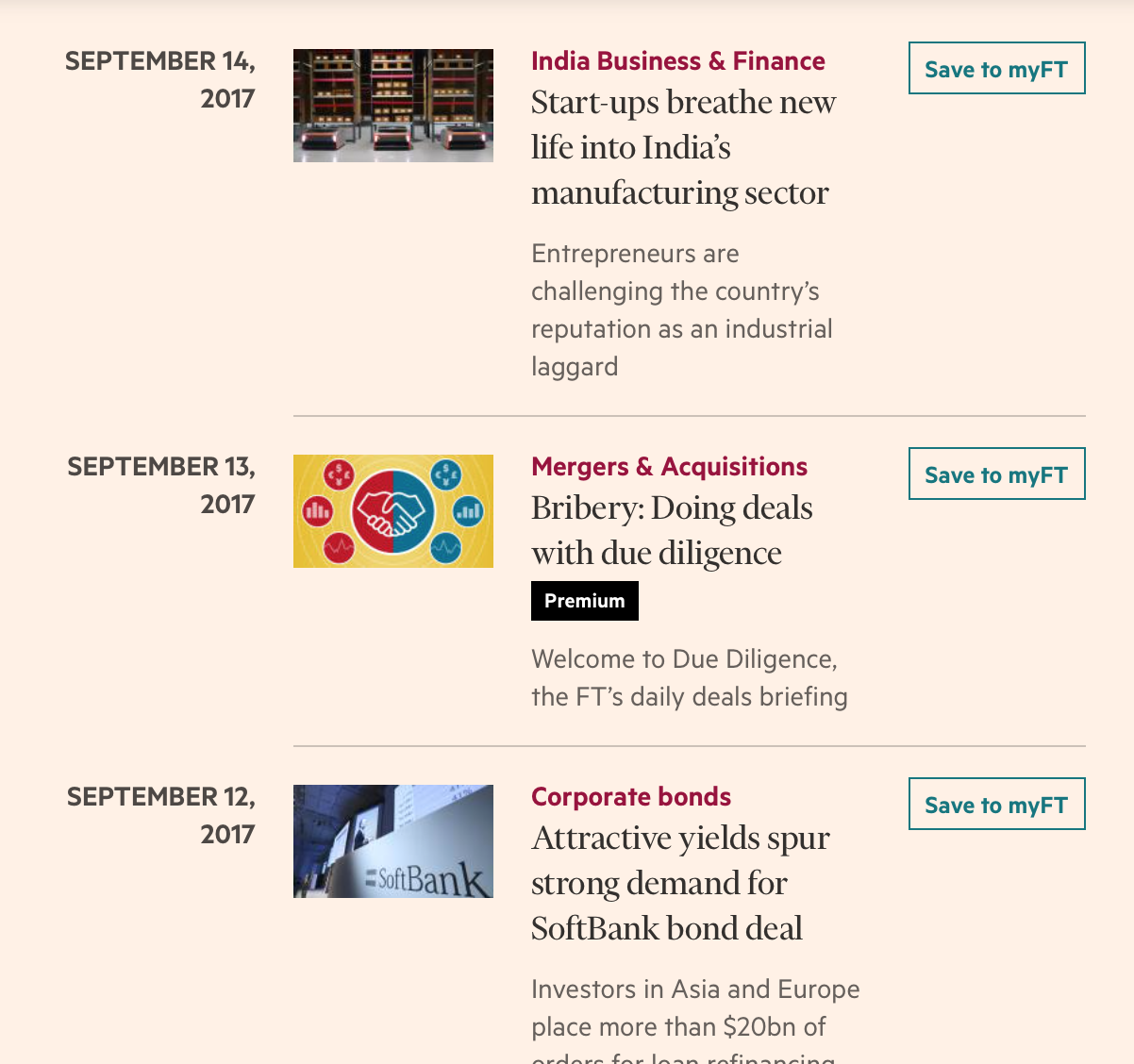 And at the New York Times, where its DealBook makes a point of being on top of transactions and tech: 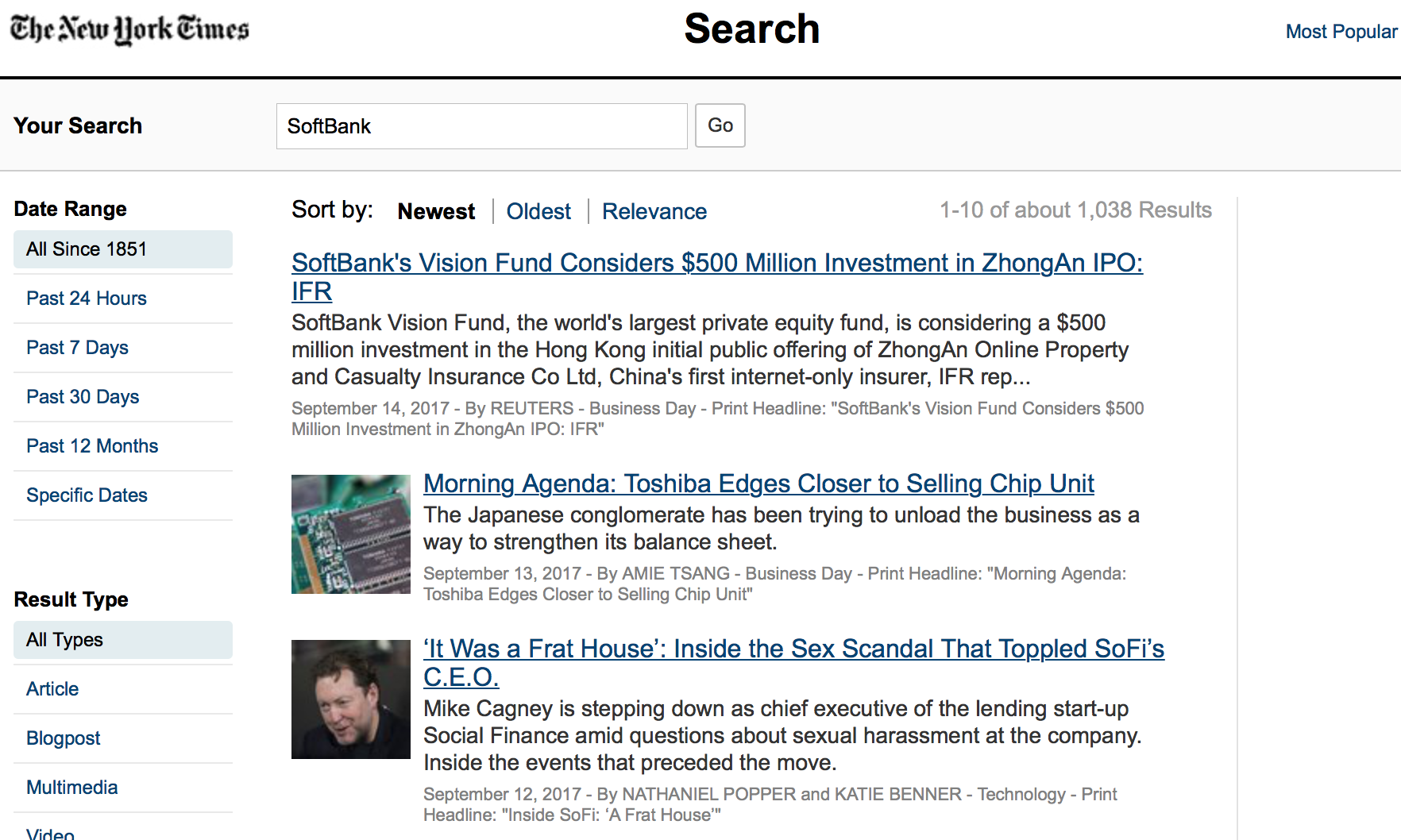 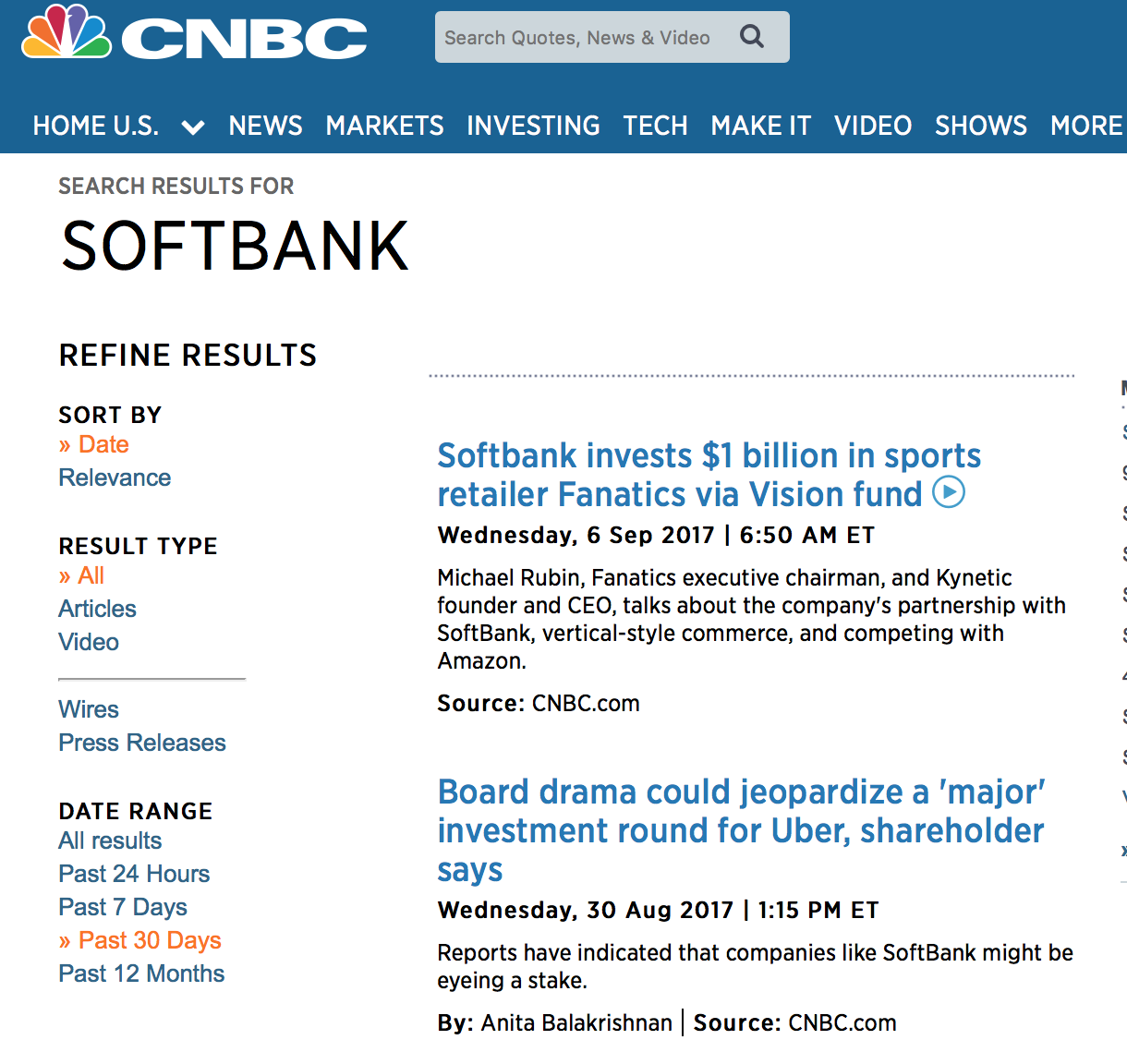 At Bloomberg, there is a mention of sorts, but only one line in a story on Lyft, Alphabet Considers Lyft Investment of About $1 Billion. It’s now one of the top stories on the Bloomberg site.

Mind you, the proposed Lyft investment is less than 1/10th of the amount that SoftBank is supposedly willing to put into Uber. In the last sentence of this six paragraph story, the Bloomberg authors make a passing mention of the SoftBank deal: “He’s [Khosrowshashi’s] looking to complete a fundraising deal of his own: Uber is advancing on an investment from SoftBank Group Corp. and others of as much as $12 billion, most of which would allow existing shareholders to cash out.”

And at Reuters, we have the odd spectacle of a BreakingViews opinion piece keying off the Wall Street Journal account, with no related Reuters news story. Even odder is the premise of the piece, AI is the big driver of SoftBank’s Uber move:

Artificial intelligence is the backseat driver of SoftBank’s move on Uber. Masayoshi Son’s tech and telecoms group is close to investing $10 billion in the U.S. ride-hailing giant, the Wall Street Journal says. That reflects the Japanese maverick’s belief in the disruptive power of self-driving cars.

Huh? As anyone who has been paying the slightest amount of attention to Uber knows, whether it has any self-driving car technology to speak of is the subject of litigation with Alphabet, which alleges that Uber stole pretty much everything it has from Alphabet. Why would SoftBank pay $10+ billion for a probable empty bag?

To drive the contrast home, when the Wall Street Journal first reported that SoftBank was interested in investing in Uber, its account was speedily re-reported by everyone who mattered.

The failure of other media outlets to take up the Journal story seems even odder given the detail in the piece, sine detail is typically evidence of getting to the bottom of a situation. For instance:

SoftBank and its $93 billion tech-focused Vision Fund are proposing to buy at least 17% of Uber and as much as 22% through a combination of share purchases from the company and a tender offer with employees and investors who want to sell, according to people familiar with the matter. As part of the offer, it is seeking two board seats, these people said, adding to Uber’s nine sitting directors.

Negotiations could conclude as early as next week…

But the offer faces hurdles. SoftBank’s hope of securing a sizable stake is dependent on investors agreeing to sell enough of their shares at a discount of 30% or more from Uber’s last valuation of nearly $70 billion through an auction process open to most shareholders, people familiar with the talks said. That would value Uber at around $50 billion, though the price could change based on how many shares investors indicate they are willing to sell…

SoftBank is also planning a direct investment of at least $1 billion at Uber’s current valuation of about $68 billion, these people said. That would help placate existing investors concerned the auction process could devalue the company as it heads toward an initial public offering in as few as 18 months.

The idea of an auction sounds bizarre in this context. The only way I could see it working is if Softbank has a price range, and started by making its offer at the lowest price it thought might fly and seeing how much it got. Its maximum would be determined which price it hit first: the highest price needed to secure all the shares it wanted or the the top price in its offer range. The problem with that is that the highest price SoftBank is willing to pay might not be enough for it to get enough shares for it to obtain the two board seats it wants. So I would assume that the entire deal would be set up so that any offers were contingent on SoftBank getting enough shares in total.

In addition, the process of structuring such a process is further complicated by the fact that each funding round had unique terms and the shares are therefore not fungible, unlike the shares of publicly traded stocks. So how does SoftBank run an auction with that complexity? It would have to go something like: “We offer X for Class A shares, X1 for Class B shares, X2 for Class C shares” and so on, and then keep re-adjusting the prices for each class of stock in successive rounds.

Hubert Horan weighed in by e-mail:

The individual elements of this story are vaguely plausible but absolutely make no sense in combination.

How do you buy a major piece of the company at a deep discount yet maintain the $68 billion valuation?

Why would anyone provide critical financing (much less $10 billion in financing) at a critical point in a company’s history without establishing direct control over board governance and management?

Why would anyone provide critical financing before Waymo and the other huge litigation risks had been resolved/mitigated?

Any major investment would affect future governance in a way that would either significantly strengthen or weaken Kalanick’s role and leverage. Why would major parties (presumably including Benchmark) sell major bits of their holdings and jeopardize Board seats and leverage over the IPO and future decisions?

Why would you pay Khosrowshahi $200 million to join if you already had deal covering the company’s biggest near-term strategic challenge? It could be this is part of Kalanick’s objective of putting off an IPO as far into the future as possible. But this is at the heart of the unresolved civil war between Kalanick and Benchmark. And it is hard to believe that Khosrowshahi’s compensation package wasn’t tied to completing an IPO in the next two years. He said as much after being appointed, and Benchmark would have never agreed to Khosrowshahi as the “compromise” CEO if this hadn’t been made explicit.

My guess all along was that Son was not really following the Japanese business norms that we are both familiar with and that the Japanese press seems to be assuming. If he’d been offended by Uber’s ongoing violations of M&A protocol, he would have sent discreet (but unmistakable) signals of his disinterest a long time ago. Absolutely none of the other Softbank investments mentioned in the article are remotely comparable to Uber.

Several of the hypothetical motives we’ve discussed in the past (thinks he can get control of Uber at a screaming bargain price; Uber’s Asian operations turn out to be “collateral” for a loan dressed up to look like equity; it really is a Benchmark exit deal that locks in huge gains, etc) could still turn out to be the real explanation, but major elements of the WSJ story are inconsistent with all of them.

Now all of these squares may be circled somehow and all of this skepticism will prove to be wildly off base. But a general rule is the longer a deal is in play, the less likely it is to come to fruition. And this SofBank-Uber deal talk is already looking a bit long in tooth.