The $3 trillion global fashion industry is second only to the oil industry in its pernicious impact on the environment.

The red hot, growing fast fashion industry– which produces cheap, disposable clothes, sometimes for a single use– only worsens the industry’s environmental impact, by generating huge amount of textile waste. US consumers typically each toss out eighty pounds of textiles per year, while those in the UK, on average, 350,000 tonnes of used clothing ends up in landfills annually (as I discussed in this post, The High Hidden Costs of Fast Fashion).

Forbes has just published a ridiculously upbeat assessment of this problem, its headline clearly spelling out its thesis: Why India and China May Be The Solution To The World’s Fast Fashion Crisis.

Forbes rests much of the argument on two observations. First, emerging market consumers, when surveyed, place greater emphasis on sustainability compared to those in mature markets. This is particularly true for respondents from India and China, which together, account for more than a quarter the global population:

The State of Fashion 2017 report, citing Global Lifestyle Monitor, reveals that 65% of consumers in emerging markets actively seek out sustainable fashion versus 32% or less in mature markets , a finding backed up by Mastercard’s 2015 Ethical Shopping Survey. Coming in at 78% of respondents for India and 65% for China, sustainability is by and large a key consideration for consumers in these two hotspots.

Even where sales grew eight times faster (in developing countries like Brazil, China, India, Mexico and Russia) consumers are still more reserved in their spending than their developed market counterparts. “Even after this increase, the average developing-country resident purchases a fraction of the clothing that his or her developed-world counterpart buys each year,”McKinsey reports.

Now, I admit, there’s an attractiveness to this thesis. I don’t know very much about China, although I have visited several times.

But I do know a bit about India– which has a very different attitude toward waste than prevails in the US (as I’ve previously discussed in this post, Waste Not, Want Not: Right to Repair Laws on Agenda in Some States. Wasting food is considered to be sinful, a healthy repair culture flourishes, and items are typically reused and repurposed– including used clothing, which is either handed down, or often made into quilts such as kantha, the celebrated stitch painting of Bengal (see this luscious exhibition catalogue, Kantha: The Embroidered Quilts of Bengal).

In fashion area, India still maintains a certain separateness. To be sure, global brands are  present, some are thriving, and demand for them is increasing– particularly among younger city residents. Yet overall, Indian producers of traditional textiles are also flourishing. Indian women, for example, still wear saris– particularly for more formal occasions– or basic salwar kameez– the far-more-attractive and climate appropriate version of Hillary’s pant suits. And what Indian male politician would be willing to surrender his Nehru jacket– the ubiquitous uniform throughout the country for politicians? India has for millennia, led the world in producing the finest quality textiles, and people retain an awareness of, and appreciation for quality. Tailoring is still widely available, and reasonably priced, so clothing fits (which is by no means the norm in the US and many parts of Europe, as discussed in What If Clothes Were Made to Fit Bodies?)

Unfortunately, as much as I’d like to hope that consumers in emerging markets might herald a shift away from the current destructive, wasteful patterns, I have several concerns with the Forbes thesis.

My first concern, as with other similar arguments– e.g., millennials consume fewer goods and appreciate sustainability more– that are based in an expected shift in who is consuming, that still leaves us very much with the status quo, whereby consumers consume, and waste, too many textiles in the present day.

To follow on from that, there is a considerable leap that is being made here between what people say they value– and what they actually buy– as I’ve discussed in this post, Fashion Industry Dogged By Sustainability Concerns. Some companies have developed successful models that make just such a leap, but they have tended to be small, niche operators. I’m just not sure that consumers– whether in emerging markets are elsewhere– will widely be willing to pay up for sustainable fashion. As I wrote previously:

Of course, there’s an obvious disconnect here, between what even these consumers say they’re worried about– sustainability– and what they’re willing to pay for. Nonetheless, some companies have already latched onto such concerns, by building communities that cater to these customers– seemingly successfully, at least in the short-term– as discussed further in this piece, Community Is Core to Next-Gen Brands. Other designers have explicitly developed eco-friendly alternatives to the prevalent fast fashion model, as discussed further in this South China Morning Post piece, Sustainable K-fashion finds fans in Korea as Seoul designers adopt eco-friendly strategies.

And finally, even if such a leap can be made between what people say they value and what they purchase, are such attitudes stable? I wonder whether consumer attitudes in emerging markets will stay as they are, or whether people will become more wasteful as they become richer.  Maybe waste is a “privilege” that arises from wealth– an admittedly unsustainable one– but one that it’s not altogether surprising to find in mature, wealthier economies.  Those with less simply can not afford to be wasteful. As more people in India and China move into the middle class, will they still maintain their current, more sustainable attitudes and purchasing patterns?Or will they, too, jump on the waste train, and help further despoil the planet.

I just want to close with an alternative scenario, one spelled out by McKinsey in Style that’s sustainable: A new fast-fashion formula. The following graphic illustrates what the impact would be– on CO2 emissions, water use, and land use– if 80% of emerging markets consumers achieve Western per capita consumption levels for clothing. 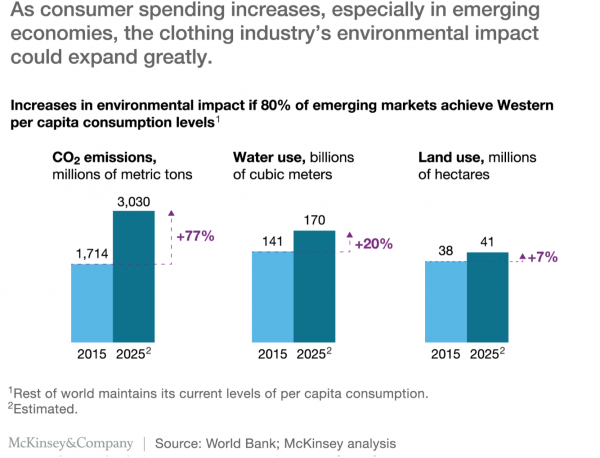 I think this Forbes piece exemplifies a certain type of magical thinking. This time, the emerging markets fairy waves her magic wand, and ethical consumers rescue the planet from the consequences of fast fashion folly, by consuming and wasting less.  That result certainly needs to happen, but it needs to happen soon, and among Western and emerging market consumers alike. The planet cannot sustain current, let alone increased, levels of CO2 emissions, water use, and land use.