Yves here. While the plural of anecdote is not data, I wonder whether readers in the UK will agree with this assessment. The Leave pitch that the UK would spend £350 million more a week on the NHS if it quit the EU, was widely seen as effective. That provides a bit of support for the idea that individual financial insecurity played a big role the vote.

This theory provides substantiation for the view that Thatcherism played a major role in the Brexit vote. Neoliberalism produces more inequality. More unequal societies are less happy ones, by virtue of having weaker social bonds and less security. Even if you are very well off and at no risk of starving, if you take significant economic losses, you can no longer mix with your former social circle. What they do on a routine basis will no longer be in your budget. Worse, you might have to take drastic steps like taking your kids out of pricey schools and moving into a smaller house.

And notice that this article claims that subjective feelings about one’s own situation was the big driver. That does not mean individuals who were unhappy were objectively not well off. As Scott said via e-mail, on a completely different topic, “I get regular emails from a bunch of guys who seem to genuinely feel that 50 year old  guys worth between $15 and $100 million are the most put upon demographic in the country, and that they’re under constant siege by the more numerous, fortunate, and darker-skinned among us.”

There has been much debate on the determinants of the vote for Brexit. This column uses newly released data from the Understanding Society study to examine the characteristics of individuals who were for and against Brexit. Unhappiness contributed to the vote to leave the EU, but this was driven by feelings about individual financial situations rather than a general dissatisfaction with life. Brexit does not appear to have been caused by the old – only those under the age of 25 were substantially pro-Remain.

There is a very wide debate on the determinants of the vote by British citizens to leave the EU. In particular, the idea that this vote reflects discontent and disillusionment has been widely discussed in the UK and European media. Furthermore, large numbers of newspaper and TV journalists have suggested that the decision to leave the EU was forced on the country by special groups (particularly old voters swamping the views of the young, and discontented citizens swamping the views of others).

Accordingly, there is already a number of academic writings on the topic. Some have emphasised the concept of a divided nation (e.g. Dorling 2016). Hobolt and de Vries (2016) explore the scepticism towards EU values, and Ginsburgh et al. (2017) the probable cultural and economic repercussions of Brexit. The majority of the early empirical studies that investigate the explanation for the Brexit vote have pointed to economic forces and immigration-related factors (e.g. Clarke et al. 2017, Goodwin and Milazzo 2017), although interestingly Becker et al. (2017) argue that exposure to immigration was not particularly important but that economic forces and deprivation were powerful. Other contributions emphasise the effect of education – Hobolt (2016) showed that Brexit was favoured by the less-educated, the poorer and older voters, and those who expressed concerns about immigration and multi-culturalism. Along similar lines, Goodwin and Heath (2016) attributed Brexit more specifically to the ‘left behind’, as caused by poverty and a general lack of education and opportunities.

There is a literature within quantitative social science (including Di Tella and MacCulloch 2005, and Liberini et al. 2017a) that uses ‘happiness’ data to try to understand political decisions. Building on this literature, in a new paper we analyse the determinant of the answer “Leave the European Union” to the question “Should the United Kingdom remain a member of the European Union or leave the European Union?”, asked in the last wave of the Understanding Society data set between January and June 2016, and reporting information on approximately 8,000 citizens (Liberini et al. 2017b). Our analysis produces two results that currently may not be widely understood.

The Effects of Unhappy Feelings

First, there is evidence in our study that unhappy feelings contributed to Brexit.  However, the key channel of influence was not through general dissatisfaction with life; it was through a person’s narrow feelings about his or her own financial situation.

How can ‘discontent’ be incorporated into a statistical study? We focus especially on the following two questions that are asked of respondents in the Understanding Society survey.

The first question asked about overall life-satisfaction: “On a scale of 1 to 7 where 1 = ‘Completely Dissatisfied’ and 7 = ‘Completely Satisfied’, please tell me the number which you feel best describes how dissatisfied or satisfied you are with the following aspects of your current situation”.

The second question asked about people’s feelings about their financial situation: “How well would you say you yourself are managing financially these days? Coded from 1 (Living comfortably) to 5 (Finding it very difficult)”.

General dissatisfaction (first question) is predictive of a pro-Brexit position to a limited extent. We find that it was only the small number of completely dissatisfied citizens (that extreme answer is given by only 2% of the UK population) who wish disproportionately, in a statistically significant way, to leave the EU.

On the other hand, Figure 1 illustrates graphically a powerful pattern in the effects of respondents’ feelings about their finances (second question) on the leave vote. Unlike in the pattern for the life-satisfaction scores, here a steady increase in the coefficients is noticeable. Moving to the right across the chart, people feel steadily less happy with their financial situation, and then are progressively more likely to favour the Leave position.  The implied sizes are fairly substantial – for example, UK citizens who feel things are very difficult financially are approximately 13% points more likely to be in favour of leaving the EU than those who feel their finances are comfortable. Overall, our statistical analysis suggests that financial feelings are amongst the strongest correlates with citizens’ views on the desirability of Brexit. 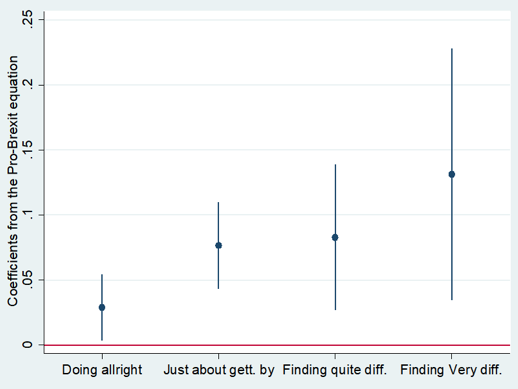 Notes: as calculated from a Brexit equation, Column 2 of Table 3 in Liberini et al. (2017b). 95% CI shown. The vertical axis is a measure of the probability of wanting to leave the EU.

The Effect of Age

Despite what some commentators have suggested, based on our estimates Brexit was not caused by the old.  Looking at Figure 2 – featuring in the vertical axis a measure of support for Brexit – we note that the Understanding Society data set suggests that only the very youngest UK citizens (those under the age of 25) were substantially pro-Remain.  Between their late-20s and their 70s, people who live in the UK have almost indistinguishable views on the desirability of EU membership. Therefore, the data suggest that Brexit was not, in a general sense, caused by old people.

Figure 2 Age profile of those wishing to leave the EU 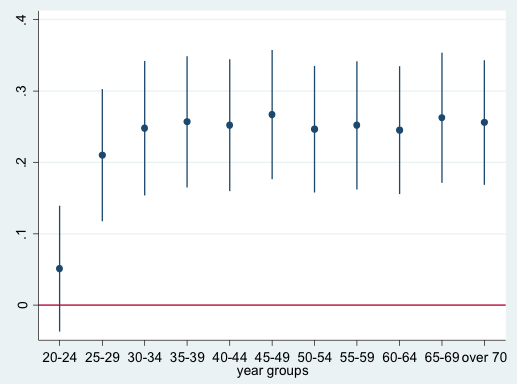 Notes: as calculated from a Brexit equation in Liberini et al. (2017b), Column 1 of Table 3. 95% CI shown.The effect of other individual characteristics

Some other patterns emerged. Consistent with the rest of the literature, we find a strong association between having high qualifications and favouring Remain. Having a university degree or equivalent made people more likely to vote Remain (by 16%). People with children are less likely to want to leave the EU (by 4%). There is also evidence of an ethnic influence – those who classify themselves in the survey as ‘white British’ are somewhat more likely to vote for Brexit (by 6%). Interestingly enough, being unemployed has only a small positive or no effect on the decision to leave. Being married has no significant effect.  Finally, and perhaps against some commentators’ intuitions, living in a rural area has no discernible consequences. There were also regional effects, and some evidence, in the run-up to the final few weeks before the vote, of a slightly rising tendency to favour Leave.