This is Naked Capitalism fundraising week. 1440 donors have already invested in our efforts to combat corruption and predatory conduct, particularly in the financial realm. Please join us and participate via our donation page, which shows how to give via check, credit card, debit card, or PayPal. Read about why we’re doing this fundraiser,what we’ve accomplished in the last year and our current goal, more original reporting.

Yves here. An important bit of history that can’t be repeated too often: when the Clinton Administration decided to move NATO into former Warsaw Pact countries, violating a understanding made as part of the peaceful dissolution, George Kennan said it would prove to be the worst geopolitical mistake the US ever made.

Joseph Alsop and George Kennan  started the kind of Russia-hating in Washington which,  today, President Vladimir Putin, like the businessmen around him,  think of as a novelty that cannot last for long.

Alsop was a fake news fabricator, and such a narcissist as to give the bow-ties he wore a bad name. Kennan was a psychopath who alternated bouts of aggression to prove himself with bouts of depression over his cowardice. For them, Russia was a suitable target. The Washington Post was the newspaper which gave their lunacy public asylum. This, according to a fresh history by a university professor from California, started in 1947, long before the arrival in Washington of the anti-communist phobia known after the name of Senator Joseph McCarthy.

Russia-hating was an American upper-class phenomenon, cultivated in the offices, cocktail parties, clubs, and mansions of the deep state, as it emerged out of World War II. It needed a new enemy to thrive; it fastened on Russia (aka the Soviet Union) as the enemy.

McCarthyism was an American lower-class phenomenon. It focused on the loyalty or disloyalty of the upper-class deep-staters. That wasn’t the same thing as Russia-hating; Wall Street bankers, Boston lawyers, homosexuals, Jews, communists, were all the enemy. As the Senator from Wisconsin characterized it himself in 1952, “McCarthyism is Americanism with its sleeves rolled.” He implied – without a middle-class tie; certainly not an upper-class bow-tie.

Russia was not an enemy which united the two American lunacies, for they hated each other much more than they hated the Russians. The Soviet Politburo understood this better then than the Kremlin does now.

Gregg Herken’s The Georgetown Set,  is so named because it records the activities of Alsop, Kennan and several other State Department, Central Intelligence Agency and White House officials who lived as neighbours in the Georgetown district  of the capital city, together with Katharine (Kay) and Philip Graham, proprietor managers of the Washington Post. The district  – once a chartered city of Maryland and river port, which was absorbed into the federal District of Columbia in 1871 — was expensive, relatively speaking then; more so now. The richest of the set, including Alsop, had town houses in Georgetown, and rural retreats in Virginia, Maryland, Pennsylvania, and Connecticut.

They were a set because because, as Herken said succinctly to an interviewer,  “they got together every Sunday for supper and, basically, they ran the country from those meetings.” As the book elaborates, they thought they were running the world. With a longer time lapse in which to view the evidence,  they were also losing it.

Newspapers exposed in the book for collaborating in all the deceits, failures and war crimes of the history have reacted by calling Herken’s effort a “provincial corner”.   The New Yorker opined  that the Russia-hating and Russia war-making which Herken retells are dead and gone. “The guests at the Sunday soirées no doubt felt that they were in the cockpit of history. But the United States is a democracy, not a Wasp Ascendancy… There was once an atmosphere of willingness that made a system of bribes and information exchanges seem, to the people involved, simply a way of working together for a common cause in a climate of public opinion that, unfortunately, required secrecy. No one got rich from the arrangement. People just lost track of what was inside their bubble and what was outside, as people tend to do. Vietnam was the reality check. ‘I’ve Seen the Best of It’ was the title Alsop gave to his memoirs. Things hadn’t been the same since, he felt. He was right about that, and we should be thankful.” In the New York media business these days it’s possible to publish a selfie of pulling your own leg.

The Washington Post has deflected the indictment against itself by describing Herken’s work as “a very strange book…(A) a rehash of the history of the Cold War as experienced in certain Washington circles and (B) an almost obsessive recapitulation of the life and journalism of Joseph Alsop.” Alsop is dismissed as unworthy of a history at all because he was “utterly repellent: arrogant, patronizing, imperious, uninterested in anyone except himself.”

That’s the truth about Alsop. The truth about the Washington Post is buried in this line by the Post’s books editor about the hand that fed him: “it must be very hard for people who did not live through the ’50s and ’60s to understand how obsessed the American people were with the threat from Moscow.” That line appeared in print on November 7, 2014. It was already history, that’s to say, a misjudgement. How monumentally mistaken is obvious now.

In covering the period from 1946 to 1975, Herken’s research does repeat much of the history of the  Cold War which has been told elsewhere. It starts on February 22, 1946, the date of the “Long Telegram”, No. 511 — Kennan’s despatch from the US Embassy in Moscow to the State Department, setting out his strategy  of so-called containment and much more besides. Read it in the declassified original.  Most of the war-fighting and other war crimes which the telegram set in motion under Kennan’s 1948 rubrics, “organized political warfare” and “preventive direct action”,  are reported in Herken’s book; so too are  Kennan’s frequent funks, failures of conviction, reversals of judgement, and pleas for help.

The book ends on December 30, 1974, the date of Alsop’s last column. Alsop concluded with the line: “I have never known the American people to be really badly wrong, if only they were correctly and fully informed.”

Herken shows how self-deluded and professionally delusional that was — not because of Alsop’s  character but because of his sources. Herken documents that they ran upwards from foot-soldiers (also lubricious sailors) to presidents and cabinet secretaries. Herken doesn’t think the same of Kennan, who gets to walk off stage, aged 101, sounding more sceptical of overthrowing Saddam Hussein than he ever was in his prime and in power to direct schemes of what we call state terrorism today.

What is fresh about the sources is that Herken has had access to the private notes, letters and diaries of the Alsop family; the Kennan diaries and letters; and the private papers of Frank Wisner, the first director of covert operations against Russia. Wisner went mad and killed himself, as did Graham. There’s no doubt about the suicide outcome of their madness.

In the case of the mad ex-Defence Secretary James Forrestal his fatal jump from the window of the Navy hospital in Bethesda, Maryland, in May 1949 might have been a homicidal push.  Herken concludes that Forrestal’s death was “the first senior-ranking American casualty of the Cold War.” Herken thinks of their madness as anomalies. The history shows they were normalities.

Missing from this history is any reference to official documents, now declassified; 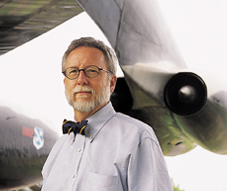 press reporting of the time; or interviews with veterans of the same events but on other sides – Russian and Soviet; British; German; French; Polish; Vietnamese; Chinese. This isn’t so much a fatal flaw in Herken’s (right) book as the reason why his history is repeating itself today. Call this a variation on Karl’s Marx’s apothegm that history starts as tragedy and repeats itself as farce. Herken’s blindness to this is as revealing as the Washington Post’s madness, not yet as suicidal as its former proprietor’s, today.

So mesmerized is Herken by the moneyed backgrounds of his subjects and sources, and by the amount of black cash from the US Government they spent on operations, he forgets to report what they did to fill their own pockets.  The claim by the New Yorker that “no one got rich from the arrangement” – Alsop’s fake news fabrications – is false, but Herken touches only in passing on how they made (or kept) their money.  Alsop’s column, for example, was sold to 200 newspapers, and at one time claimed a readership of 25 million. His family inheritance is recorded, but not its annual revenue value. Alsop’s payola included silk shirts from Alfred Kohlberg, a textile importer from China who backed Chiang Kai-shek against Mao Tse-tung, as did Alsop.  Alsop’s patrons included Convair (General Dynamics), the company building the US Air Force Atlas missile for procurement of which Alsop reported fictions about Soviet missile strength.

In the US power which Alsop, Kennan and Wisner believed without hesitation, Herken is not less a believer. “Anything could be achieved”, Herken quotes a New York Times reporter quoting Wisner. When the US force multiple changed, however, and US allies or agents were outgunned, outspent, outnumbered, or outwitted,   they were unable to acknowledge miscalculation, attributing  defeat instead to the superior force or guile of their adversaries, especially the Russians.

This is madness, and there is good reason for recognizing the symptoms again. In 1958, when Herken says Wisner’s paranoid manias were becoming obvious to his friends and colleagues, “Frank put forward a theory that the careless comment which had gotten George Kennan kicked out of the Soviet Union was evidence the Soviets had succeeded in an area where the CIA’s own scientists had failed: mind control. Some agency hands alleged that Wisner attributed his own increasingly bizarre behaviour to the Kremlin’s sly manipulation.” 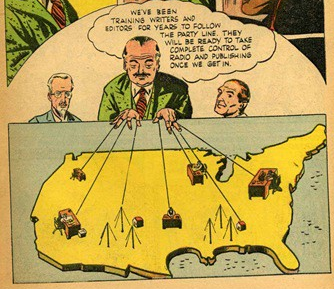 A cell from the comic “Is This Tomorrow? America Under Communism”(1947). Test your mind, read more: https://archive.org/details/IsThisTomorrowAmericaUnderCommunismCatecheticalGuild

From Washington in 1958,  fast forward to Washington in 2017; for mind control and sly manipulation,  read Russian hacking and cyber warfare. From Wisner’s and Kennan’s balloon drops of leaflets and broadcasts by Radio Free Europe,  fast forward to Russia Today Television and Russian infiltrations of  Twitter, Google, the Democratic National Committee,  and the Trump organization.

It stands to reason (ahem!) that if you think what the US Government and its journalists were doing then was mad, you are might conclude that what they is doing now is just as mad – and not very  different. When the incumbent president and his Secretary of State publicly call for IQ tests on each other, all reason has failed. “The nation,” as Alsop had written, “had simply taken leave of all sense of proportion.” That was in March 1954.

If you fast forward to now, there’s one difference. Today the lunatic Russia warfighters don’t retire. They also don’t fade away. Today’s sleek successors to mad Wisner and mad Graham sleep easily in their beds a-nights. For what they’ve done and do, they wouldn’t dream of taking shotguns to their heads.

Herken retells the story of the campaign Alsop waged against McCarthyism at the State Department, against McCarthy himself, and the vulnerability Alsop himself presented until the Boston lawyer Joseph Welch put an end to McCarthy on June 9, 1954:  “Have you no sense of decency, sir, at long last?” Welch famously said. “Have you left no sense of decency?”  The recurring history reveals why, even if there are plenty of people to say the same thing today to the Washington Post, New York Times, Hillary Clinton and Donald Trump, the madness will continue repeating itself.