Yves here. On the one hand, as someone who is getting to be pretty long in tooth, I’m not sure about calling un and under-employed older workers “spare”. But when the alternative is being thrown on the trash heap, maybe that isn’t so unflattering.

Even though this analysis is from Australia, most of if not all of its finding would almost certainly prove out in the US. However, there is a whole ‘nother set of issues here. Australia is 85% urban, with most of the population living in or near four large cities. So its labor mobility issues are less pronounced than here. Moreover, a lot of the whinging in the US about worker shortages, as even readers of the Wall Street Journal regularly point out in its comment section is:

2. Not being willing to train less skilled workers, as companies once did as a matter of course

Today, the Regional Australia Institute (RAI) has warned that Australia is facing a pension crisis unless employers stop their “discrimination” against older workers. From The ABC:

[RAI] has warned the Federal Government’s pension bill would rise from $45 billion to $51 billion within three years, unless efforts were made to help more mature workers gain employment, particularly in regional communities.

“We hear that there is a lot of people who would like to work, who would love to stay in the workforce either part-time or full-time even though they’re in their late 50s, 60s and even into their 70s,” he said.

“But we’re not doing a very good job of giving them the training, giving them the incentives around the pension, and working with employers to stop the discrimination around employing older workers”…

“It basically means you’ve got a lot of talent on the bench, a lot of people who could be involved and contributing who are sitting around homes and wishing they were doing something else,” he said…

Mr Archer said as the population aged the workforce shrank, and that risked future economic growth.

“[When] those people are earning [an income], their pension bills will either disappear or be much lower and the government will get a benefit from that.”

For years the growth lobby and the government has told us that Australia needs to run high levels of immigration in order to alleviate so-called ‘skills shortages’ and to mitigate an ageing population. This has come despite the Department of Employment showing that Australia’s skills shortage “remains low by historical standards” and Australia’s labour underutilisation rate tracking at high levels: 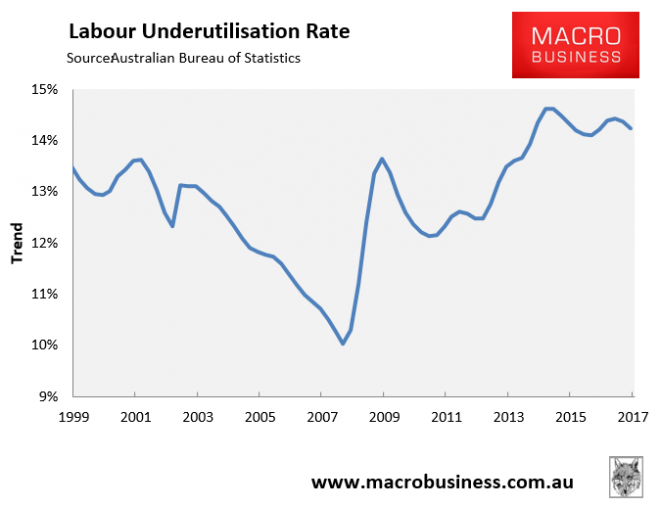 Economic models are often cited as proof that a strong immigration program is ‘good’ for the economy because they show that real GDP per capita is moderately increased via immigration, based on several dubious assumptions.

The most dubious of these assumptions is that population ageing will necessarily result in fewer people working, which will subtract from per capita GDP (due to the ratio of workers to dependents falling).

Leaving aside the fact that the assumed benefit to GDP per capita from immigration is only transitory, since migrants also age (thereby requiring an ever-bigger immigration intake to keep the population age profile from rising), it is just as likely that age-specific workforce participation will respond to labour demand, resulting in fewer people being unemployed. This is exactly what has transpired in Japan where an ageing population has driven the unemployment rate down to only 2.8% – the lowest level since the early-1990s: 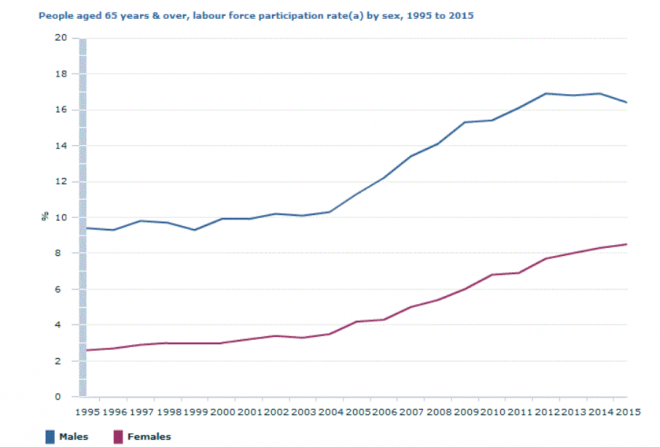 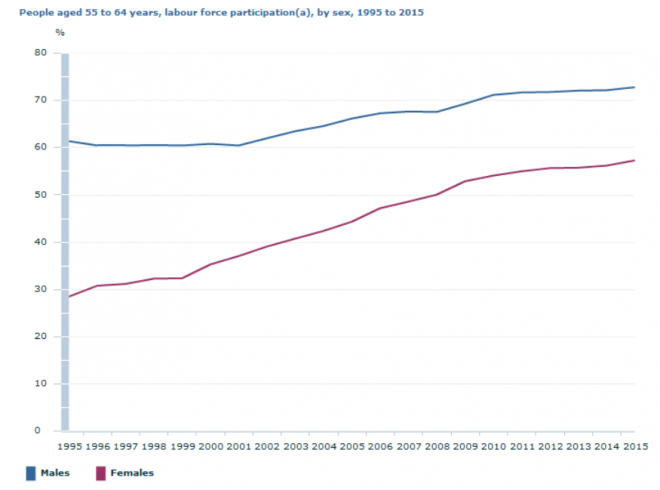 Clearly, however, there is much further scope to boost workforce participation among older workers.

Rather than relying on mass immigration to fill phantom ‘labour shortages’ – in turn displacing both young and older workers alike – the more sensible policy option is to moderate immigration and instead better utilise the existing workforce as well as use automation to overcome any loss of workers as the population ages – as has been utilised in Japan.

It’s worth once again highlighting that economists at MIT recently found that there is absolutely no relationship between population ageing and economic decline. To the contrary, population ageing seems to have been associated with improvements in GDP per capita, thanks to increased automation: 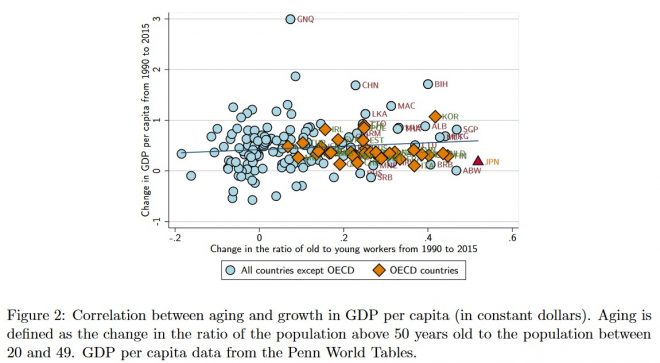 If anything, countries experiencing more rapid aging have grown more in recent decades… we show that since the early 1990s or 2000s, the periods commonly viewed as the beginning of the adverse effects of aging in much of the advanced world, there is no negative association between aging and lower GDP per capita… on the contrary, the relationship is significantly positive in many specifications.

The last thing that Australia should be doing is running a mass immigration program which, as noted many times by the Productivity Commission cannot provide a long-term solution to ageing, and places increasing strains on infrastructure, housing and the natural environment.

The sustainable ‘solution’ to population ageing is to better utilise the existing workforce, where significant spare capacity exists.