Yves here. We wrote about this right after Brexit, using a 2014 post by Philip Pilkington. The pound fell during the crisis, yet the UK did not see an improvement in its balance of trade. As we pointed out:

As most readers know a depreciation of a currency is not always a bad thing. In normal circumstances cheaper currency will make imports more expensive and lead to lower standards of living but it will also make exports cheaper and this will normally lead to more job creation. That’s the theory anyway. If it works out this way a depreciation might help rebalance a current account deficit. The UK could sure do with some rebalancing. It’s current account deficit is now a whopping 5.2% of GDP, the highest it has ever been since the statistics came online.

I’m posting this article that Philip Pilkington wrote in 2014 because it highlights some interesting things about the UK current account and the sterling. Pilkington argues that the sterling is only propped up by financial inflows into the City of London and that any scare to these financial flows can easily result in a sterling crash (he made a similar argument in this Guardian article which came out around the same time). He argues that the UK is not like the US which, because of its reserve currency-issuing status, can run very large current account deficits with little or no consequences for the dollar. The sterling crash after the Brexit confirms his argument: all it took was a big scare.

But this is where the problems come in. As Pilkington shows, last time the sterling took a big hit in 2007-08 export prices didn’t fall and make the UK more competitive, they rose and made the UK less competitive! The reason? Global supply chains. The inputs that UK companies use to make exports are themselves imported. When the sterling falls, the inputs rise in price so the firms have to raise the prices on their export goods. As Pilkington points out this means that all the adjustment must take place on the side of real incomes: that is, peoples’ living standards must fall through rising prices.

By Nicholas Branigan, a former research analyst at Bruegel. Originally published at Bruegel

The Pound Sterling depreciated by 14% against a basket of world currencies in the four months after the referendum vote to leave the EU. A number of pundits claimed that this would improve the UK trade balance and boost the economy. But the data do not show any visible improvement in the trade balance to date. Could it be that currency depreciations have less impact on trade balances than before?

The British Pound has lost ten percent of its value since the UK voted to leave the EU. The general wisdom is that this fall should make imports more expensive and exports cheaper, reducing the UK’s trade deficit. But there is still little evidence that such a trend is emerging. Indeed, could it be that we are witnessing a breakdown in the relationship between exchange rates and trade balances around the world? 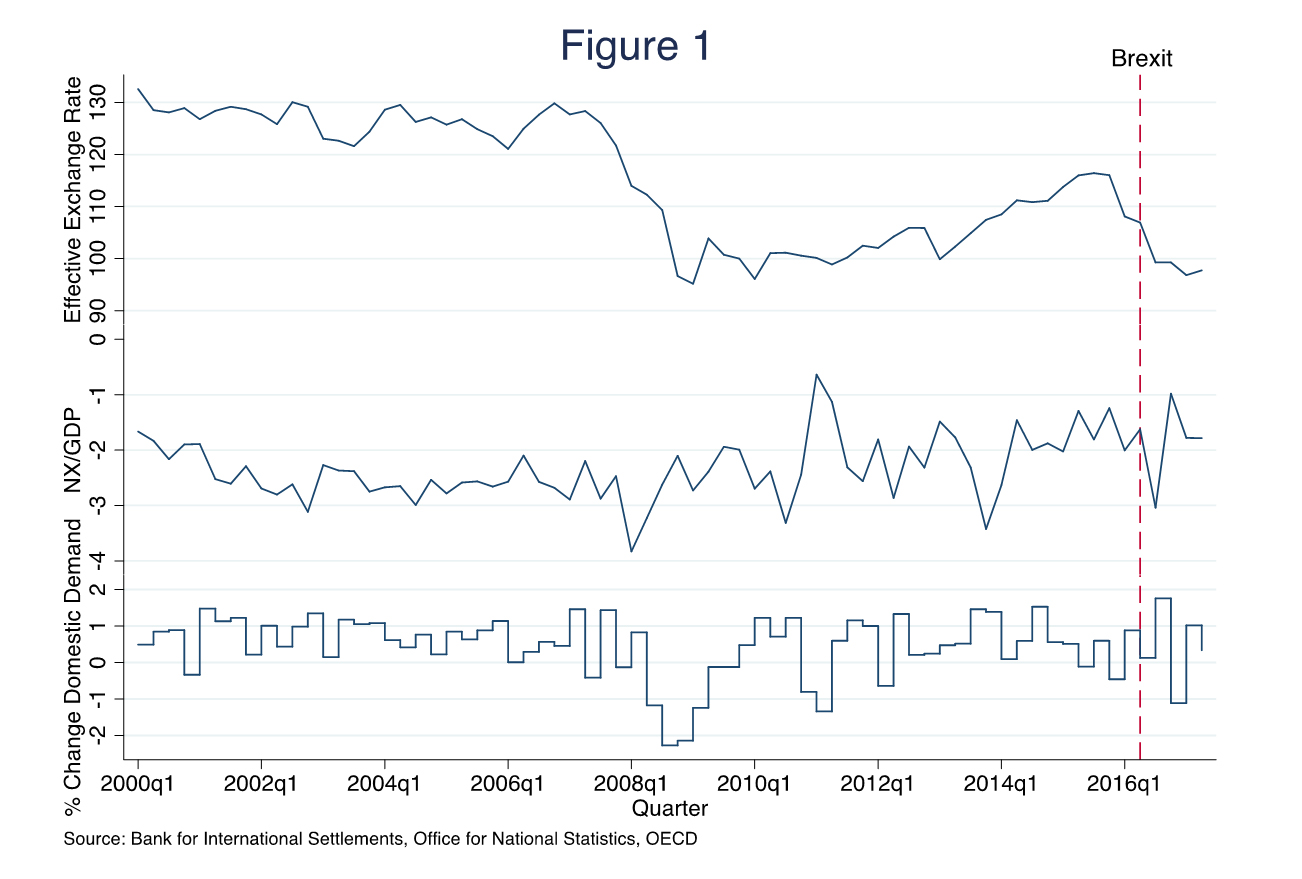 How can we explain this apparently weak relationship between the exchange rate and trade balance? The literature suggests that low pass-through to imports and global value chain (GVC) participation may be the cause. The level of pass-through to imports describes how completely import prices respond to exchange rate fluctuations. This matters because depreciations are expected to improve the trade balance by provoking shifts in expenditure — away from suddenly-more-expensive imports in the home country and toward now-less-expensive exports from the home country in foreign markets. However, in a low pass-through environment imports may not become more expensive following a depreciation, disrupting the expenditure switching effect.

Bussière, Chiaie and Peltonen find that emerging market economies may be more likely to engage in local currency pricing. They also observe that the composition of a country’s imports is related to its rate of pass-through. Together, these findings suggest that the increasing importance of emerging economies in global trade may be depressing pass-through to imports. Similarly, Marazzi et al. explain falling pass-through to imports for the US by citing increasing local currency pricing among the Asian newly industrialising economies and an increasing import presence of China, whose exporters, Goldberg and Tille find, invoice exports to the US “almost exclusively” in dollars.

The credibility and effectiveness of a central bank at keeping inflation under control may also affect pass-through to imports. When exporters have reason to expect that prices will increase predictably and moderately each year, they may be less likely to pass exchange rate fluctuations through to import prices. Taylor first conjectured that monetary policy that is successful at delivering low inflation decreases rates of pass-through by reducing the “expected persistence of cost and price changes.” And several researchers have since reinforced Taylor’s conclusion: Choudhri and Hakura, Devereux, Engel, and Storgaard, Gagnon and Ihrig, Campa and Goldberg, Caselli and Roitman, and Carrière-Swallow et al.

The two previously discussed explanations for low pass-through seem relevant to the UK. Exporters to the UK engage in local currency pricing. Goldberg and Tille find that 33% of imports were invoiced in Pound Sterling in 2002. The Bank of England is also a credible monetary authority and the UK has experienced stable inflation over the past two decades. Since 1995, CPI monthly inflation has averaged 2.0% with a standard deviation of 1.06%. And during only two months of that period did inflation exceed 5%.

Increasing global value chain (GVC) participation may also be disrupting the link between the exchange rate and the trade balance. Firms that import inputs are GVC participants. In the case of a deprecation, their input costs rise. This effect hurts their competitiveness, counteracting the boost provided by a depreciated exchange rate. Amiti, Itskhoki, and Konings study Belgian exporters and observe that the more a firm imports inputs, the less its prices in foreign markets respond to the exchange rate.

UK firms are dependent on GVCs. In 2014, the import content of the UK’s gross exports, according to the OECD, was 21.9% — higher than the U.S. (15.3%) and Japan (18.2%), though lower than Germany (25.4%), Italy (25.4%), and France (26.3%). This suggests that many firms will face higher input costs following a depreciation. A Pound Sterling depreciation may thus take a toll on UK exporters,  through lower margins or higher prices, and mitigate any boost to the trade balance.

The literature examining whether falling pass-through to imports and rising GVC participation have fractured the link between exchange rates and the trade balance is recent and has failed to yield consistent and conclusive findings. Ahmed, Appendino, and Ruta find that, over time, the elasticity of manufacturing volumes to the real effective exchange rate has decreased. They attribute 40% of this fall to a rise in GVC participation. They also find that increasing GVC participation is associated with a smaller effect of depreciation on export volumes.

Leigh et al. find essentially the opposite. By estimating trade elasticities for 60 economies, they conclude that a 10% real depreciation boosts net exports by, on average, 1.5% of GDP. They also find no evidence of a weakening relationship between the trade balance and the exchange rate over time. The authors note that when the tests performed in Ahmed are repeated by deflating export volumes not with the CPI, as in that study, but with export prices, “there is little evidence of decline in export elasticities.” The approach employed in Leigh, however, is also not free from critique. Mumtaz, Oomen, and Wang find that using aggregate data to estimate pass-through, as Leigh does, can result in significant overestimation from aggregation bias.

These observations are useful for dialogue, but they are incomplete. In the absence of robust empirical analyses, it remains unclear whether the exchange rate has genuinely become disconnected from the trade balance in the UK, what may explain this, and whether this represents a broad trend in advanced economies. And, until a greater literature on this topic emerges and begins to clarify the opposing conclusions of Ahmed and Leigh, these questions will remain unanswered. What is clear, however, is that the drop in Pound Sterling has so made the UK a poorer country without any visible improvement in the trade balance.