By Georg Zachmann, a Senior Fellow at Bruegel and a member of the German Advisory Group in Ukraine and the German Economic Team in Belarus and Moldova. Prior to that he worked at the German Ministry of Finance and the German Institute for Economic Research in Berlin. Originally published at Bruegel

Brexit promises pain for Ireland that could be cut off from the EU internal market and be left exposed to market instability in the UK. Georg Zachmann assesses the scale of the possible damage for Ireland, and how the UK and EU might use the special energy relations on the Irish island to commit to a pragmatic solution.

Ireland is the EU member state that will be most impacted by Brexit. A particular case in point is the energy sector. Currently the Irish electricity and gas markets’ only physical connections are with the UK. So, after Brexit, these Irish markets would not be connected with the EU anymore. This has material implications.

Currently, Ireland imports about half of its gas consumption through the UK (the rest is produced domestically). While there is no reason to believe that these gas flows will be stopped after Brexit, there might be three possible adverse effects for Irish gas customers:

The same considerations apply for the electricity sector as for the gas sector. While the trading volume in electricity is smaller (as electricity is largely generated and consumed domestically), the long term implications for this sector are likely even bigger than for gas. Electricity markets are complex markets based on thousands of pages of rules on the obligations of individual players and the specifications of the traded products. The EU is rolling out a market design to all its member states to ensure the joint optimisation of the EU electricity system. That is, if the wind is blowing stronger in Portugal, a gas-fired power plant in the Netherlands might be signalled to reduce its production. If the UK is unable to stay in the internal market, Ireland would also be decoupled from it. Given the increasing role of renewables in the EU as a whole, and the unique wind patterns on the Irish West coast in particular, situations in which Ireland might want to export or import large volumes of cheap electricity on short notice will become more frequent. Consequently a decoupling of Ireland from the internal electricity market could imply a greater need to invest in the back-up capacity in Ireland, lower revenues for wind power exports, and hence more volatile and higher electricity prices for consumers. 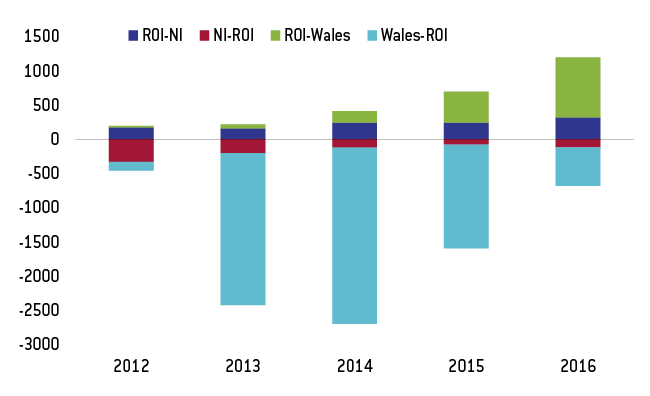 The Special Case of Northern Ireland