Several news outlets picked up on a Bloomberg story last week, touting the benefits of burning H & M clothes rather than fossil fuels to supply a Swedish power plant.

As Bloomberg reports in A Power Plant Is Burning H&M Clothes Instead of Coal:

The combined heat and power station in Vasteras, northwest of Stockholm, is converting from oil- and coal-fired generation to become a fossil fuel-free facility by 2020. That means burning recycled wood and trash, including clothes H&M can’t sell.

“For us it’s a burnable material,” said Jens Neren, head of fuel supplies at Malarenergi AB, a utility which owns and operates the 54-year-old plant about 100 kilometers (62 miles) from Stockholm. “Our goal is to use only renewable and recycled fuels.” 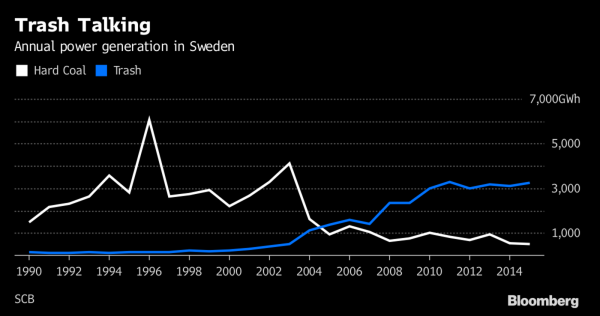 H & M– a major fast fashion player that has taken some steps toward sustainability– was at pains to make clear that the clothes sold to the power plant were defective. Again, according to Bloomberg:

“H&M does not burn any clothes that are safe to use,” Johanna Dahl, head of communications for H&M in Sweden, said by email. “However it is our legal obligation to make sure that clothes that contain mold or do not comply with our strict restriction on chemicals are destroyed.”

This initiative seems to be a twofer: it reduces reliance on fossil fuels, and disposes of waste– the latter a huge and growing problem, as made clear in this recent Washington Post piece, Drowning in garbage, discussing waste disposal in six major cities, Jakarta, Tokyo, Lagos, New York, Sao Paulo and Amsterdam.

To tease the latter issue out further,  I’ve written before on the The High Hidden Costs of Fast Fashion, especially to the environment. So, burning these items is probably better than dumping them on third world consumers– where they have disrupted domestic textile markets, at the expense of local economic activity and employment. And it’s also an improvement on burying them in landfills, where they contribute to global warning by generating methane– both points I discussed further in the piece cited above.

But, that doesn’t mean that using clothes– defective or as they may be– to fuel power plants is costless.

For starters, making these clothes consumes fossil fuels, as well as often consumes massive amounts of water.  Moving away from fast fashion– and other wasteful consumption patterns– toward more sustainable practices, appears to be a necessary step toward mitigating climate change.

Additionally, as Oilprice.com reports in Sweden Burns H&M Clothes As Fuel, clothes and other non-fossil fuels are shipped from countries, to the Swedish plants– thus no doubt requiring the use of fossil fuels to transport this “waste”. A further problem is that the burning clothes generates its own waste– that includes hazardous components, which must be disposed of in landfills:

As of 2013, Sweden was importing rubbish from other countries in order to feed its hungry waste-to-energy incineration power plants. Each year the Scandinavian country imports 80,000 tons of garbage, mostly from Norway, to fuel homes and businesses. Norway pays Sweden to take away its excess refuse. Sweden then burns it to create electricity and heat, and then sends the ashes left behind by the incinerated waste, and which contain many highly polluting toxins, back to Norway for disposal in a land fill.

Note that the transport of the incinerated waste back to the country of origin itself consumes even more fossil fuels. This environmental cost will likely increase, as Sweden looks farther afield for fuel for its incinerators. Again, according to Oilprice.com:

Catarina Ostlund, the senior advisor to the Swedish Environmental Protection Agency, believes that a new country should be used to provide the extra garbage needed. Norway itself is already very clean, with its own developed recycling sector. She suggests to Public Radio International that “instead we will get the waste from Italy or from Romania or Bulgaria, or the Baltic countries because they landfill a lot in these countries. They don’t have any incineration plants or recycling plants, so they need to find a solution for their waste.”

As I was compiling today’s Links, a couple other approaches to waste disposal caught my eye. But before I mention  those, I want to point readers back to another post I wrote earlier January of this year, Waste Not, Want Not: Right to Repair Laws on Agenda in Some States, which discusses the EU’s more comprehensive approach to waste management, focussed on its circular economy initiative:

One element of this is an ambitious ‘circular economy’ package. Proposed in 2014, The European Commission in May 2015 launched a public consultation on this initiative for increasing resource efficiency, and adopted the package in December of the same year. This policy was motivated by a conscious decision to replace the ‘take-make-consume-dispose’ model of how resources are used and consumed (with some minor tweaks to promote for end-of-life-cycle recycling for some inputs).  EU policymakers appreciate that as the world’s population approaches 9 billion people, the prevailing wasteful linear model of resource consumption results is no longer sustainable. The circular economy alternative instead considers the entire life cycle of a product, and seeks to reduce waste by various means, including reducing materials used in products; promoting durability and thereby extending the useful life of a product; practicing ecodesign (and so facilitating easier maintenance, repair,  or remanufacturing); and promoting waste reduction by minimizing recycling costs and encouraging reuse.

That post delves into the circular economy model in greater detail, so I’ll not repeat any more of its points here. But the key takeaway is that the problem of waste disposal– and some of the related issues of climate change due to overconsumption– would be greatly mitigated if the EU approach succeeds and is adopted more broadly beyond its borders.

I’ll close with two small recent developments that provide some small cause for optimism. First, at the very small-scale level, I noticed the following puff piece in The Independent, Zero Waste: Inside London’s First Plastic-Free Shop:

But Ingrid Caldironi has taken matters into her own hands by opening the city’s first plastic free shop. Bulk Market stocks more than 300 items in the pop-up shop and it’s not just food. Alongside dried goods there’s bamboo toothbrushes, paper-wrapped toilet roll and even dog food.

“The idea came from my own needs. I wanted to support the right businesses and be able to shop without creating any waste, but there wasn’t anything like that in London,” says Caldironi.

“I always thought waste was a natural output of modern living, but it turns out to be poor design. Things aren’t designed in a circular economy mind-set yet,” she adds.

Now, not to be overly pedantic, but it surely overstates the case to call this London’s first plastic-free shop– as shopkeeping certainly flourished in London long before this shop was created. And I’m not so sure how unique nor innovative the notion of bulk purchasing, and refillable containers is in today’s UK.  I remember, while a student at Oxford in the mid-80s, refilling containers at the Body Shop, for example– and I also remember that company’s use of special plastic bags that it claimed were designed to disintegrate.

Also, other  how shops catered to students on a tight budgets by selling foodstuffs, to order, in small quantities, rather than in large prepackaged amounts. Less stuff meant less waste– something to bear in mind as food waste is a major driver of the landfill crisis.

Another piece I highlighted in todays Links, This Guy Makes Money Off Your Cigarette Butts and Flip-Flops  discusses more ambitious approach TerraCycle founder Tom Szaky is taking to waste management:

Now he’s seeking millions to help fund a bigger mission: making trash the star of a circular economy, where re-use is the norm. Inspired by the glass milk-bottle porch deliveries of yesteryear, he’s creating a durable consumer-recycling system. Think shampoo encased in gleaming stainless-steel capsules, ice cream packaged in thermos-like containers, coffee sealed in metal pods instead of plastic — all the packages to be carted off, sanitized, deconstructed and used again.

I remember well when products such as milk were delivered in reusable glass bottles– again, harkening back to my student days in Oxford, and even before that, in the ‘60s, when a milkman delivered milk to our house in Sparta, New Jersey.

Szaky’s plans go well beyond milk, however, and this and similar initiatives will be necessary if we’re to defeat the scourge of disposability, especially our reliance on single-use plastic and other wasteful packaging.