The Office of the Whistleblower of the Securities and Exchange Commission (SEC)  released its annual report last week, discussing its results during fiscal year 2017.

Sadly, the program continues to underperform. In the seven years it has been running since its establishment under the Dodd-Frank Act, a mere $160 million has been awarded to 46 whistleblowers. The agency summarized the top ten payouts in Figure 1 below. 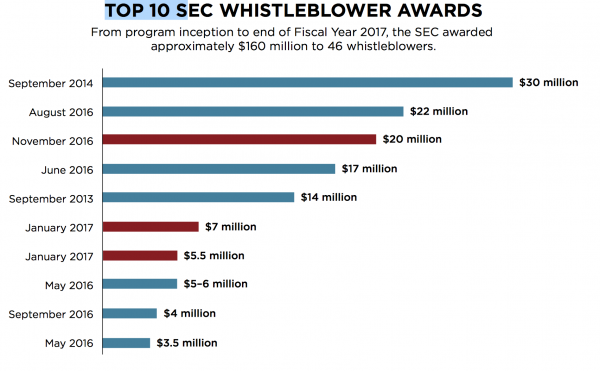 Only 46 Whistleblower awards in 7 years? During what may only be described of an epic outbreak of fraud and abuse, when we see one industry after another producing crapified products? Come on! Are they serious?

In a previous post, SEC Takes Victory Lap for Pathetic Performance of Whistleblower Program, I recapped the history of the SEC’s whistleblower program.

Allow me to reprise some key points.

First, measures to promote whistleblowing have long been a part of the US legal system. So there’s little excuse for underperformance, as it’s there’s been a long history in this regard:

Incentives for private parties to spill the beans are a hallowed component of the US legal system, dating back to the Civil War-era False Claims Act (FCA) and extended by Congress in 1986. This statute includes “qui tam” provisions permitting individuals to sue on behalf of the government– and to receive a bounty if they prevail. The phrase qui tam is an abbreviation for the Latin “qui tam pro domino rege quam pro se ipso in hac parte sequitur”, which means “[he] who sues in this matter for the king as well as for himself.”

And second, the current SEC program, authorized under Dodd-Frank, was badly designed from the start. This has serious consequences and certainly squelches many potentially valid claims:

Some would say that the SEC program was badly designed from the start in that it left it to the SEC alone to decide whether to file a legal claim based on the whistleblower’s report. I would say this was a feature not a bug but will not belabor the point. From the SEC’s website “The Commission is authorized by Congress to provide monetary awards to eligible individuals who come forward with high-quality original information that leads to a Commission enforcement action in which over $1,000,000 in sanctions is ordered.”

This means that the whistleblower cannot file a legal claim himself under this statute against the firm that has allegedly committed fraud or somehow violated securities laws. (Separately, the whistleblower might be able to file an action under other existing federal securities laws, but that discussion is beyond the scope of this piece.) Instead, the whistleblower’s only recourse under the Dodd-Frank statute is to report the violation to the SEC, and the agency prosecutes the case.

Why does this matter? As one of my cronies who practices in the qui tam area observes, he often floats arguments that various federal agencies consider to be unappealing on their face and will not pursue (perhaps for political reasons, e.g. the Air Force does not like suing Lockheed). But clever lawyering that ends up before the right judge can sometimes result in the success of some of these arguments, and eventually yield substantial recoveries– for both the government and the whistleblower– as well as have a deterrent effect.

The Journal article then discusses the compliance implications of that fact:

“This should be a crimson flag to employers that they should double down on efforts to improve their compliance programs and train managers to be aware and responsive to complaints or issues raised,” said Gregory C. Keating, chairman of the whistleblowers defense group at the law firm Choate Hall & Stewart LLP.

What the Journal then fails to spot is that raising an issue internally, without simultaneously reporting the issue to the SEC, potentially exposes the employee to retaliation (depending on in which court the the whistleblower’s claim is brought).

As the SEC Whistleblower Report (2017) explains:

The federal courts of appeals are divided over whether the Dodd-Frank anti-retaliation protections apply to employees who report potential violations of the securities laws internally without also reporting directly to the Commission. Most recently, in Somers v. Digital Realty Trust, Inc., the United States Court of Appeals for the Ninth Circuit agreed with the United States Court of Appeals for the Second Circuit’s decision in Berman v. Neo@Ogilvy LLC by finding that Congress did not intend to limit protections to those who disclose information to the SEC . Rather, the anti-retaliation provision also protects those who were red or otherwise retaliated against after making internal disclosures of alleged unlawful activity under the Sarbanes-Oxley Act and other laws, rules, and regulations. The Ninth Circuit agreed with the Second Circuit that even if the statute were ambiguous, the SEC’s regulation resolved any ambiguity, and was entitled to deference The United States Court of Appeals for the Fifth Circuit in Asadi v. G.E. Energy (USA), L.L.C., however, found to the contrary (citations omitted).

On June 26, 2017, on the basis of the circuit split, the United States Supreme Court granted certiorari in Digital Realty Trust, Inc. v. Somers to address the scope of Dodd-Frank’s anti-retaliation protections. On October 17, 2017, the United States Solicitor General, acting on behalf of the Department of Justice and joined by the Commission, led an amicus curiae brief in the Supreme Court in support of the whistleblower-respondent. The United States’ amicus curiae brief in support of the whistleblower in Digital Realty continues the Commission’s advocacy efforts and urges the Supreme Court to recognize that Dodd-Frank’s statutory language, its legislative history, and the Commission’s rules require that individuals who internally report potential securities violations at a publicly-traded company are entitled to employment retaliation protection, regardless of whether they have separately reported that information to the Commission.

The Supreme Court’s decision in this pending case will have significant implications, for if it fails to rule that anti-retaliation provisions apply to whistleblowers who opt to pursue internal channels before involving the SEC depending, such an anti-whistleblower ruling would weaken an already weak and inadequate whistleblower program.

I’ll close by mentioning legislation passed earlier this year, and signed into law by Trump in October. As reported by the Washington Post in New law targets managers who retaliate against federal whistleblowers, analyzing the Dr. Chris Kirkpatrick Whistleblower Protection Act of 2017:

The legislation — approved unanimously by both chambers of Congress — is designed to stem management retribution by making supervisors face disciplinary measures for their actions.

The Post touts this bill as representing a major victory for federal whistleblowers, calling it “potentially a watershed in Uncle Sam’s approach to whistleblowers.” I’m sorry– given the paltry penalties it imposes, I don’t see it that way. Nor do any of the employee-side attorneys I’ve talked to.

And, after all, if this bill truly represented a major victory for federal whistleblowers, does anyone honestly think that the current Congress would have passed the legislation– and Trump signed it into law?