Reader vlade e-mailed about a Richard North blog entry on Parliamentary testimony on the impact of Brexit on the auto industry. North found the content of the reports, the incomprehension and lack of inquisitiveness by the MPs, and the lack of press interest, all to be deeply disturbing. Recall that North was and is a Leave backer who nevertheless has been chronicling the mess that Brexit will be while occasionally telling his readers it will be worth the ten years of pain that he anticipates.

North complains in his post that in addition to the MP leading the inquiry, Labour’s Rachel Reeves, being visibly clueless, matters were not helped by the auto experts underplaying the seriousness of the issues and bizarrely offering false hope, like the usual UK default “Surely there is a way out” which was further watered down into the handwave that the UK had to “find a way to bridge that gap.”

As we’ll explain, the bottom line is that the UK auto industry is going to take an even bigger and faster hit from Brexit than I anticipated, and it will occur as a result of the UK losing access to the single market, so the damage will be serious even if the UK manages to reach a Brexit agreement.

As vlade and I discussed via e-mail, some of the key points are very technical, and so I may fall afoul of buzzword compatibility and/or in the reading of some of the mechanisms. Nevertheless, just as one could conclude “CDOs are very risky and look like they are going to create even bigger losses for banks” in 2008 without knowing how they were structured, here the high level conclusion, the UK auto industry will take a big hit as a result of Brexit, seems to be well founded.

Automobiles and auto parts account for roughly 12% of UK exports. As you can see from the table below, from the written testimony of the Society of Motor Manufacturers and Traders, the EU is far and away the most important destination: 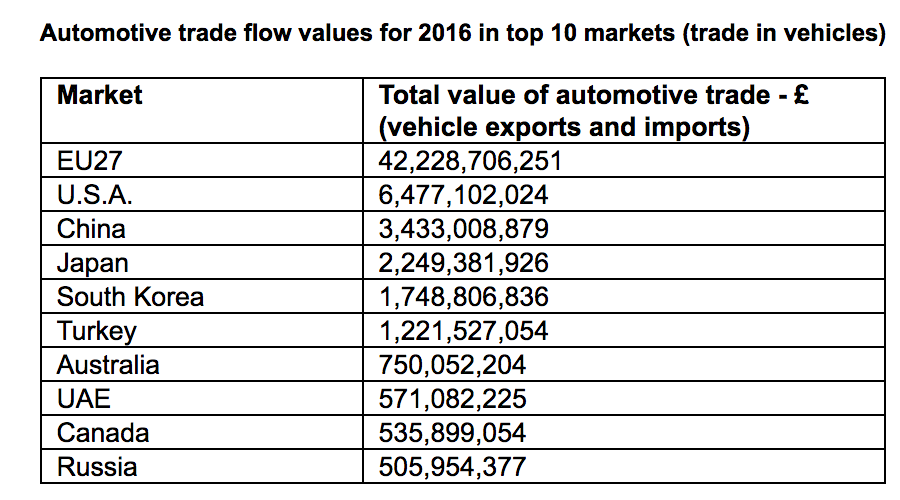 The Importance of Approvals in Global Supply Chains

We’ll start with North, who has some experience on this topic, having written on it in with respect to the UK-Korea trade agreement. From his post:

As [Patrick] Keating [Government Affairs Manager, Honda Motor Europe] explained, the “real risk” to the car industry will be triggered not in the event of a “no deal”, but “as the UK leaves the Single Market”. When this happens, the type approvals issued by the VCA, the UK Vehicle Certification Authority, will either no longer hold validity or not be able to be extended.

This technical jargon conceals a life-or death issue for the industry. For Honda, all the vehicles manufactured at its Swindon plant – with a huge proportion exported to Europe – are approved by the VCA which means that, post-Brexit, their products will no longer be cleared for sale in EU Member States.

This will also apply to all other vehicles approved in the UK, effectively bringing export sales to a complete halt, until such time as the vehicles can be submitted to an EU Member State approval authority, and gain new certification. And that won’t be easy or quick..

It is almost certain that the UK, having acquired “third country” status by virtue of having left the Single Market, will have to submit its products for type approval again, before they can be sold. There will be no recognition of third country approvals.

The Society of Motor Manufacturers and Traders discussed the approvals issue in its written testimony, sadly buried starting at Item 33 (emphasis ours):

Once all of the systems and component have been approved, the vehicle will be considered as a whole by a designated approval body, who gains its authorisation from the EU; in the UK, this is the VCA…A successful inspection accompanied by the submission of the relevant manufacturer’s information documents will result in the issue of a European Community Whole Vehicle Type Approval Certificate. This certification will be accepted throughout the EU without the need for further testing until the design of the vehicle changes.

The vast majority of manufacturers in the UK use the VCA to obtain approvals to the EC Directives and Regulation and have long, established working relationships with the VCA, which help increase the efficiency of the approval process. The certification process normally takes between 6 to 18 months for manufacturers to obtain a European Community Whole Vehicle Type Approval Certificate and manufacturers can begin initial their initial discussions with the approval authority between 3 and 10 years prior to the formal certification process…

The issue over the validity of existing approvals is vital because if this is not agreed, manufacturers would have to replicate their whole vehicle type approval with an approval authority based in another EU Member State. This would result in significant cost, negatively impact UK manufacturers future plans and undermine their technology implementation timetables, as gaining new approvals automatically make a vehicle a new type and therefore subject to the most recent legislation and implementation dates. It is also unclear whether or not other EU approval authorities would have the capacity to validate all the vehicles previously validated by the VCA. If this were indeed the case, this would result in UK built and approved vehicles being unable to be sold across the EU.

Let us be clear as to what happens. Once the UK leaves the EU, the old VCA certifications won’t be valid unless the EU kindly agrees to let them remain in force on some sort of interim basis. Given that no one in Parliament even comprehends the problem, that Brexit negotiators from David Davis on down are allergic to detail and overwhelmed, and that even the domestic lobbying group is bizarrely underplaying the seriousness and urgency of the problem, how likely is that to happen? So that in turn means UK auto and parts makers will not be able to export goods made in the UK to the EU until they obtained new approvals, which normally takes six to eighteen months.

And this means production stops. From North (emphasis ours):

The point Mike Hawes (Chief Executive, Society for Motor Manufacturers and Traders) then made, after Keating had delivered his unrecognised bombshell, was that manufacturers could not apply for type approval while actually manufacturing so they would have to cease production while they re-applied.

As bad as this scenario would be, consider more broadly the impact of shutdown or damage-prevention shifting of EU production and hence jobs out of the UK. It means reduced employment in communities where the auto facility is probably one of the biggest local employers. Given that automobile industry jobs are normally high-wage and relatively stable, the knock-on effects in the area would be significant.

And let’s consider other factors that make this situation worse.

The EU is in the midst of revamping its motor vehicles regulation. While there is draft legislation published, and the rules are expected to be final before Brexit, this does not help the UK’s situation, to put it mildly.

Approvals for other industries are important for the auto industry. From the Society of Motor Manufacturers and Traders:

To take the example of the transposition of the Registration, Evaluation, Authorisation and Restriction of Chemicals (REACH) Regulation into UK law, this will require UK government to decide how the UK will engage with, or domesticate, the work of the European Chemicals Agency (ECHA)[4], a hugely complex and technical regulatory regime. At present, it is presumed that this decision will be taken through the secondary legislation process of the EU (Withdrawal Bill), however, any amendment to the current functioning of chemicals legislation will have significant and fundamental impacts on the operations of automotive supply chains which have REACH embedded in their processes. Additionally, it is important to note that, post-withdrawal, UK companies exporting to the EU must still remain compliant with REACH regardless of the legislation in place in the UK.

North points out in passing that REACH does not recognize third country approvals.

Precedents suggest that the UK automakers will need to get approvals from EU bodies. Again from North, who views the EU-Korea trade agreement as a likely model:

Sure enough, when you read the small-print of that agreement (Annex 2-C), Korean motor manufacturers are still required to submit their products for type approval to an approval authority in an EU Member State, before they can be sold. Additionally, the Koreans have to maintain absolute conformity with EU/UN regulations, including the adoption of new regulations as they are come into force.

North rejected the idea that the UK and EU would agree to recognize each other’s approvals:

There is not the remotest possibility that the EU will accept mutual recognition of type approvals. The best one can hope for is a temporary agreement to tide us over any transitional period. Deal or no deal, in the longer term, UK type approvals will no longer be valid in EU Member States.

UK immigration restrictions will also damage its automobile industry. From the Society of Motor Manufacturers and Traders’ written testimony:

UK automotive manufacturing has a significant skills gap with a particularly acute demand for engineering skills, a 2015 Automotive Council report identified that the sector had up to 5,000 current vacancies which were causing significant impact on business operations[7]. This skills gap is projected to increase due to the ageing workforce and the lack of a sufficient talent pipeline into the industry.

EU skills and talent are utilised in all aspects of automotive business in the UK as companies seek the best available talent to fill a role – UK automotive employs non-UK EU workers in senior executive/leadership, finance, customer service, HR, engineers, technicians, IT and shop floor workers…

Many automotive companies have multiple plants throughout the EU and employees are often moved between plants to meet specific short-term engineering, manufacturing or management needs. Additionally, many companies choose to move employees around to aid their professional development, improving the quality and competiveness of the business…

The automotive industry has experience of employing or transferring non-EU nationals (through the Tier-2 route). This is complex, burdensome and costly, making EU staff access even more attractive. Industry would not want to see this approach replicated for any EU migration system.

The EU provides R&D funding for the auto industry, although some programs are open to non-EU members. Again from the Society of Motor Manufacturers and Traders:

R&D public funding plays an important role in de-risking early research, while the application requirements of the Horizon 2020 programme also plays a role in promoting collaboration across the EU, giving the UK automotive industry the ability to share and learn from the continental partners.

Automakers are diehard “just in time” manufacturers. So supply chain uncertainty is particularly unattractive to them. They won’t hold buffer stocks to deal with production vagaries if they have any other alternative.

The automobile industry is one of the UK’s most important export sectors. If the officialdom isn’t particularly willing to hear that Brexit will do it great damage unless it’s made a significant priority in the negotiations, and worse, industry incumbents lack the guts to make that clear and suggest realistic approaches, what is going to happen to other areas of commerce the individually are lower profile but together add up to meaningful employment and output?

The more you delve into details on Brexit, the worse things look for the UK.