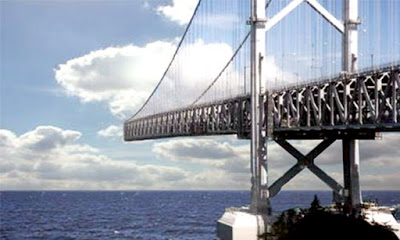 Your methane bridge to nowhere (source)

I’ve seen this report referenced several times, but none of those mentions is getting traction. So time to repeat. The idea that methane, so-called “clean natural gas” or “clean energy,” is a bridge fuel that can make our climate problem better — is a lie.

That’s just common sense. It makes even more sense when you consider that the Big Oil barons who own the oil companies also own many of the methane companies. Of the ten top drillers of fracked gasin the U.S., the largest by far is:

The biggest natural gas producer is also the country’s biggest oil company and one of the most profitable corporations in the world. Exxon has operations in every continent but Antarctica. Its oil and gas operations range across several states, from Pennsylvania to Colorado, and it also has wells in the Gulf of Mexico and off the California coast.

With the purchase of XTO, Exxon produces nearly 50 percent more gas than its closest competitor. Earlier this year, Exxon began running ads touting natural gas as a safe, clean source of domestic energy. About two-thirds of the company’s domestic reserves are now in natural gas, with the rest in oil.

Others on the top ten list include BP, ConocoPhillips and Chevron. So call the promotion of “clean natural gas” a profit protection plan for Big Oil as well.

Do we want Big Oil companies to be profitable? Only if they abandon carbon fuel extraction and go into an entirely different, entirely anodyne business, as makers of party balloons perhaps. Otherwise, they need to die and disappear as companies, the sooner the better.

(I suspect that most people don’t realize this — that if we don’t kill off the fossil fuel companies, they will kill us off. That’s literally true. Exxon and its like really do have to fail and disappear, or be taken down, before anything resembling our smart-phone civilization can survive.)

The Bridge to Nowhere

The common sense wisdom that says “switching to methane fuel won’t help” is backed by data. The latest report is nicely summarized by Joe Romm at ThinkProgress (h/t the smart climate site Faster Than Expected):

The evidence is overwhelming that natural gas has no net climate benefit in any timescale that matters to humanity.

In fact, a shocking new study concludes that just the methane emissions escaping from New Mexico’s gas and oil industry are “equivalent to the climate impact of approximately 12 coal-fired power plants.” If the goal is to avoid catastrophic levels of warming, a recent report [pdf] by U.K. climate researchers finds “categorically no role” to play for new natural gas production.

Of course, the carbon lords get their say, even at the U.N. Note that the source is the IEA, which represents the prospects for the industry, not for the humans affected:

Sadly, the International Energy Agency (IEA) has just published a “Commentary” on “the environmental case for natural gas,” that ignores or downplays key reasons that greater use of natural gas is bad for the climate.

As the note in the Commentary says, “With concerns about air quality and climate change looming large, natural gas offers many potential benefits if it displaces more polluting fuels.” Directly contradicted by the data, but when there’s money on the table, seems even the U.N. helps its owners bend to pick it up.

The Problem With Methane

Part of the problem is that methane is subject to leaks all along its supply and production chain, and methane, while short-lived in the atmosphere, is incredibly potent as a greenhouse gas.

Atmospheric methane decays to carbon dioxide and water vapor in about 12 years, but note, carbon dioxide is itself a greenhouse gas, and also, prior to decay — that is, when first emitted — methane is more than a hundred times more potent that CO2. Over a 20-year span, the IPCC considers methane to be 84 times power potent than CO2. If we keep refreshing the atmospheric supply of methane, as we’re doing, we renew its global warming power each year, year after year.

In 15 years or less, global temperature will already have surpassed the dangerously generous “two degrees warming” the world is trying to avoid:

“The 2017 emissions data make it crystal clear that urgent and very serious emissions reductions are needed to stop global warming below 2° C, as was unanimously agreed in Paris,” Stefan Rahmstorf, a climate scientist at the Potsdam Institute for Climate Impact Research in Germany, said in an email. …

Rahmstorf said there are currently about 600 billion remaining tons of carbon dioxide that can be emitted if the world is to have a good chance of keeping warming considerably below 2 degrees Celsius, and with some 40 billion tons of emissions each year, that leaves just 15 years.

Those fifteen years will shorten every year we keep increasing emissions, as we already know we will in 2017. In 15 years, most of us will still be alive — and the world will be completely different in ways few can imagine.

The second problem with methane is that it doesn’t just replace some coal, it replaces renewable energy sources as well. Call it the magic of the market. Romm:

Indeed, researchers confirmed in 2014 that  —  even if methane leakage were zero percent  — “increased natural gas use for electricity will not substantially reduce US GHG [greenhouse gas] emissions, and by delaying deployment of renewable energy technologies, may actually exacerbate the climate change problem in the long term.” Exactly. In fact, a 2016 study found that natural gas and renewables are competing directly with each other to replace coal plants in this country.

Joe Romm’s data comes from a study published in 2014 in the journal Science, which has just been reinforced by a new study (pdf) at the Tyndall Centre for Climate Change Research. Among its conclusions are these (emphasis added):

By 2035 the substantial use of fossil fuels, including natural gas, within the EU’s energy system will be incompatible with the temperature commitments enshrined in the Paris Agreement.

1) The Paris commitment will be exceeded in under 18 yearsof current greenhouse gas emissions [actually, in 15 years or less according to the latest 2017 emissions data]

3) It is highly unlikely that the Paris 1.5°C commitment is a viable mitigation objective

5) To meet its Paris 2°C commitment the EU needs over 12% p.a. [per annum] mitigation, starting immediately

6) To deliver on the Paris commitments, policy makers need a balanced portfolio of CO2 mitigation scenarios with ‘negative emissions technologies’ only included in the exotic minority[i.e., no “Bill Gates and technology will save us” scenario]

9) Carbon dioxide from combustion is the dominant contributor to the long-term climate change impact of natural gas. Methane has a much greater warming effect than carbon dioxide per unit of emissions released but its atmospheric lifetime is short, only about a decade. However, persistently high emissions [meaning leaks] of methane would replenish this loss and maintain this initial warming effect

10) For stabilising at 2°C, reductions in methane emissions must be accompanied by CO2 reductions

The study concludes that “there is categorically no role for bringing additional fossil fuel reserves, including gas, into production.”

What to Note About This Report

Readers of these pages know by now what the rest of the country is just starting to discover — that climate change is already affecting American lives in large and tragic ways, and that the madness of burning fossil fuels to satisfy the greed and, yes, pathology of a small handful of billionaires (plus those they control), that madness must end before it ends us.

What seems new here is the absolute finality of statements in recent latest climate reports. These are black-and-white conclusions. Again — “there is categorically no role for bringing additional fossil fuel reserves, including gas, into production.” No wiggle room in a statement like that; no sugar at all to coat it with.

Once categorical statement like these make it into the insurance company estimates and reports (to name just one industry affected) — that is, once global warming start to look affect billionaire money — you’ll see a sudden increase in public awareness, to add to the gradual shifts in awareness we’re seeing right now.

Will wake-up call change the course of U.S. carbon emissions? Not while money buys politics and policy in the U.S. But it will introduce Sanders-like political chaos into the system. At that point the political battle will be visible, out in the open, with participants from all quarters joining in. Even the corporate news will report on it.

What will be the effect of a wide and visible public battle over fossil fuel use, as the billionaires dig in?