Patient readers, I have a commitment today that I need to make time for, so I am going to break form and present a Water Cooler with just a few topics. You may talk amongst yourselves, of course, but there are so many interesting stories right now that I want to present just a few for your consideration. I accumulated a lot of links over the weekend, so tomorrow I will have a pantry clearout. –lambert

Cory Booker is giving a soaring speech to a crowd of canvassers in Birmingham. The ears of every reporter seemed to perk up when he mentioned &quot;Iowa schools&quot; in a riff about the country more broadly.

“Days before election, Roy Moore disappears from campaign trail” [Montgomery Advertiser]. Lost in the mall? “Moore has made fewer than 10 public appearances in the past month…. Although Friday’s winter weather scrambled both campaigns’ plans, Moore’s absence from the trail is a notable contrast to Democratic nominee Doug Jones, whose campaign said Saturday he had done 217 public events over two months, and who has done almost daily appearances in the campaign’s last weeks.”

“Doug Jones is a Terrible Candidate” [Medium]. “Come election day, Alabamians will have the sacred honor of participating in the democratic process by voting for either a child rapist or a weak-kneed white blob in a suit to go work on Capitol Hill for some unknown corporate donor. Personally, I can’t say that I will be taking part.” And the dogpiling begins in 3… 2… 1…

“Alabama Doesn’t Owe the Democrats a Damn Thing” [SongDog]. “And accordingly, here come the coastal Democrats to put us all in line. A young DSA activist [link above] posted her critique of Doug Jones, for her Twitter audience of perhaps 2,000 across the country—of whom maybe 100 would’ve read her analysis. She rightly pointed out that, in one of the poorest and sickest states in the Union, the best the Democrats could muster is a candidate who supports neither a living wage, nor universal healthcare. In a state ravaged for decades by the depredations of neoliberalism, and centuries by slavers and their descendants, the best Doug Jones can do is appeal to bipartisanship in some half-baked Civil War ad. This young woman pointed out her outrage at this latest failure—Howard Dean blamed her for Donald Trump. She declared she would not participate in this half-ass appeal to the status quo—a status quo that’s currently being investigated by the UN as an example of extreme inequality and poverty—and liberal journalists called her privileged. She’s a trans woman in Alabama.”

Meet our demands and it won’t happen again:

“Report from Alabama: Can black voters sink Roy Moore?” [Will Bunch, Philadelphia Inquirer]. “When I asked Daniels about the seeming lack of energy in the black community, he insisted that Alabama’s African American voters aren’t an enthusiastic lot until Election Day arrives. “I don’t know if you saw energy even with Obama until they got out to the polls,” he said. In this final weekend of the campaign, the Jones campaign did bring in prominent outsiders, like New Jersey Sen. Cory Booker — seemingly a belated acknowledgement that more work needed to be done in predominantly black neighborhoods.”

“Black voters could defeat Roy Moore, if they show up on Tuesday” [McClatchy]. “For Alabama Democrat Doug Jones to win Tuesday’s special election for U.S. Senate, he’ll need near-historic turnout from the southern state’s large black community and progressive voters. If history holds, he won’t get it…. But to engineer the win, the party needs to mobilize a group of voters known in progressive circles as the “Rising American Electorate” — minorities, unmarried women and millennials, ages 18 to 34 — who have failed repeatedly to show up on Election Day when Barack Obama is not atop the ticket.” ZOMG!!!! The Democrats have rebranded the “Coalition of the Ascendant,” and fed it to a reporter, who swallowed it!

“Lewis is one of the few Democrats to stump for Jones in the months ahead of the election, but his presence on the trail should indicate that the black vote is still a struggle, and not one that begins or ends with a December special election. Alabama is but a case study in the renewed difficulties of getting black votes after Shelby County, and a survey of factors that go beyond “energizing” or “mobilizing” disaffected black people. Perhaps Jones will do enough canvassing in the black belt to eke out a victory this year, but the structural barriers to voting will likely remain, or worsen” [The Atlantic]. Structural barriers about which the national Democrats have done precisely nothing, probably because there’s no money in it for the consultants (meaning the donor class doesn’t want it).

“Doug Jones Flyer Draws Criticism, Backlash From Black Voters” (video) [WKRG]. “‘Prior to this, I was going to vote for Doug Jones. I felt like he was a better candidate. But after receiving this, I have decided not to vote at all,’ said Johnson. ‘For his campaign to put this flyer out it is a complete slap in the face.'”

On the Jones flyer:

“Fox News Poll: Enthused Democrats give Jones lead over Moore in Alabama” [FOX]. “[A]ccording to a Fox News Poll of Alabama voters conducted Thursday through Sunday using traditional polling techniques, including a list-based probability sample with both landlines and cellphones. Jones receives 50 percent to Moore’s 40 percent, with 1-in-10 undecided (8 percent) or supporting another candidate (2 percent).” Big if true, and not a vote suppression scam.

More on polling. It all depends on how you model the electorate. Thread:

Am hoping Alabama’s election — whatever the results — doesnt follow the standard “parachute in for 5 minutes to momentarily cover a high-profile race &amp; then go back to forgetting Flyover Country exists” formula of media coverage. These non-NY/DC locales deserve ongoing coverage.

For the national Democrats, the race is at best about many other things than Alabama voters, as Booker’s “Iowa” Freudian slip shows.

Here&#39;s the full video of our @NomikiKonst ? going apoplectic over DNC budget transparency. THIS is how you get things done. Thank you Nomiki! ? pic.twitter.com/u7p84uAi1Z

I’ve been wondering what sort of legal entity the Democrat Party is. It’s not a profit-making corporation. It’s not a 501(c)(3) or whatever. It’s not a membership organization like the DSA or British Labour. And if you believe the DNC’s lawyer in the Beck case, the party — whatever it is — can choose whatever candidates it wants in a smoke-filled room. So apparently it’s not an association of voters, or responsible to them in any way. The expert I asked said this question is “fantastically complicated.” However, from Konst, we know that whatever else it may be, the Democrat Party is a trough into which the donor class dumped $700 million dollars or so, and which five or six consultants greedily sucked dry.* No wonder the Sanders $27-dollar-contribution model is so threatening that everybody is utterly silent about how well it worked and the possibilities on policy it opens up. NOTE * To be fair to the consultants, at least they weren’t noisy about it; we didn’t know the deal until Konst told us.

Sanders on the Unity Commission:

The Democratic Party will not become a vibrant and successful 50 state party until it opens its doors widely to the working people and young people of our country. I am extremely pleased that the Unity Reform Commission has begun that process.

Emphasis on the word “begun.”

This is certainly moving on from brakelights, though the principle is the same:

We&#39;ve organized a training session on administering Naloxone, a medicine that can halt the effects of an opioid overdose. Everyone who comes gets a kit and is prepared to save lives in an ongoing crisis the politicians have no solution for.

Since this is health-related, I’m assuming that everything is on the up-and-up, including training. But… a concrete material benefit indeed!

The Bezzle: But have I filed this Bitcoin tweet correctly?

Bitcoin: my answer to the repeated questions.
No, there is NO way to properly short the bitcoin &quot;bubble&quot;. Any strategy that doesn&#39;t entail options is nonergodic (subjected to blowup). Just as one couldn&#39;t rule out 5K, then 10K, one can&#39;t rule out 100K.
Gabish?

I hose my area down. Doesn’t everybody?

* * *
Readers, feel free to contact me at lambert [UNDERSCORE] strether [DOT] corrente [AT] yahoo [DOT] com, with (a) links, and even better (b) sources I should curate regularly, (c) how to send me a check if you are allergic to PayPal, and (d) to find out how to send me images of plants. Vegetables are fine! Fungi are deemed to be honorary plants! If you want your handle to appear as a credit, please place it at the start of your mail in parentheses: (thus). Otherwise, I will anonymize by using your initials. See the previous Water Cooler (with plant) here. Today’s plant (Carla): 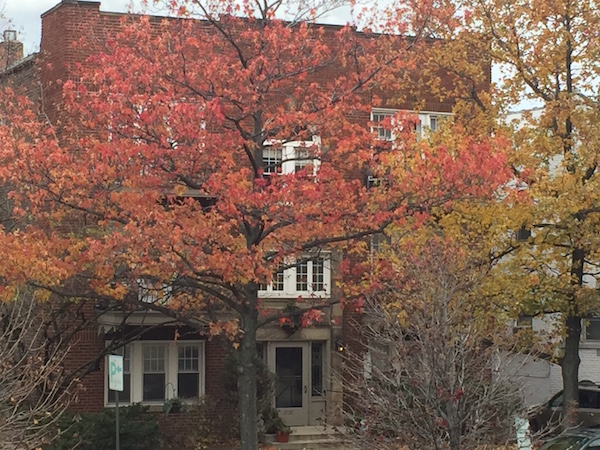 Readers, I’m running a bit short on plants. Buttoned-up gardens? Fall foliage? Forest fires?! First snow? Those photos from the summer you never had time to look at? Thanks!