Yves here. One of the many frustrations of reading the sloganeering in the UK on Brexit that is presented as analysis is the oft-repeated claim, “The EU exports a lot to us, they have more to lose than we do.”

This is slipshod for a whole host of reasons. For instance, implementing hard borders with the EU will lead multinationals to shift a lot of their operations in the UK to the Continent. Moreover, even if the EU were to take a bigger GDP hit (debatable at best), it would be spread across a much larger economy and population, making the relative decline on an aggregate and per capita basis smaller.

This post provides a more granular look at which regions are likely to suffer most as a result of Brexit.

Analyses of the impact of various types of Brexit at the national level hide a lot of regional economic heterogeneity. This column deploys a new interregional dataset to quantify the shares of regional labour income that are exposed to the implications of Brexit for trade, taking into account the indirect effects of supply chain relations. The results show that much more is at stake for UK regions than for the rest of the EU, with the exception of Ireland.

Over the past two years, several studies have addressed the question of the extent to which the UK and other EU countries will be affected by various types of Brexit (e.g. Ebell et al. 2016, Dhingra et al. 2016, Brakman et al. 2017). These studies adopted a range of methodologies, some of which rely on global input-output tables. The main advantage of global input-output tables is that they provide a natural link between trade and value added. In a world of global value chains, the value added by an economy cannot be deduced from gross trade balances. This is important, because if Brexit leads to higher trade barriers, the reductions in value added are not necessarily proportional to reductions in gross exports.

Analyses at the national level hide a lot of regional economic heterogeneity. In this column, we present evidence of this using the EUREGIO database. EUREGIO consists of an annual time series of global input-output tables with regional detail at NUTS2 level for EU countries. The tables have been constructed by merging data from regional accounts, Cambridge Econometrics, and transportation surveys (Thissen et al. 2013) with (survey-based) regional supply and use tables and global supply and use tables from WIOD (Timmer et al. 2015). The regional economies have been disaggregated into 14 industries.1

We focus on the Brexit exposure of regional labor income, rather than of regional GDP. The main reason for this is that profits are not strongly tied to the region where economic activity takes place, since they are often ‘repatriated’ to company headquarters. In contrast, commuting between regions defined at NUTS2 level is limited, so labour income can be considered as more ‘sticky’.

Currently, various varieties of Brexit scenarios are still on the table, in a broad range from a ‘cliff-edge’ Brexit to a Brexit in which the UK (or parts of it – i.e. Northern Ireland) would remain in the customs union and/or the Single Market. We do not estimate the regional labour income effects due to any of these scenarios. Instead, we estimate the shares of labour income that are ‘exposed to Brexit’. We arrive at these estimates by comparing actual labour income to labour income in a situation in which bilateral trade flows between all EU regions on the one hand, and all UK regions on the other, would be set to zero. This ‘hypothetical extraction’ of trade flows is done for both UK-EU trade in intermediate inputs and trade in final products. For UK regions, this amounts to computing the ‘regional labour income in exports to the EU’ following Los et al. (2016), which provides the required bilateral extension of Koopman et al. (2014). The approach is based on Leontief’s input-output model, which has a demand-driven nature. We derive our indicator of labour income exposed to Brexit as the difference between actual labour income and the hypothetical labour income. This compares the actual situation to the situation that would prevail if Brexit would have its maximum trade effects (zero trade crossing UK-EU borders) and substitution among products and among regions/countries-of-origin would not take place. Given that firms and consumers will of course react by substituting away from more expensive products, our indicator should not be seen as predictions of the actual effects of Brexit, but rather as the share of regional labour that is ‘at risk’ due to Brexit-related trade barriers.

A major advantage of using this approach is that it takes the consequences of outsourcing and offshoring of stages of production (Timmer et al., 2013, Baldwin, 2016) explicitly into account. Labour income in the business services industry in Noord Holland (the Dutch region of Amsterdam) might be affected if it delivers part of its services to a manufacturer in South Holland (the Rotterdam region) who exports to the UK. An analysis based on only bilateral trade data would therefore be biased.

The analysis is based on the most recent EUREGIO table, for 2010. Figure 1 presents the results for each of the NUTS2 regions in the UK. The lowest level of labour income exposure to Brexit is just below 8%, in the Highlands and Islands (Northern Scotland). Other regions with low exposure levels include Northeastern Scotland, Merseyside and both Inner and Outer London (slightly above 9%). This latter result might be seen as remarkable, in view of the popular claim by the Leave campaign in the run-up to the referendum that EU membership mainly benefitted the ‘metropolitan elite’ in the City. There are two reasons why London appears less exposed to Brexit than the average British region. First and foremost, the London economy is very large, as a consequence of which it produces a large part of its output for local use. Second, the important financial services industry caters to many British clients elsewhere in the UK and a substantial part of its exports have non-EU countries as their destination. 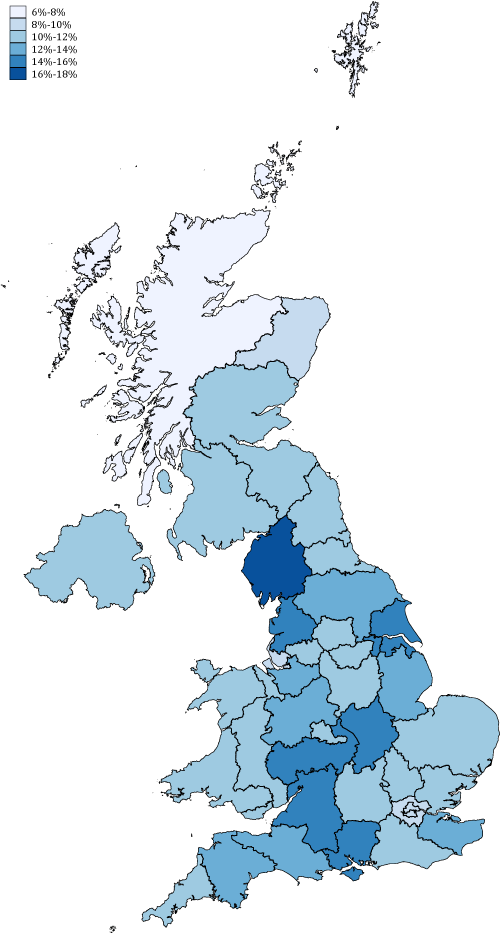 The highest labour income exposure level amounts to almost 17% (in Cumbria). Other regions with high levels of exposure include Lancashire, Leicestershire and East Riding/North Lincolnshire, which are located in the old British industrial heartland. In these regions, the exposure levels are 14-15%.

Differences among regions are the outcome of the interplay of two broad factors. First, some regions have higher export intensities to the other side of the Brexit divide (direct and/or indirect, via participation in supply chains spanning multiple regions) in virtually all sectors. Second, some regions are highly exposed to Brexit because they have specialised in producing tradable products, such as manufactures. Kent, in the extreme Southeast of the UK, is ranked 9th among the UK regions with regard to its overall exposure. Its manufacturing industry, however, is extremely vulnerable to Brexit due to Kent’s port of Dover – we estimate that almost 44% of its labour income in manufacturing is at risk. In Cumbria, a smaller proportion of manufacturing labour income is exposed (38%), but as much as 30% of its labour income is generated in this sector (as opposed to 17% in Kent). 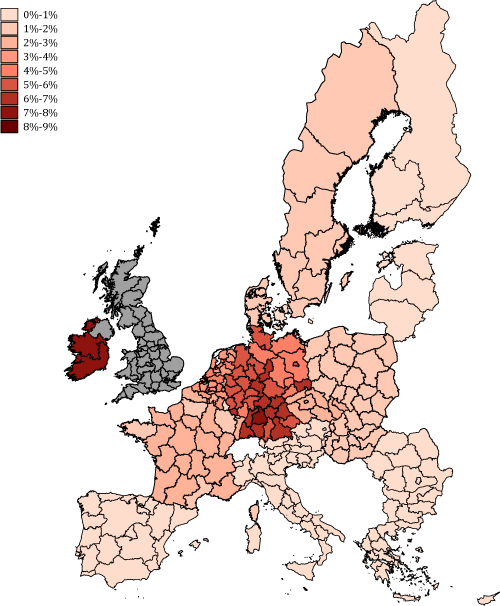 We focus on the extent to which regional labour income is exposed to trade barriers due to Brexit, taking configurations of supply chains into account. The estimated effects may be seen as an upper bound of the actual effects, yet the fact that we do not consider the income that might be lost due to relocation decisions, for example by multinationals, may on the other hand render our estimates more conservative. Bearing this in mind, two results stand out.

These regions are already poorer and have higher unemployment levels than the UK average (McCann 2016), which means that economic inequality among UK regions is likely to increase.

Hence, the stakes in the Brexit negotiations are much higher for the UK than for the EU27, despite the fact that the EU27 is a net exporter to the UK. The nature of the recent deal that concluded the first stage of UK-EU negotiations seems to reflect this finding.