Yves here. There has been much gnashing of teeth in the US about lackluster productivity growth, with the citied culprits ranging from lack of fundamental breakthroughs to cheap labor costs discouraging investment. Almost entirely absent from consideration is poor management demotivating worker. This article helps fill that gap.

Any organisation that needs to restructure, cut wages, or make layoffs needs to know how the employees who are not affected will respond. This column presents a field experiment which revealed that the perception that employers are unfair – in this case, as a result of layoffs – reduces the performance of employees who have not been not directly affected. As part of the experiment, experienced HR managers were able to successfully anticipate the consequences of unfair employer behaviour on unaffected workers.

Management matters for the success and profitability of companies. We know that simple management practices – including the regular maintenance of machines, optimisation of inventory, or recording types of quality problems – can improve the productivity of companies substantially (Bloom et al. 2013). Many of these management practices relate to the structure of an organisation, in particular its workflow and how it is controlled. But the relationship between managers and workers is also important. This relationship is characterised by both the wage paid to a worker as an incentive to work hard, but also by the worker’s perception that he or she is being treated fairly (Akerlof 1982).

If workers believe that their employer is acting unfairly towards them, this can greatly reduce their performance at work. For example, Mas (2008) demonstrated that the conflict between Caterpillar and its workforce in the 1990s led to lower production quality. It is not clear, though, whether workers react to employer behaviour that they think is unfair only if they are directly affected (for example, through wage cuts or reorganisation), or also if they are not directly affected (their colleagues suffer, but they do not). This distinction is important for any organisation that reorganises or lays off some of its workers.

In our new study, we set up a field experiment to measure how unaffected workers react to unfair employer behaviour (Heinz et al. 2017). We rented a call centre and hired 195 employees to conduct a telephone survey in two shifts. Overall, our organisation was very employee-friendly – we paid a generous hourly wage, offered flexible work times, a pleasant work atmosphere, and full discretion to workers how to perform their job. We measured individual performance precisely by the number of calls each worker made during a shift.

We used three treatments to identify the effect of unfair employer behaviour on the performance of unaffected workers:

To keep the remaining workers’ prospects constant (in the only remaining shift), we made explicit that there would be no future employment possibilities in our organisation. We also paid the wage upon arrival for each shift. This meant that workers in the ‘layoff’ treatment knew at the beginning of the second shift that the layoffs of their co-workers could not have any consequences for them.

The Effect of Layoffs on Survivors

We found that the layoff announcement decreased the remaining workers’ performance by 12% (Figure 1). In the ‘layoff’ treatment, workers took a longer break at the beginning of the second shift, and they left their workplace earlier than in the other treatments. The layoff announcement also lowered the quality of workers’ output.

In contrast, there was no significant difference in performance between our ‘no-layoff’ and ‘quasi-layoff’ treatments. The reduction in staff size per se had no effect on performance. Further robustness checks revealed that our treatment differences were not driven by a change in beliefs about the importance of the job, or changes in perceptions of the management’s competence. Since our employees worked in single offices, and few of them had social ties to employees from other treatments, we can largely rule out peer effects.

Figure 1 Difference in performance (number of calls made) between the first and second shift in the ‘no layoff’, ‘quasi-layoff’ and ‘layoff’ treatment 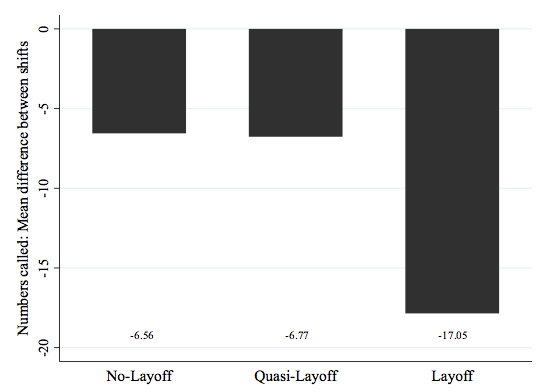 After the field experiment, we conducted surveys with our workers. Overall, workers in all treatments were quite satisfied with their salary, the management’s behaviour towards them, and the atmosphere in the call centre. The remaining workers in the ‘layoff’ treatment, however, were significantly less satisfied with management behaviour towards their colleagues than the workers in the other treatments. We also asked workers from the ‘layoff’ treatment which parts of the layoff announcement they considered anti-social. Their answers indicate that they saw the layoffs per se, and the random selection of workers, as particularly unfair.

To back up our interpretation of the data, we conducted a prediction experiment with 43 professional human resource managers from medium-sized and large companies in Germany (they had, on average, eight years of professional experience). We explained our call centre setting and our treatment variation to them, and then asked them to predict the change in workplace performance between the first and second shifts.

The HR managers’ predictions were remarkably accurate, in the aggregate. They predicted that performance in the ‘layoff’ treatment would drop significantly between the first and second shift, and that would drop only slightly in the other treatments. A large majority of the HR managers mentioned fairness concerns as the main reason for the performance reduction.

Our results imply that unfair behaviour towards workers can be costly for the employer, even if the only workers who are directly affected have quit the firm. This is important for any organisation that has to accommodate economic shocks by reducing labour costs.

To reduce or mitigate the costs of supposedly unfair acts, organisations could apply a number of HR practices. They could use HR practices that avoid layoffs (for example using natural fluctuation in the workforce). They could provide severance pay or outplacement services. They might shift the blame to interim managers or business consultants. They could also separate profitable and unprofitable business units, and downsize only the unprofitable units. These practices may help employers to maintain a productive relationship with their workforce.