Yves here. It should not come as a surprise to find that Carillion, a bad financial actor, also abused safety rules, and its legal structure insulated it from the consequences.

However, this post triggered another line of thought. First, the headline is misguided, because as with the TBTF banks in the crisis, holding companies accountable is pointless. They pay “cost of doing business” penalties and carry on with the same bad conduct, perhaps more carefully if they got big enough fines or bad enough headlines. Individuals need to be punished, most of all the executives responsible, with hefty fines, clawbacks, loss of deferred pay, and when appropriate (which is vastly more often than it happens) jail time.

But there is a second concern with the idea of holding Carillion, or more accurately, its executives, managers, and key enablers accountable. With the liquidation of the firm, what happens to the enormous volume of records, particularly those kept on computers? Typically in a liquidation, all the equipment is auctioned off. Is there any legal or regulatory process underway to make sure this data won’t be lost? Otherwise, the odds that key perps will get off easy rises considerably.

By Dave Smith, a blacklisted construction worker, secretary of the Blacklist Support Group, trade union tutor and co-author with Phil Chamberlain of Blacklisted: the secret war between big business and union activists published by New Internationalist. Originally published at openDemocracy

When you invite blacklisting human rights abusers to run the NHS and school meals, don’t be surprised when vampire capitalism attempts to suck the taxpayer dry, writes Dave Smith. 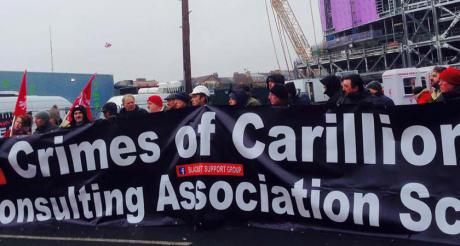 On Monday, the Cabinet Office went on Twitter to ask if anyone had been affected by Carillion. I replied:

“Yes, I was #blacklisted by #Carillion for raising safety concerns on their building sites. Can the government help me by setting up a public inquiry to bring those responsible to justice?”

I got 800 retweets in the first 24 hours, which as I’m not a celebrity or a newspaper columnist felt like going viral. But what it demonstrates is how the Carillion saga has outraged public opinion. And quite rightly.

I am just one of several thousand construction workers blacklisted by major construction companies including Carillion. Their secret database meant workers who complained about asbestos or unsafe electrical installation were denied work on major construction projects. This resulted in unemployment, mortgage repayment difficulties and family tensions. In some cases, blacklisted workers committed suicide.

Back in 2009, I took an Employment Tribunal against Carillion. On the first day in court their lawyer handed the judge a document in which the company admitted blacklisting me because I was a union member who had raised concerns about safety on one of their building sites. Carillion even provided the name of the senior manager based at their Wolverhampton HQ who supplied the information to the unlawful blacklist, this included a copy of my official safety representative’s credentials. Despite this admission, I still lost the case.

The reason for the decision was like so many others in the building industry, I was not employed directly by Carillion but via an employment agency and as such was not protected by UK employment law. The written judgement in my case states that:

“We have reached our conclusions with considerable reluctance. It seems to us that he has suffered a genuine injustice and we greatly regret that the law provides him with no remedy”.

We appealed and ended up in the European Court of Human Rights (we still lost). To add insult to injury, Carillion even came after me for £3,500 worth of legal costs.

In 2016 at the High Court, Carillon eventually admitted that they had blacklisted workers who complained about safety on their building sites and paid out millions in an out of court settlement. I was one of those who received a payment. But compensation is not the same as justice. Technicalities in the legal system meant that Carillion and the rest of the blacklisting companies were able to buy their way out of a trial. Not one of the company directors who orchestrated the blacklisting conspiracy has had to account for their actions. This is why blacklisted workers are so angry and are calling for a public inquiry into the national scandal.

Why do multinational companies like Carillion act like this? The simple answer is because they can. For decades, politicians from all the mainstream political parties have become virtual cheerleaders for private enterprise. ‘Unshackle business from burdensome red tape’ became the mantra. It might be good for corporate profits but it’s the increasing number of workers now forced to work on zero hour contracts or via employment agencies without any legal rights who are paying the price.

But the ‘private is best’ ideology has also seen Carillion and the other blacklisting companies being lavished with lucrative public sector contracts. Rampant privatisation resulted in the seedy practices of the construction industry infesting the public sector. At Swindon Hospital, Carillion managers were embroiled in a scandal involving allegations of racist bullying and bribery. At Pentonville prison the company were reported for being 6 months behind in repairs.

Carillion is just a symptom of a bigger problem. Its not about one poorly managed company. The whole neoliberal privatisation agenda is rotten to the core. When you invite blacklisting human rights abusers to run the NHS and school meals, don’t be surprised when vampire capitalism attempts to suck the taxpayer dry.

Why when education, health and social care are facing a funding crisis are we giving billions of pounds of taxpayers’ money to private companies and their investors? Whenever privatisation fails, the public sector is called upon to bail out big business, whether its Virgin Trains on the East Coast mainline, the G4S security debacle at the Olympics or Carillion. Yet despite the record of failure, the same private companies get invited back to retender for public contracts time and again. And bosses’ bonuses get ever more eye watering.

Of course, workers on projects run by Carillon deserve to be paid and are entitled to their pensions but not another penny of public money should be given to the bosses of the disgraced company. In a civilised society these people would be facing criminal charges. If the government has another magic money tree hidden away somewhere, it should bail out the NHS not Carillon or their bankers.

The time has come to take back control of our public services from the profit driven leeches who have taken over. The ‘greed is good’ philosophy has had its day. It’s time to think about what is best for society rather than the fat cats. The government should nationalise Carillon now at the current market value of their shares (i.e.: nothing) and run the projects for the good of our people rather than for private profit.

PFI and the myriad of other privatisation mechanisms need to come to an end. We could make a start by following the recommendation of the select committee investigation into blacklisting that called for all of the construction companies involved in the blacklisting conspiracy to be banned from any publicly funded contracts. We don’t have to wait for a General Election; local authorities, the Scottish government and the Welsh Assembly could implement such a policy tomorrow. Those who suffered at the hands of Carillion don’t need sympathy and kind words from politicians – we need action.

I have been campaigning on the issue of blacklisting for nearly a decade and my Carillion tweet has got the biggest response ever. Perhaps it’s an indication that the tide of public opinion is turning.