Peeved by price gouging and shortages, hospitals will now make their own drugs ars technica (resilc). A step in the right direction, maybe….drug company prices are so bad that it’s hard to think this isn’t profit driven.

Google CEO Sundar Pichai says AI is more profound than electricity or fire The Verge (David L). “‘He would say that, now wouldn’t he?'”

How to tame the tech titans Economist

US says China WTO membership was a mistake Financial Times

Britain could be back in the EU within a generation, hints Theresa May’s de facto deputy David Lidington Telegraph

No Brexit deal on financial services if UK diverges from EU, says Merkel ally Politico. Deadly. As we’ve been saying….

In addition to the £2.6bn Section 75 pension deficit, Carillion’s liabilities when it went bust included £1.3bn owed to its banking syndicate; £350m arising from early payment facilities with suppliers; cross-guarantees of £630m relating to bonding facilities; £170m of convertible bonds guaranteed by the company; and an unknown debt to Her Majesty’s Revenue and Customs, £16m of which was due by the end of the month.

This is a big deal. The amount of pension shortfall, reported a few days ago and presumably based on published financials, was just under £600 million. So this means accounting fraud, big time. Plus the clowns were paying dividends and hefty exec bounuses until July 2017.

Trump’s State Department spent over $1m in Iran to exploit unrest Medium. JTM: “Looks like more than a piddling $1 million.”

Finding Your Voice Intercept (Bill B)

Can Software Predict Crime? Maybe So, but No Better Than a Human New York Times (David L)

Scores of Republicans viewed the controversial memo in secure settings at the Capitol and concluded it contains hard evidence that the special counsel investigation into whether Trump’s campaign officials had improper contacts with Russia were sparked by the politically motivated actions of senior FBI and Department of Justice (DOJ) officials.

The Other Government Shutdown: Mulvaney’s Weeklong Assault on the Consumer Bureau Allied Progress

What happens if the government shuts down The Hill

Troops and families: Here are some ways a shutdown could affect you Army Times

Loneliness is contributing to our increasingly tribal politics Financial Times

Clinton And Bernie Allies Are Still At Odds Over Caucus Vs. Primary Rules For 2020 BuzzFeed (UserFriendly)

Before ‘Roe v. Wade,’ The Women of ‘Jane’ Provided Abortions For The Women Of Chicago NPR (Kevin W). The US is a serious outlier among advanced economies by not having the right to abortion be a matter of law (as in provided for in legislation)…

Babe Turns a Movement Into a Racket Atlantic (resilc). Important and well done.

Senate Democrats Join Hands With Republicans to Sell You Out to Banks SplinterNews (resilc). Key quote:

According to the Times, the bill’s supporters argue it would “offer much-needed relief to small banks and credit unions in parts of America that have been struggling under regulations that had primarily been aimed at the biggest banks.” That’s right: Every bank smaller than the 10th biggest bank in America is now a struggling small bank, just trying to make ends meet.

Human Trafficking is Off the Charts, so Texas State Attorney General Produced a Documentary to Alert the Public Waking Times (Judy B)

Opioids in the Suburbs The Weekly Standard (resilc)

My neighbor’s happy pup Piper playing in the North Carolina snow today–this is the Piedmont, mind you, not the mountains!We must have gotten close to a foot of the fluffy white stuff and she was loving it!

Naturally it was a snow day across the board–school and work cancelled, no one driving anywhere if they could help it, cuz I think maybe they have like 1 snow plow here or something.

And a bonus. Are they ravens? Tracie H: “Heckle and Jeckle discussing the WSJ while watching golfers at the Trump National Golf Club in Rancho Palos Verdes, California.” 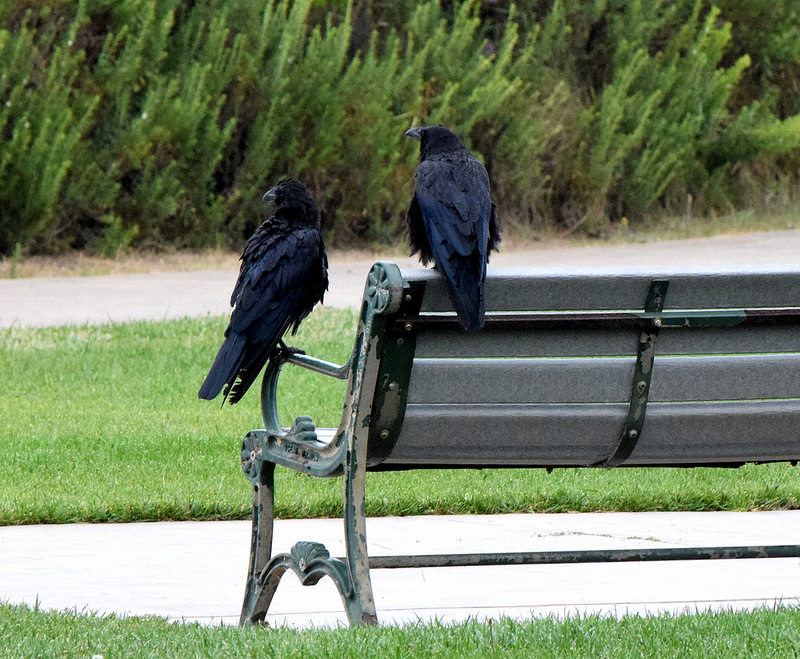