Retirement ages in industrialised countries have been rising over the last three decades as more people work later into their lives. This column focuses on Germany, examining this trend and the contributing factors. Despite comparable trends in health, educational attainment, and spouse’s labour force participation, these three factors do not appear to explain the rise in retirement age. Instead, changes to public pension rules seem to be the key driver.

Life expectancy has risen dramatically almost everywhere in the world. At the same time, the retirement age has fallen in industrialised countries, putting enormous pressure on their pension systems. More recently, however, working in later life has made a comeback. Employment rates of people aged between 55 and 64 have increased in most OECD countries since the late 1990s (OECD 2017), in a stunning reversal of the long declining trend that began in the early 1970s. The average employment rate for people of this age in OECD countries was 44% in 2000, and reached 58.4% in 2016.1 Will the current rising trend in labour force participation continue, reducing the negative consequences of ageing on fiscal sustainability, or will participation slow down again?

Explaining the causes of this stunning reversal of labour force participation at older ages is the current aim of the International Social Security Project (ISSP).2 The project scrutinises the interactions between social security schemes and retirement behaviour, covering 12 western industrialised countries (nine EU countries, the US, Canada, and Japan).

In this column we focus on Germany (Börsch-Supan et al. 2017), the country that has experienced the greatest increase in the employment rate among the 55-64 age group. Germany used to exhibit a relatively low level of old-age employment (38% in 2000 for the 55-64 age group). Fourteen years later, this rate has reached a stunning 69% (OECD 2017). Figure 1 shows this trend reversal among German men over 55. The picture is more complex for women, who experienced a rather constant increase among the 55-59 age group and a mild reversal among the 60-64 age group (Figure 2). 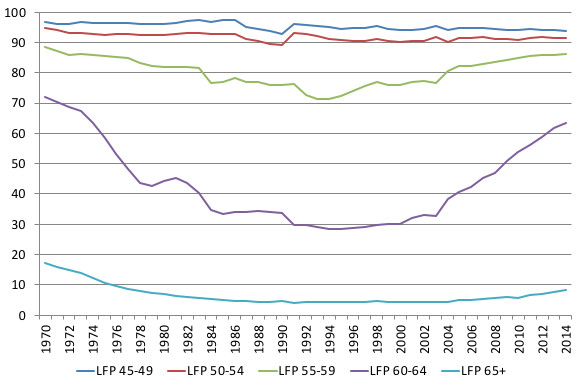 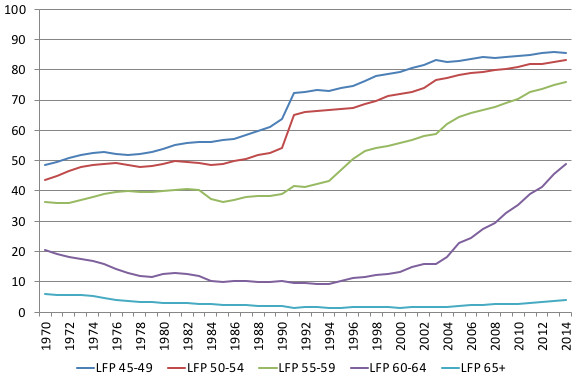 One set of causes for the trend reversal in old-age labour force participation could be historical trends. Younger cohorts are healthier and have been better educated, allowing for longer working lives. Also, the role of women in society has dramatically changed, affecting the labour force participation of both genders. How much of the trend reversal can be attributed to these secular developments? 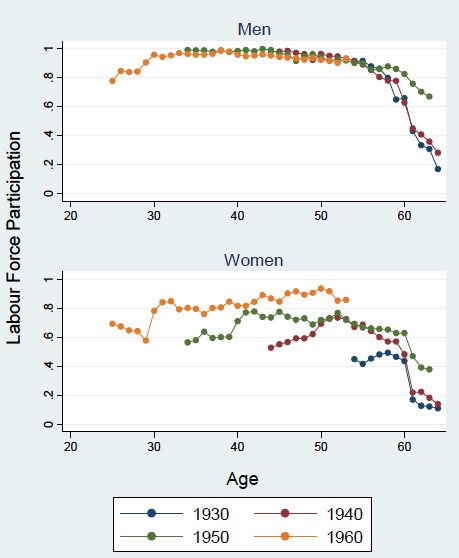 Digging a bit deeper into the historical trends, we first look at health. Figure 4 shows cohort mortality rates at age 60 by gender since 1960. It depicts a clear downward trend – during the last five decades, the mortality rate has halved for both men and women. We suppose that this declining mortality reflects health improvements also at earlier ages which, in turn, should generate a greater ability to work. 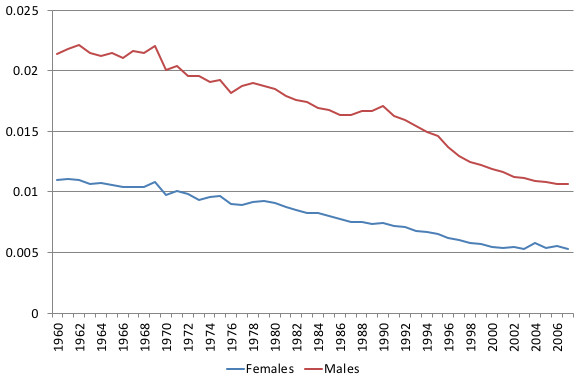 Educational attainment is another important historical trend and a crucial determinant of labour force participation. Greater education can be expected to increase the ability, willingness, and opportunities to work at older ages.3 Figures 5 and 6 show the trends for an upper secondary (high-school) and post-secondary (college) education by gender and age group. For both genders and in all age groups, the proportion of individuals with a high-school or college education has been increasing.

Figure 5 Percentage with high-school diploma by age group and gender, 1984-2013 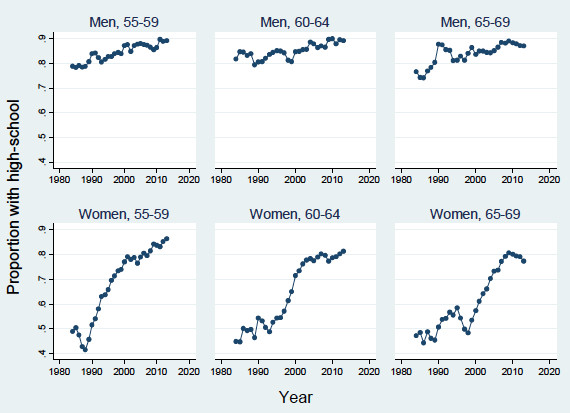 Figure 6 Percentage with college degree by age group and gender, 1984-2013 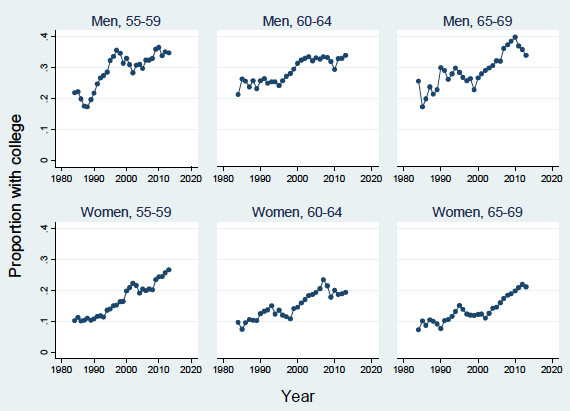 Labour demand factors – such as unemployment, gross wages, and occupational composition – may be important drivers of older individuals’ labour force participation as well. Looking at unemployment of older workers, this seems to have been indirectly affecting the labour force participation of older workers through the effects of public pension and labour market regulations, rather than being a cause of early labour market exit in itself (Börsch-Supan and Schnabel 2010). Gross wages have clearly been increasing for both men and women, although growth seems to have slowed and even reversed, especially for men, during the 2000s. This trend characterises wages of all workers in Germany, however, as documented in Brenke (2009).

The final factor we consider is spouse’s labour supply. If couples have a preference for shared leisure time, we can expect a joint retirement decision.  Even if we cannot rule out that married men could have responded to the increase in their wives’ labour force participation by postponing their exit from the labour market, we note that the trends for single and married men look very similar.

In order to more formally analyse the contribu­tion of some of the most prominent historical trends – education, health and spouse’s employment – to the overall evolution of labour force participation, we perform a simple decomposition analysis, following the strategy used by Schirle (2008) (Börsch-Supan et al. 2017). Very broadly, this method consists of fixing a baseline year (in our case, 1984) and creating for any subsequent year counterfactuals of the participation rate, had each factor remained as at was at baseline. The counterfactual thus shows the evolution of labour force participation over this entire period had the historical trends of education, health and spouse’s employment had been absent.

The picture for women (Figure 8) appears even less supportive of the hypothesis that education, health, or spouse’s employment are the main drivers of their strongly increasing labour force participation. The effect of education in particular seems smaller than expected in light of the steep increase in women’s educational attainment discussed above. 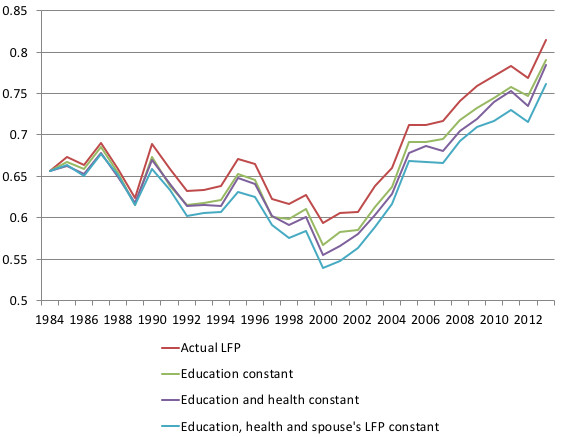 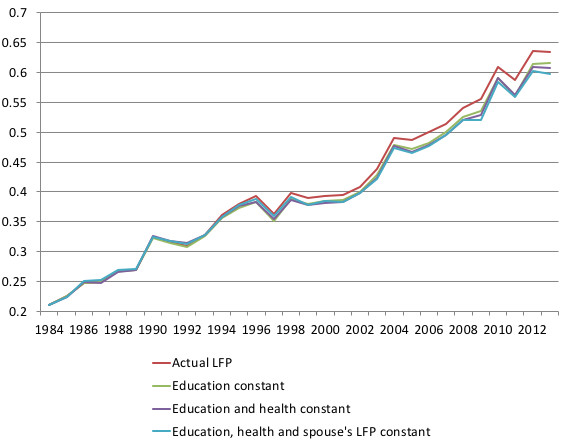 The Role of Public Pension Rules

If it wasn’t health, education or women’s emancipation, what else has happened during the time of the trend reversal? We argue that public pension rules have played a crucial role (Börsch-Supan et al. 2018a). However, summarising the many law changes affecting labour force participation at older ages in a way that is conducive to quantitative analysis is not straightforward. We have taken an inventory of all policy changes that occurred since 1980,4 and compute accordingly the life-time value of public pension benefits as a function of retirement age. We relate the difference between the life-time value at a given retirement age and the life-time value when retiring one year later to the earnings of this additional year of work, and refer to the resulting number as an ‘implicit tax’ on working.

Figures 9 and 10 show that this implicit tax on working was very high until about 2000 for both men and women (40% or higher). The implicit tax then sharply decreased, especially for early retirement ages. Most of these effects were due to actuarial adjustments to claiming early benefits, which were introduced in 1992 and came into effect at the end of the 1990s. This cohort-specific intervention led to accentuated implicit tax rates at specific age steps. The conversion to a pension system with deferred taxation in 2005 has reversed this and resulted in slightly higher implicit tax rates again. 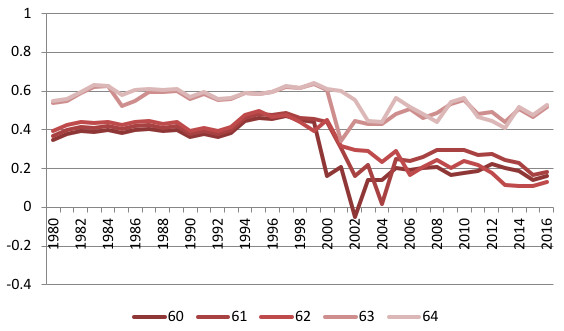 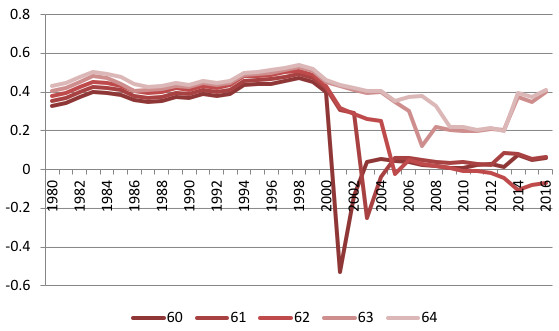 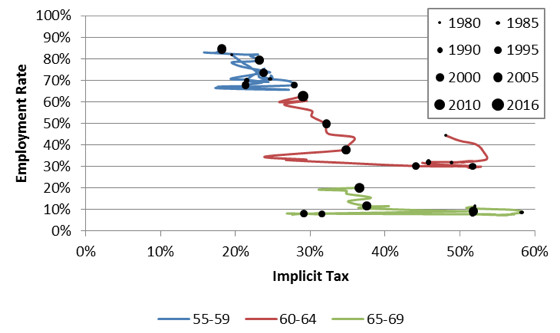 Conclusions and Next Steps

The evidence in Figure 11 suggests that much of the trend reversal of older men’s labour force participation may be explained by changes in public pension rules. However, this bivariate correlation does not control for the many other potential explanatory factors and the heterogeneity in the population. The next step for the International Social Security Project will therefore be a causal analysis of the role of public pension policies in shaping labour force participation. We are doing this by constructing, for each individual and separately for each country, time series of the implicit tax. We will then use these incentive variables, the macro variables considered so far, and other determinants at the individual level as explanatory variables in an econometric analysis of retirement and labour force participation.