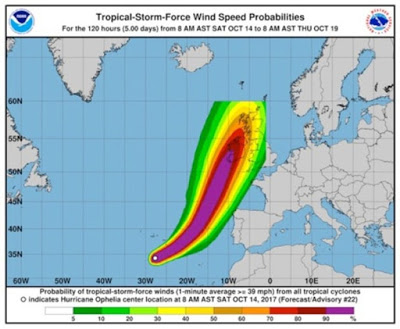 The warning chart that NOAA issued shows Hurricane Ophelia ending in a straight line at 60 degrees north latitude, because the computer program never anticipated a hurricane so far north (source).

A little while ago I looked at the coming year (and the next few years), saw a “train wreck” coming, and wondered whether it would be more worth writing about the train wreck or about something more interesting:

When we think of economic crossroads, those who don’t regret the failed Obama opportunity of 2009 … think of Sanders, Clinton and Trump; the Failed Revolt of 2016; and the road not allowed to be taken.

Our betters chose another path for us, and the rest, I’m afraid, will merely be consequences, the train wreck mentioned above, easily foreseen. Perhaps we won’t write about the train wreck after all, but something less widely anticipated.

This is about the train wreck. It’s also about a surprising opportunity from a surprising source, our dimwitted President Trump and his wrecking crew.

In a recent Rolling Stone piece entitled “Winning Slowly Is the Same as Losing,” climate writer Bill McKibben said, “If we don’t win very quickly on climate change, then we will never win. That’s the core truth about global warming. It’s what makes it different from every other problem our political systems have faced.”

As an example, he cites the ice fields of Antarctica. “The latest models show that with very rapid cuts in emissions, Antarctic ice might remain largely intact for centuries; without them, we might see 11 feet of sea-level rise by century’s end, enough to wipe cities like Shanghai and Mumbai ‘off the map.'” In this case, “off the map” means literally off the map — non-existent; no where to be found on the earth.

For reference, note that the USGS lists the amount of ice sequestered in the Antarctic ice as the equivalent of 72 meters of sea level rise. That’s quite a lot. Think of it as 240 feet — or 80% of an American football field — stood vertically. To see what that means on a map, click through to these speculative National Geographic maps from 2013; note though, as you do, that its numbers are out of date and too low. The situation will very likely be worse.

By any reckoning, the speed of change to our climate is catching most people off guard. For example, consider the map at the top. It shows a storm so far north that the computer programmers didn’t consider it necessary to allow it to be fully mapped.

McKibben writes, “Another way of saying this: By 2075 the world will be powered by solar panels and windmills – free energy is a hard business proposition to beat. But on current trajectories, they’ll light up a busted planet. The decisions we make in 2075 won’t matter; indeed, the decisions we make in 2025 will matter much less than the ones we make in the next few years. The leverage is now.”

Which brings us to the Trumpian good news.

Trump Has Taken Business As Usual — “Predatory Delay” — Off the Table

If Trump were not president, we might well be noodling along in that same happy valley where nothing much is being done — but much is made of the fact that much appears to be happening — and that thought comforts us.

The oil industry, of course, wants it this way, wants us in that happy state of seeing incremental change as “good enough.” Considered in that light, the Paris Accord on climate is their best friend. They get to look like they’re on the right side of history, by supporting climate “progress,” while relentlessly digging up all of their buried cash — disguised as unextracted oil and gas — until the last cubic centimeter is sold and burned.

McKibben sees it that way too:

The planetary futurist Alex Steffen calls this tactic “predatory delay, the deliberate slowing of needed change to prolong a profitable but unsustainable status quo that will be paid by other people eventually.” It’s not confined to the moneybags at the oil companies and the utilities – he’s written extensively about the otherwise-liberal urbanites in his home state of California. “A lot of cities are happy to talk about providing their power cleanly, but reducing cars, densifying, spending on bike paths, raising building standards – those things are all so contentious they’re not even discussed.” Ditto the folks who block windmills out of fear of chopping birds, thus helping lock in the next great mass extinction. … In careful language that might have been written by a team at Exxon, the union [that builds pipelines] said it supported new pipelines “as part of a comprehensive energy policy that creates jobs, makes the United States more competitive and addresses the threat of climate change.” “Comprehensive,” “balanced,” “measured” are the high cards in this rhetorical deck. “Realistic” is the ace in the hole.

Note that this is an encouraged and well-advertised policy, these reasons for delay. You heard the same arguments when the last administration talked about its “all of the above” energy strategy as a “path to sustainable growth.” Growth in industry profit, of course, but death for millions of its victims.

Now all of that “reasonable” incremetalism is off the table, at the same time that data about the possibility of effective emergency action is coming available. McKibben writes that “if we wanted to power the planet on sun and wind and water, we could. It would be extremely hard, at the outer edge of the possible, but it’s mathematically achievable. Mark Jacobson, who heads Stanford’s Atmosphere/Energy program, has worked to show precisely how it could happen in all 50 U.S. states and 139 foreign countries – how much wind, how much sun, how much hydro it would take to produce 80 percent of our power renewably by 2030.”

I said earlier that Trump wasn’t the whole problem – in fact, it’s just possible that in his know-nothing recklessness, he has upset the ever-so-patient apple cart. You could almost see the oil companies wincing when Trump pulled out of the Paris Agreement – for them, the agreement was a pathway to slow and managed change. The promises it contained didn’t keep the planet from overheating – indeed, even if everyone had kept them, the Earth would still have gotten 3.5 degrees Celsius hotter, enough to collapse every ecosystem you’d like to name. The accords did ensure that we’d still be burning significant amounts of hydrocarbons by 2050, and that the Exxons of the world would be able to recover most of the reserves they’ve so carefully mapped and explored.

But now some of those bets are off. … [W]ith Washington effectively gridlocked, the fight has moved elsewhere. When Trump pulled out of the climate accords, for instance, he explained that he’d been elected to govern “Pittsburgh, not Paris.” The next day the mayor of Pittsburgh said his town was now planning on 100 percent renewable energy, a pledge that’s been made by places as diverse as Atlanta, San Diego and Salt Lake City. Next year, representatives of thousands of regions, provinces, cities, parishes, arrondissements, districts and counties will descend on San Francisco for a Paris-like gathering of subnational actors[.]

This is the Trump opportunity. By sweeping the incrementalism so beloved of Establishment regulars off the table, and by forcing people at the state and local level to solve the problem themselves, Trump has handed the climate movement a gift he should be thanked for.

We were never going to win the climate war with “reasonable” people in charge, no matter their party. In real terms, if Clinton were president, we’d have been no better off. McKibben’s title is deadly accurate — in this fight, winning slowly is exactly the same as losing. The only road to success involves sustained and forceful bursts of emergency action.

Will Americans take the opportunity they’ve been handed — freed of the handcuffs of the incrementalist Democratic Party — to start to win quickly? It’s entirely possible. After all, no one in the climate movement today thinks our government offers even a shred of hope. They’re moving on without it.

We may still watch much of our virtual village go under the waves, but at least we now may put up a fight to save it.