Yves here. This discussion of Britain’s unwritten constitution is over my pay grade, but I thought this piece might provoke some informative discussion from our UK-based readers (and recent expats).

By Andreas Rahmatian, Professor at the School of Law, University of Glasgow. Originally published at openDemocracy

More than it thinks, Britain may need its membership in the EU for the preservation of its national integrity and of its ancient constitutional settlement.

After a preliminary agreement in December 2017 phase two of the Brexit negotiations has begun. Still, there seems little awareness that Britain might experience considerable internal constitutional and political changes as a result of its departure from the EU, including the risk of the disintegration of the country altogether.

Unlike its European counterparts, Britain has an unwritten and essentially still feudal constitution with a constitutional continuity since 1689 (in the case of England) or 1707 (when England and Scotland together formed Britain).

Feudalism is still the ultimate framework of the British state. Therefore in England and Wales every ‘landowner’ is still a feudal tenant of the Crown, and the legislative and executive institutions, in particular the Crown and Parliament, have a feudal root.

This feudal constitution is not an irrelevant historical baggage in a modern, and perhaps federal, democracy. Feudal systems are by nature centralist: if the regions had too much autonomy, the state would fall apart (such as historically in Germany); if the central power was strong (such as in France), the state could continue to exist as a unitary entity. In a feudal state structure, genuine federal systems are not possible, and indeed, they do not exist in the UK: what we have is an ‘asymmetrical’ devolution, that is, in Scotland, but not in England.

The impossibility of a federal system across the UK is reinforced by the fact that the source of legislative power still emanates from the British Parliament in London, not from a (written) constitution which could then also enact a genuine federalism, with autonomous federal parliaments in all parts of the country.

Therefore the existence of Scottish devolution and the Scottish Parliament with its law-making powers is dependent on the continued support of the Westminster Parliament. That can change at any time, and Scottish MPs will never have a majority in Westminster to prevent this. Parliamentary sovereignty means that no future Parliament can be bound by a previous Parliament: this is undisputed.

Moving on From Here

The Westminster Parliament has recently enacted s. 63A of the Scotland Act 1998 according to which the Scottish Parliament and government are ‘a permanent part’ of the UK constitution, and the Supreme Court decision of R. (Miller) v. Secretary of State for Exiting the EU in January 2017 has confirmed that.

But this is the same idea of self-limitation of sovereignty by Parliament that has been used to explain EU membership and submission to the supranational legal system of the EU. It is precisely that legal order which the UK seeks to leave, so that the constitutional reconciliation of parliamentary sovereignty with (former) EU membership is a questionable precedent for devolution.

Indications that the Scottish devolution system may suffer after Brexit are already there. The European Union (Withdrawal) Bill, in its original version, expects powers currently with the EU to revert as central powers to London, not as devolved powers to Edinburgh. In R. (Miller) the Supreme Court made clear that Scotland and Northern Ireland have no legal veto on the UK’s withdrawal from the EU, although they voted in favour of EU membership. 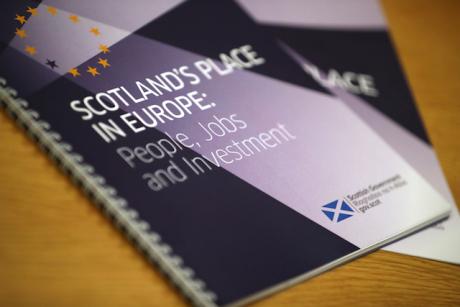 A copy of the Scotland’s Place in Europe document during meeting at the Scottish Parliament, in Edinburgh, to discuss amendments to the European Union (Withdrawal) Bill, February 1, 2018. Jane Barlow/Press Association. All rights reserved.

Both positions are constitutionally perfectly sound. This demonstrates that Britain could establish a partial system of federalism for Scotland more easily because it has been a member of the EU where the position of being a unitary sovereign nation state is less relevant: a Member State is embedded in a supranational legal and political framework. Once Britain is on its own after Brexit, the assertion of its national unity and centralist integrity will become much more significant. Scotland may object to these effects, as well as Northern Ireland and Gibraltar. More than it thinks, Britain may need its membership in the EU for the preservation of its national integrity and of its ancient constitutional settlement.

Will of What People?

This situation also shows that parliamentary sovereignty is enshrined in the unwritten British constitution, but democracy less so; at least there is no functioning minority protection: the people of Scotland, Northern Ireland and Gibraltar who have clearly voted against Brexit are apparently not part of the proverbial ‘will of the people’.

The ancient prerogative of the Crown only emphasises that malleable notion of the ‘will of the people’ where the ‘people’ are really a kind of part-time sovereign. The British government’s view that, based on the prerogative of the Crown, Art. 50 of the Treaty of the EU can be triggered by the government without the involvement of Parliament may appear appalling for modern democratic systems, but is not an absurd position under present British constitutional law. R. (Miller) proved the government wrong, but the decision confirmed the royal prerogative in principle.

Theoretically, goodwill from all politicians may help maintain political stability. But constructive goodwill is still in contrast to some Brexit politicians’ attitude. The British government has set up Britain effectively as a direct political and economic competitor to the EU, not as a partner. Why should the EU then be interested in a comprehensive trade agreement or in the integrity of Britain after Brexit?