Yves here. One could pose a more general question: When do mainstream Democrats not speak with a forked tongue? But here, they appear to have been honest via their silence. 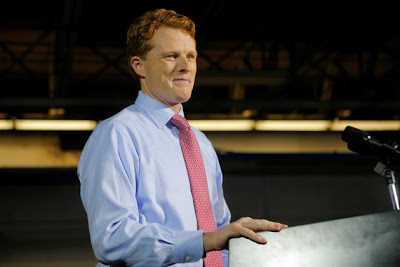 Rep. Joe Kennedy III gives the official Democratic Party response to Trump’s State of the Union address (source). Can he see global warming from his house? Unlike the rest of us, apparently not.

I raise the following questions because, as regular readers know, the coming climate disaster is regularly on my mind.

Or do they, like President Obama, want an “all of the above” energy strategy that maintains fossil fuel use (and continually enriches Big Oil firms) into the indefinite future?

As a candidate in the 2016 Democratic primary, Hillary Clinton pointedly and angrily refused to stop taking money from fossil fuel lobbyists, nor would she commit to banning fracking.

For the 2018 cycle, very few Democratic candidates for national office support a ban on fracking, and very few (about 45 candidatesby my count) have signed the pledge not to take money from Big Oil in any of ways it hands out money: “Taking the pledge means that a candidate’s campaign will adopt a policy to not knowingly accept any contributions over $200 from the PACs, executives, or front groups of fossil fuel companies”.

Just 45 candidates have signed at last count, among literally hundreds of Democratic Party primary and general election candidates. And most of the signers are of the rebellious “Bernie Sanders” stripe — Randy Bryce, Ro Khanna, Doug Applegate, Kevin de Léon, to name a few — people, in other words, generally unwelcome at Party leadership tables and events.

And now comes the “official” Democratic Party response to Trump’s State of the Union address to Congress — from good-looking, groomed-for-Party-success Rep. Joe Kennedy III (Mass.) — and not one word about the climate.

Democrats Ignore Climate Change In State Of The Union Rebuttal

Sen. Bernie Sanders (I-Vt.) was the only one to bring up global warming after the second-hottest year on record.

The Democratic Party omitted any mention of climate change in its rebuttal Tuesday to President Donald Trump’s first State of the Union address.

In his speech, Rep. Joe Kennedy (D-Mass.) didn’t bring up global warming, sea-level rise or the surge in global greenhouse gas emissions, which threaten to become worse as the Republican White House ramps up fossil fuel production to unprecedented levels.

The Democratic Party omitted any mention of climate change in its rebuttal Tuesday to President Donald Trump’s first State of the Union address.

In his speech, Rep. Joe Kennedy (D-Mass.) didn’t bring up global warming, sea-level rise or the surge in global greenhouse gas emissions, which threaten to become worse as the Republican White House ramps up fossil fuel production to unprecedented levels.

The 37-year-old former prosecutor and grandson of Sen. Robert F. Kennedy (D-Mass.), who was assassinated in 1968, lamented the Trump administration’s “all-out war on environmental protection,” made a passing reference to a “coal miner” and lionized Americans with the courage to “wade through floodwaters, battle hurricanes, and brave wildfires and mudslides to save a stranger.”

Yet, like Trump, the Democrat neglected critical milestones in the climate crisis in his speech.

I don’t count this an error, but a strong indicator of policy. And if Kennedy or another corporate-representing Democratic Party official rises up later to adjust this “oversight,” I recommend discounting it, just as you would discount a statement like “Of course I love you” that comes many days or weeks later than when it should have been said.

Who Is Joe Kennedy III?

Joe Kennedy III is being called, for all of the obvious reasons, a “rising star” in the Democratic Party. And certainly, Democrats are positioning Kennedy as such by handing him the opportunity to give the Party’s official response.

Why am I calling him a “corporate-representing” Party official? Here’s a list of his top contributors for the previous 12 months (h/t Lee Fang): 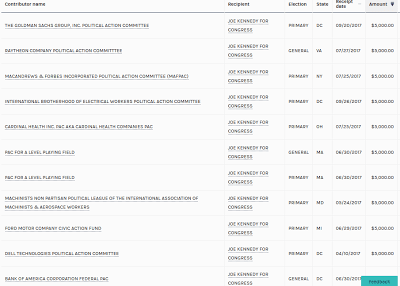 Rising star Joe Kennedy is also one of the fewer-than-100 House Democrats still not backing Medicare for All. He’s opposed to free public colleges, taxing Wall Street, and marijuana reform. In 2015, for example, Kennedy voted to let the DEA arrest medical marijuana patients and providers.

He is kindly described as a “backbencher” and less kindly as “corporate owned.”

The best characterization of Kennedy I came across in researching this piece is by Michael Steel, former press secretary to John Boehner: “Rep. Joe Kennedy (Mass.) is an old Democrat’s idea of what a young Democrat should be.”

Can Democrats Free Us from Fossil Fuels?

Back to the original question and why it matters. First, do mainstream, Party-backed Democrats really want to bring carbon emissions to zero in a strong, proactive way? Apparently, obviously, not.

Second, if mainstream Democrats won’t commit to freeing us from the death grip of oil and gas companies — and, I have to say it, the death grip of the money-obsessed sociopaths who run them — then this country will never free itself, not ever, even after the crisis is so far advanced that even a brick knows to take action. That refusal will leave a mark on us that will last millennia, assuming our species survives that long.

Third, if mainstream Democrats, as they continue to be challenged by Sanders and others to adopt climate policies that are actually effective, publicly refuse to do so — well, that’s going to leave a mark on the Democratic Party at the ballot box as well.

It won’t be as long-lasting a mark as the other one, but it could doom the Party to irrelevance for the next generation, or until actual progressives actually challenge — in a Party-dividing way — the corporate-owned for leadership, and win.

What are the odds of that happening in time to make a difference? 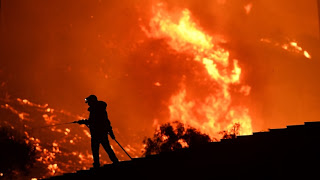