As readers probably know, the giant California public pension fund CalPERS is underfunded in a serious way as a result of taking a contribution holiday in the dot-con era when it looked like it had too much cash on hand, and then taking a big hit in the crisis. CalPERS has embarked on trying to implement a major change which is clearly counterproductive: that of handing off private equity investing to costly middlemen, incurring an additional layer of unnecessary fees. Even worse, as we’ll describe below, CalPERS has reasons to believe that this scheme cannot improve performance enough to make up for the fees.

Let us underscore the significance of this information: CalPERS clearly recognizes that the odds favor that outsourcing will be a lose/lose proposition. CalPERS will lose on fees and will more importantly is likely to lose on returns too. This means its staff, and if it goes along, its board, is knowingly violating its fiduciary duty to beneficiaries.

As we have chronicled for several years, CalPERS has been pinning undue hopes on private equity as the salvation for its underfunding problem. But private equity has come under deserved criticism for not generating enough in returns to compensate for its outsized risks, a cardinal sin in investing-land, along with the discovery of widespread abuses by general partners that include what amounts to embezzlement.

CalPERS has also made a number of gaffes with respect to its private equity program, such as falsely saying it could not track carry fees (it was forced into recanting and getting the information) and acting as if it did not understand how a fundamental element of private equity investment, management fee offsets, operates.

Rather than upping its private equity game as other investors have, by doing more investing directly so as to save staggering private equity fees and costs estimated at 7% per year, CalPERS instead appears to be letting PR considerations and potentially even worse motives trump its paramount responsibility: managing its money for the good of beneficiaries and California taxpayers, who ultimately backstop the giant fund.

Below we’ll describe how CalPERS already has strong evidence that its outsourcing scheme, which amount to hiring a fund of funds manager, is likely to produce the worst of all worlds: inferior performance and higher fees, on the order of $50 million a year plus a profit share.

The slide below, prepared by CalPERS’ private equity consultant Meketa, and being presented at today’s Investment Committee meeting, speaks for itself: 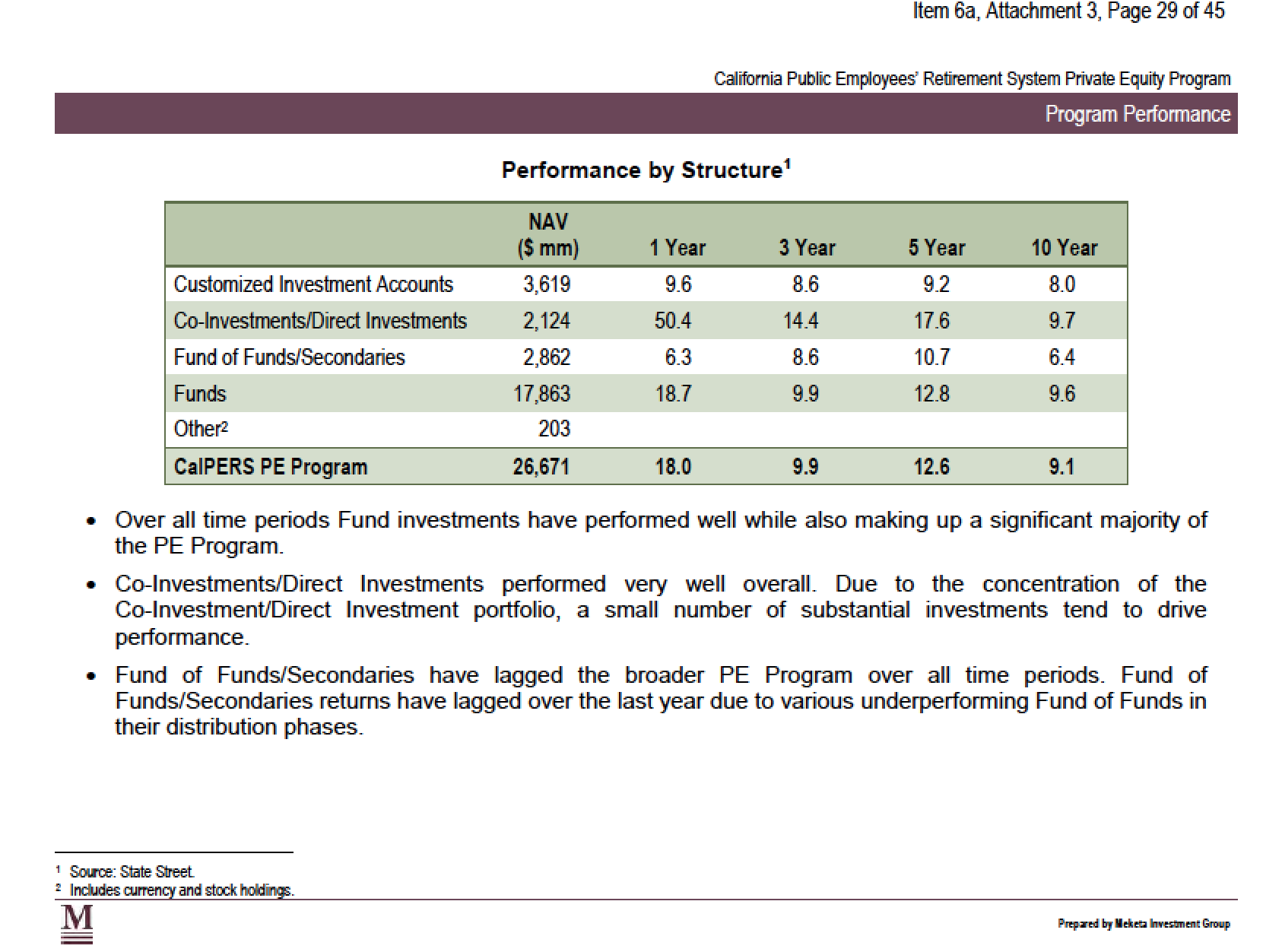 In every period measured, fund of funds dragged CalPERS’ private equity results down. In all time frames save one, they were the worst way to go. The second worst performer was “customized investment accounts”. Even if CalPERS tries arguing that what it is planning to do with BlackRock or whoever it winds up choosing won’t be exactly like a fund of funds, the other possible precedent hasn’t done well for CalPERS’ beneficiaries either.1

And by contrast, what approach did the best? By far, co-investments and direct investments, the approach that other large institutional investors are pursing more and more aggressively and that we’ve advocated as the most promising strategy for CalPERS in private equity.

In other words, rather than build on success and strengthen its capabilities, CalPERS is planning to double down on failure as well as weaken itself as an institution.

A February 2 article by Sam Sutton at PE Hub, CalPERS board has `unanswered questions’ about hiring of outside partner, contained including this key bit of information:

According to former board member JJ Jelincic, whose eight-year tenure on the board ended earlier this year, CalPERS CEO Marcie Frost told him that some PE firms intimated they wouldn’t welcome new commitments if the retirement system were directing them from a third party like BlackRock.

This has always been a real risk. We’d discussed that general partners like KKR and Blackstone might not allow a BlackRock venture to invest in their funds. It’s one thing if BlackRock had limited ambitions for its private equity efforts and wasn’t planning on going beyond offering funds of funds. But BlackRock has made clear that gearing up in private equity funds is a top strategic priority. Why should other big private equity players help a competitor by letting it see in considerable depth how they do business?

And that concern goes double for two more of the six names that CalPERS is considering for the outsourcing role, AlpInvest Partners, which is a subsidiary of Carlyle, and Goldman Sachs.

Having said that, not every general partner will necessarily regard a BlackRock or a Goldman as a threat. The ones most likely to take umbrage are the mega-players that are diversified fund managers, such as Apollo, Blackstone, and KKR. But they also collectively represent a meaningful chuck of total private equity investment opportunities.

There is no way that restricting CalPERS’ investment universe could be presented as being a plus for returns. The odds favor it hurting CalPERS’ beneficiaries. Indeed, even though Ted Eliopoulos has yet to offer a rationale for why going to an outsourcer would deliver better returns for CalPERS, the closest he has come has been his insinuation that the bad press that CalPERS is getting in private equity has somehow led the fund to be missing private equity opportunities. Industry experts like North Carolina’s former Chief Investment Officer Andrew Silton have rejected that notion out of hand.

But if even Eliopoulos’ evidence-free efforts to blame CalPERS’ less than stellar private equity performance on media meanies scaring big tough money-minded general partners away had any truth, CalPERS needs to weigh that against actual saber-rattling by general partners.2 If CalPERS is going to have a smaller investible universe as a result of investing through BlackRock, it can’t possibly help returns.

Now one might argue that the threats by the KKRs of this world are mere posturing, and might even have been a gambit to get included on the list of fund of fund manager candidates. But unlike the almost-entirely-empty threats of general partners to exclude investors that were too insistent on transparency, giving strategic assistance to direct competitors would seem to be a bigger business risk than having your performance made public. So at a bare minimum, if CalPERS is going to keep pursuing this bone-headed idea, it needs to treat the general partner threats as a major due diligence item.

Anyone who has spent any time in investment management knows that discretionary accounts are regularly turned into stuffees. The classic example is brokerage firms pressuring salesmen to put their clients into in-house mutual funds even when they are dogs (in addition to constant nagging and overt threats, the brokerage firms would give bonus sales credits to make up for brokers burning their meal tickets).

Recall that the misleadingly-named “request for information” for the private equity outsourcing scheme states clearly that the “partner” will have investment discretion.

With BlackRock, a relative newbie in private equity, the incentive to put CalPERS money in BlackRock funds that BlackRock would pass on if they were run by anyone else, will be strong. BlackRock is a public company. Showing growth in private equity assets under management and revenues will be core to its growth story. Remember the lengths Wells Fargo went to to generate evidence to back its pitch to the analyst community?

It’s not hard to anticipate and rebut CalPERS’ response. CalPERS staff, or at worst, its outside legal counsel, is sure to notice if an outsourcer who also had its own private equity funds drafted the agreement in a way that allowed the outsourcer to put CalPERS monies in its own fund. But when CalPERS protests, the outsourcer is likely to respond along the lines of: “We’ll set up a special review any time we want to do that and allow you to veto it.”

The problem is that CalPERS, by having hollowed out its private equity staff, will have even less confidence and skills than it has now to say no. Moreover, even in its better days, CalPERS’ track record of saying “no” to private equity firms hawking supposedly great deals is less than stellar. Recall that we wrote at some lengths about how CalPERS took a well over $100 million bath on a $275 million stake in the Silver Lake entity that manages its funds (what you’d colloquially call the “general partner”). How could a deal like that have come a cropper?

CalPERS was persuaded by Silver Lake to agree something no prudent equity investor should ever accept: not having an anti-dilution provision. CalPERS was apparently given the “trust me” pitch and capitulated. Given how obsequious Chief Investment Officer Ted Eliopoulos is towards private equity firm principals, it’s hard to imagine him ever standing up to them.

Needless to say, the more one looks at the CalPERS private equity outsourcing scheme, the more rancid it appears. The board should save CalPERS further embarrassment and put this terrible idea down.

1 Some defenders of fund of funds may try arguing that the reason for CalPERS abjectly poor performance in fund of funds is that CalPERS went into them for political reasons, such as to make investments in California. The wee problem with that argument is that CalPERS has yet to give anything that even dimly resembles an investment or economic argument in favor of its outsourcing scheme. The only conclusion we have been able to reach is that its motives are political: that it has not been able to manage the extra scrutiny its private equity investments receive, and that hiring an outsourcer is to reduce transparency. On top of that, many of its past fund of funds did not pay extra fees, so the underperformance here can’t be attributed to higher investment costs.

2 In subsequent conversation with Jelnicic about his remarks to PE Hub, CalPERS did not dispute the accuracy of what Jelincic said.