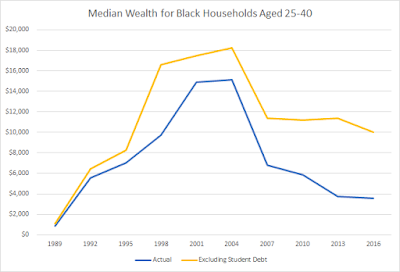 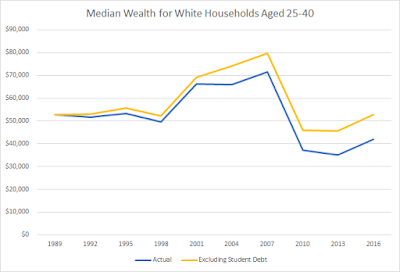 Compare the two charts above. They show median wealth of households headed by black individuals (top chart) and white individuals (bottom chart) between the ages of 25 and 40 in successive waves of the triennial Survey of Consumer Finances, with and without student debt. (Credit to Matt Bruenig for preparing these data from the SCF.)

As an interim addendum to our short series, “Killing a Predator — Cancelling Student Debt” — Part 1 here, Part 2 here — consider the observation above by Marshall Steinbaum, one of the co-authors (with Stephanie Kelton, Scott Fulwiler, and Catherine Ruetschlin) of the Levy Institute paper on student debt cancellation we’ve been looking at. It comes from a more general piece Steinbaum wrote for the Roosevelt Institute discussing his Levy Institute paper. I’d like to focus here on just that observation.

Before we look at more of what Steinbaum wrote, please note three things about the charts above.

Canceling all student debt would bring that differential down to “just” 5:1 — still shameful for a society like ours, but it shows what a great boon student debt cancellation would be for young black households.

Finally, note that while from 2013 to 2016 white wealth for these households has recovered somewhat from the Wall Street–caused “great recession,” black wealth has recovered not at all.

One thing that immediately becomes clear upon investigation of the student debt crisis is the extent to which it is a creature of this country’s legacy of racial discrimination, segregation, and economic disadvantage patterned by race. My prior researchwith Kavya Vaghul found that zip codes with higher population percentages of racial minorities had far higher delinquency rates, and that the correlation of delinquency with race was actually most extreme in middle-class neighborhoods. What this tells us is that student debt is intimately bound up with the route to financial stability for racial minorities.

In that work, we ascribe this pattern of disadvantage to four causes: segregation within higher education, which relegates minority students to the worst-performing institutions, discrimination in both credit and labor markets, and the underlying racial wealth gap that means black and Hispanic students have a much smaller cushion of family wealth to fall back on, both to finance higher education in the first place and also should any difficulty with debt repayment arise. The implication is that while higher education is commonly believed to be the route to economic and social mobility, especially by policy-makers, the racialized pattern of the student debt crisis demonstrates how structural barriers to opportunity stand in the way of individual efforts. Insisting that student debt is not a problem amounts to denying this reality.

Moreover, while overall net household wealth levels for the non-rich increased between the 2013 and 2016 waves of the SCF for the first time since the Great Recession did violence to middle-class wealth, rising student debt weighed in the other direction—especially for black households. The time trend from these charts is clear: Student debt is increasingly burdening everyone, but that burden disproportionately weighs on black households.

Steinbaum refers to another study to explain why this is the case (emphasis mine):

A 2016 paper by Judith Scott-Clayton and Jing Li offers clues, since it tracks the debt loads of black and white graduates with four-year undergraduate degrees. They find that immediately upon graduating, black graduates have about $7,400 more in student debt than their white counterparts. Four years after graduating, that gap increases to $25,000. The crucial difference is simply that white graduates are likely to find a job and start paying down their debt, more-or-less as the system is designed, but black graduates are not—they carry higher balances, go to graduate school (especially at for-profit institutions) and thus accumulate more debt, and subsequently earn no better than whites with undergraduate degrees.

What this suggests is that any given educational credential is less valuable to blacks in a discriminatory labor market (probably because they attended less well-regarded institutions with weaker networks of post-graduate opportunity, and also because even assuming they did attend the same institutions as their white counterparts, outcomes for black graduates in the labor market are mediated by racial discrimination). … The assumption that debt-financed educational credentialization represents constructive wealth-building and social mobility thusreflects a failure to comprehend the landscape of race-based economic exclusion.

The interaction of student debt with “race-based economic exclusion” provides a powerful argument for student debt cancellation all on its own. Something to keep in mind as this idea enters public discourse.